Over 70 cities have made commitments to reach 100 percent renewable energy, but only a few have made substantial progress toward achieving these goals that often have deadlines set in the 2030’s or beyond. With a population of just over 1.4 million people, San Diego, the country’s eighth largest city and the second largest in California, is also one of the largest to make a pledge to transition to 100 percent renewable energy.

Drawing on a unique policy tool allowing cities to choose their electricity supply and the area’s enviably abundant solar resources, San Diego is well on its way to developing a clear pathway for how to reach its goal.

Cody Hooven is the Chief Sustainability Officer for the City of San Diego, where she coordinates sustainability planning and policy, with emphasis on economic development. During the third episode in our multi-part Voices of 100% podcast series, Hooven recently spoke with ILSR’s Energy Democracy director, John Farrell about San Diego’s 100 percent pledge and the steps the city has taken toward fulfilling it.

Making a Climate and Business Case

San Diego made its commitment to go all-in on renewable energy in late-2015, and it set an ambitious deadline at that time to reach its target by 2035. While providing context about what motivated the city’s actions and urgency, Hooven initially cites their climate action plan and its vision to reduce greenhouse gas emissions.

“We looked at all our tools in the toolbox,” explains Hooven about the city’s climate action planning process. “Obviously, increasing renewable energy in general, came up as a large tool, a large and useful tool in the toolbox to reduce our emissions, and we thought why not go big on that goal.”

Strong support from key allies, including the city’s business community, gave the city cover to set an even more ambitious target and ensured the city’s plan would be more than words.

“We heard a lot from our business community,” Hooven recalls. “They wanted us to go big on this and be ambitious. It’s always nice to have to support of the business community, when you want to move an initiative forward like this.”

For earlier stories on San Diego, check our previous podcast episodes and posts:

A Pathway Forward in Community Choice

With a clear commitment and timeline in place, the next question for the city is: What pathway will lead the city to success? Hooven, her office, and the city are now working on a more detailed plan forward.

“You need a little bit of runway to figure out how to get there,” she explains. “You want to give yourself some room to… let the market transformation continue to happen. But, we committed to bringing a pathway forward.”

A couple different forks in the road could lie ahead. First, Hooven explains how the city could opt to work with its incumbent utility San Diego Gas & Electric, as a partner to help them reach their renewable energy commitment. The city has been in close talks with the utility to evaluate this option, developing a blueprint that will be brought to the mayor’s office and city council for review later this year. Earlier coverage of these negotiations, from the San Diego Union Tribune, suggests the utility may be dragging its feet in this process.

A second, potentially more attractive option could be for the city to take charge.

California is one of seven states with a policy enabling “community choice aggregation.” Such programs give cities more leverage and flexibility to decide who supplies their energy and allows them to broaden purchasing decisions to include cost, pollution concerns, and local economic benefits.

“Legislation was passed that allows local governments to purchase power, electricity, on behalf of residents and businesses and then partner with the utility to deliver it,” Hooven explains. “That allows us to be in control and in charge of the type of power, which means we could then determine we want to get to 100 percent by 2035 and actually make that happen.”

San Diego joins dozens of cities in the state and elsewhere considering community choice. An existing program in Marin County, Calif., provides an example of how local governments can exercise authority in energy purchasing decisions on behalf of customers in their community, even when they face opposition from incumbent, monopoly utility companies.

Learn more about how community choice aggregation programs work here, and find out which seven states, including California, have enabled this policy by exploring our Community Power Map.

Hooven has heard from some who believe these programs are still “too new” to implement. She believes it is these ideological challenges — and not technical ones — that loom largest. In fact, she suggests the rapid expansion of these programs illustrates their success and could even prove naysayers wrong, soon enough.

“We do see it growing pretty quickly,” Hooven explains of the expansion of community choice programs in California. “In the Bay Area… I think they’re predicting 70 or 80 percent of their load will be served by community choice programs in the next five or ten years. It’s a pretty tremendous and a fast shift. So, I don’t see any opposition coming from that structure itself.”

If San Diego pursues a community choice aggregation model, the city will need to decide on its mix of energy sources. Hooven stresses that the city seeks an energy portfolio “that is cost effective and renewable.” New technology will help.

As the economics of solar and battery storage continue to improve, San Diego has an opportunity to shift even more of its electricity generation locally. While the city already boasts abundant solar resources, Hooven thinks the city will do more to harness distributed energy resources like solar and the local benefits they bring.

“Solar is going to play a big role for us, we have the perfect weather and setting for it. It’s abundant here and can only expand, and we have a lot of companies that are growing in that space and providing job growth, as well,” Hooven notes.

Although the rate of change in technology in the energy sector provides San Diego with opportunities, details of how cities reach their 100 percent commitments can also be wonky and challenging for local officials and the general public to follow.

Hooven laments how the average person might only have time to think about energy issues for a few minutes a year as they pay their electricity bill. However, she is hopeful more will become engaged in charting the renewable energy path that San Diego is now on and take advantage of the benefits that will come along with this decision.

“If people hear about [a 100-percent commitment] in their city, I would encourage them to understand a little bit more because it’s exciting,” Hooven recommends. “It often can be fairly political, and it’s an interesting issue that can really provide some huge benefit to your city.”

San Diego illustrates how quickly the tone of the conversation around 100 percent goals can change, when the community does engage. Hooven points to this transformation as a sign of encouragement and that the city is heading in the right direction.

“Initially the conversation was: ‘You can’t do 100 percent, that’s not possible!’ And, just in a few short years, the conversation has shifted to a debate over how to get there, not whether it’s possible or not. So, that’s been a fun thing to watch.”

Want to hear other stories of how communities are making and implementing 100 percent renewable energy commitments? Stay-tuned for the next episode in our Voices of 100% series featuring Atlanta, Ga., in three weeks!

For an earlier interview about San Diego’s commitment to 100 percent renewable energy featuring Nicole Capretz, one of the authors of the city’s Climate Action Plan and now Executive Director at the Climate Action Campaign, check out this previous Local Energy Rules podcast episode: Getting San Diego Ready for 100% Renewable Energy.

You can find our recent report on solar energy and battery storage mentioned during the interview that explores the favorable economics of distributed energy resources, here: Reverse Flow: How Solar Plus Batteries Shifts Electric Grid Power from Utilities to Consumers, along with a related webinar and recent Building Local Power podcast episode. 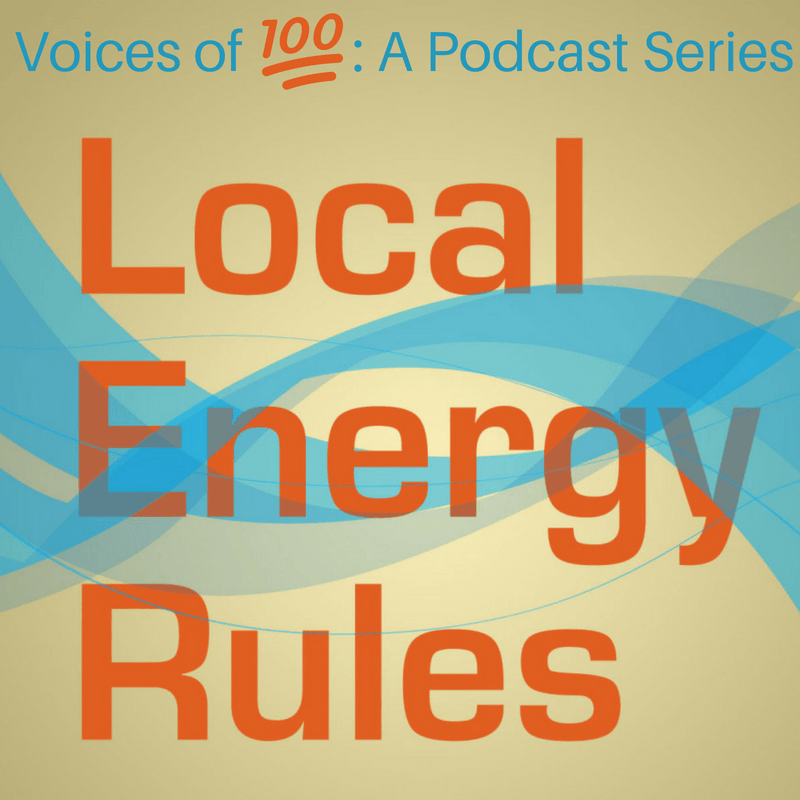 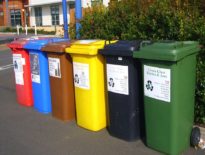