After a two year period with no incentive for community solar in Washington, legislators introduced and passed a 2022 bill “expanding equitable access to the benefits of renewable energy through community solar projects” (HB 1814). This marks an exciting milestone for Washington’s community solar advocates, as the 2022 bill incentivizes community solar development and prioritizes low-income communities through the creation of a grant-style fund. The program features a pre-certification option through the Washington State University Energy Extension program and payments to project developers, which can cover installation and some administration costs.

The restored incentive is better than nothing, but by relying on state funds, the state of Washington has yet to develop a robust community solar market.

Eligible projects also qualified for annual incentive payments to participating customers, based on the customer’s portion of the power generation of the project. The chart below shows the incentive rate for each year.

Around the same time that this incentive was created, the Washington Utilities and Transportation Commission approved a certification for incentive payments (RCW 82.16.170), which stated that community solar projects must be created by utilities, non-profits, or other local housing authorities and must have a minimum of  10 participants or 1 participant per 10 kW DC nameplate capacity, whichever is greater.

Clark Public Utilities received support from this early program. The utility maintains five community solar projects onsite at the utility Operations Center in Orchards. This project began generating electricity in June 2015 and was funded completely by participants. Participants received state production incentives beginning in 2017, when the early state incentive was implemented. All residential customers of Clark Public Utilities were eligible to purchase units, equal to 1/12 of a solar panel, for $100. In exchange, customers would receive energy generation credits on their electricity bills based on the number of units purchased. After the first project sold out in one day, four more projects were completed and units sold out in less than one month.

On March 12th, 2020, the Legislature introduced HB 2248 to increase equitable access by expanding community solar incentives for low-income participants. This incentive was intended to help solar project developers recover administrative start-up fees and was not to exceed $20,000 per project. After the Washington House and Senate signed off on the bill, Governor Inslee vetoed funding for the bill due to budget cuts spurred by the COVID-19 pandemic.

Listen to our early 2022 interview with Mason Rolph, President of Olympia Community Solar.

The 2022 bill incentivizes the building of solar projects through a grant-style fund. The $100 million fund, managed by Washington State University Energy Extension, can be used to fully cover the costs of solar installation. The project administrator can recover up to $20,000 in administration costs, as well. Washington State University must attempt to equitably distribute incentive funds throughout the state, and will do so by allocating funds based on the proportion of the state’s low-income customers served by each utility and other factors.

Everyone needs to be a part of the green energy future. In the past, solar energy incentive programs have primarily benefited people who can dole out cash for the panels and installation. We can do more to include everyone in the transition to a green economy and together, with this bill, we will.

Almost three years after the veto of HB 2248, Governor Inslee signed HB 1814 in 2022, approving the new community solar bill credit and grant program. The first round of grant funding will begin in late 2023, giving community solar administrators a one-time low-income incentive payment from a participating electric utility while enabling subscribers to earn credits on their electricity bills. This bill has garnered the support of many renewable energy advocates across Washington.

Community solar in Washington has looked different from the competitive, subscription-based programs in other states due to limiting rules and policies. One shortcoming has been the state’s limited flexibility in ownership structure. Flexibility, one of ILSR’s four principles for successful community renewable energy, is necessary for a competitive community solar market. Washington’s rules, in contrast, limit community solar ownership to utilities, non-profits, and tribal housing authorities.

Lack of flexibility does not preclude the program from having meaningful benefits, as non-profit organizations have jumped on the opportunity to bring solar to their communities.

In November 2020, Olympia Community Solar installed 297 solar panels onto the rooftop of the Hands on Children’s Museum in downtown Olympia, creating the Hummingbird Project. Instead of receiving credits on their electricity bill, customers make a one-time block purchase of $300 to buy a solar unit. Then, participants are sent back the value of their unit’s electricity production or they can donate their unit to a local non-profit. Additionally, instead of receiving the value of their electricity production directly from the utility, customers are reimbursed by Olympia Community Solar. Despite this unique model, the Hummingbird Project is the largest community solar project in Thurston County, with 800 solar units generating enough energy to power 12 homes.

The benefits of solar energy should be accessible to everyone, regardless of where they live or their income. This legislation is a small step in Washington’s progress toward a clean, affordable, and just clean energy transition.

Organizations like Olympia Community Solar will have more support under the 2022 bill expanding access to renewable energy.

For more on solar in Washington, check out these ILSR resources: 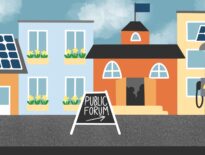 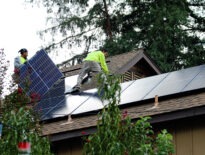