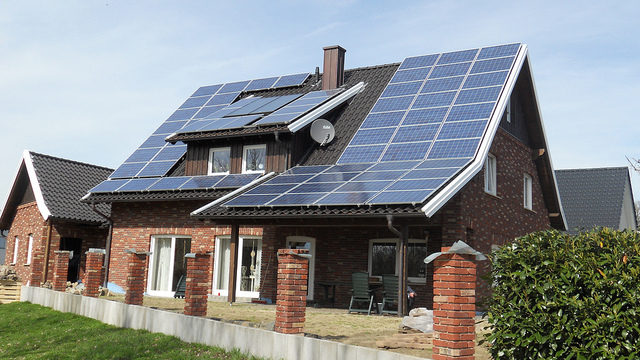 The publicly-owned Sacramento Municipal Utility District, or SMUD, had already installed the first utility-scale PV array in the nation back in 1984. By the early 1990s, the utility saw a potential for rooftop solar and launched its PV Pioneer program, placing dozens of solar arrays on their customer’s rooftops, for a fee. The standardized rollout meant dramatic declines in the cost of solar, long before the industry had launched anywhere else.

In June, ILSR’s Director of Democratic Energy John Farrell spoke with Brent Sloan, the “solar dude” at SMUD, to talk about these ahead-of-the-curve PV Pioneer programs and how his utility was created a viable rooftop solar market 20 years before other utility’s have “waved the white flag.”

From the Ground Up

In the 1980s and ‘90s, the electric utility industry was all about Big: big mergers, building bigger power plants, selling big amounts of energy. But the Sacramento Municipal Utility District in California decided to go another direction.

Unlike investor-owned utilities, beholden to shareholders, SMUD was and is owned by the local government. It had a history of being responsive to its customers, such as when it closed the Rancho Seco nuclear power plant just 14 years after it began operations. The closure, in 1989, was one of the catalysts for the utility’s search for energy alternatives like solar.

The PV Pioneer program launched in 1993, with the intention of rapidly driving down the cost of solar. The “secret sauce” was the utility’s buying-down power and providing a standardized solar panel package to its ratepayers, and  standard permit application to local governments. “You can have any solar system you want in Sacramento as long as it’s a black Model T,” Sloan says about the 2 kilowatt solar system then offered to all SMUD customers. The popular program asked customers to pay a $4 per month premium to host a SMUD-owned solar array on their rooftop.

By the late 1990s, the utility felt that cost reductions made customer ownership of solar more feasible, and its Pioneer II program offered subsidized, utility installed solar arrays to customers. In 2001, the total cost of a 2 kW solar array purchased under the program was $9,000 ($4.50 per Watt) with the customer’s share at just $6,000. That installed cost was nearly 10 years ahead of its time: $4.50 per Watt was the weighted average installed cost of all solar PV tracked by the Solar Energy Industries Association in 2011.

Sloan couldn’t vouch for the linked study where we got our numbers from, but he said the price drop from PV wasn’t magic. Before most others, SMUD workers were learning best solar installation practices, and potential solar contractors and building officials were then trained by the utility. Sloan and his team were crawling through attics, determining how many pounds of solar equipment could fit on the roof, long before industry-approved numbers became the norm.

Alongside the PV Pioneer program, SMUD created a standardized permit package for its several jurisdictions. That meant solar contractors could get a permit within 24 hours of submission and, for some time, all involved cities waived rooftop solar application fees for SMUD customers. The ultimate goal was to drive down the installed cost of solar far enough that SMUD and subsidies would not be necessary.

SMUD’s efforts were superseded—to some extent—by the statewide California Solar Initiative program, which dramatically diversified the solar market (to the potential disadvantage for cost reductions). Although solar installations have continued steadily for some time, SMUD customers have less financial incentive due to their low electricity prices (around 9 cents per kilowatt-hour).

“The biggest comment we get from contractors is, ‘When are you going to raise your rates?’” he laughs.

But that may be changing. Less than six months ago the municipal utility had 70 interconnections a month. Now it’s up to 300 a month.

On his own home, Sloan has 9 kilowatts of solar, getting him as close to 100% sun-power as possible (on a net annual basis). Though he benefits from net metering, he believes it’s a compensation arrangement that will have to change, and time-of-use rates will need to be used, along with policies that get at the true value of solar energy to an electrical grid.

Following SMUD’s Lead, or Pursuing Something Else?

Some investor-owned utilities such as Tucson Electric Power and Georgia Power are now creating programs to own solar on their customers’ homes (look for an ILSR article on this next week). Sloan doesn’t see that as necessarily a positive sign, but more of a “white flag” that these electric utilities didn’t do enough to create a viable private marketplace for solar power.

As he and SMUD could attest, that solar value is there, even if you have to make a PV Pioneer program or two to make a sustainable marketplace for it to shine.

If you liked the short version, you call also listen to the full 40-minute interview.

This is the 27th edition of Local Energy Rules, an ILSR podcast with Director of Democratic Energy John Farrell that shares powerful stories of successful local renewable energy and exposes the policy and practical barriers to its expansion. Other than his immediate family, the audience is primarily researchers, grassroots organizers, and grasstops policy wonks who want vivid examples of how local renewable energy can power local economies.