St. Louis Park, a Minneapolis suburb of 48 thousand residents, has a clean energy goal rivaling that of its larger neighbor. Will the city’s smaller size help, or hinder, its efforts?

For this episode of our Voices of 100% series of the Local Energy Rules Podcast, host John Farrell speaks with St. Louis Park Council Member Larry Kraft and Sustainability Manager Emily Ziring. St. Louis Park, Minn. is committed to carbon neutrality by 2040. Farrell, Kraft, and Ziring discuss the youth organizing that started it all, taking climate action in a small city, and how innovative ideas will help the city reach its goal.

Emily Ziring is the Sustainability Manager for St. Louis Park. Ziring got into local climate policy because she values policy driven by the people and because local government provides the most opportunity for community participation.

Climate action at a national or global level, or even a state level can seem really daunting or unapproachable. So I really think meeting people where they are and showing them what’s possible is really vital.

Larry Kraft is a St. Louis Park City Council Member, but he has not always been involved in advocacy. After 25 years in the tech industry, Kraft decided to direct his efforts to combating climate change. In 2014, he joined the non-profit iMatter to bring youth into climate advocacy. Kraft ran for city council in 2019 and serves as the “at large A” council member until 2023.

A Commitment Spurred by Youth Activism

In 2015, youth activists in St. Louis Park brought the City Council a report card grading the city’s climate action efforts. The city’s overall score? B minus, says Kraft, including a failing grade for its (nonexistent) climate action plan. The teens proposed that the council create a climate action plan and set a target for net zero emissions. They also wanted a seat at the table.

It’s really a symbiotic relationship that we value.

The St. Louis Park Council responded with 2016’s Community Planning Guide. Not everything in the guide came to be, says Kraft, but it set the foundation for several steps forward. These include youth involvement (two seats on the environment and sustainability commission are reserved for youth), a building energy benchmarking ordinance, and the Solar Sundown pilot. The students’ advocacy ultimately resulted in the city’s Climate Action Plan and a goal of carbon neutrality, city-wide, by the year 2040.

The first step to reaching this ambitious goal, says Kraft, is sourcing one hundred percent renewable electricity. The electrification of other energy use will follow.

Municipal operations are already 100 percent renewable through Xcel Energy’s Windsource credits, says Kraft. St. Louis Park encourages residents to sign up for utility clean energy programs as well, but it does not stop there.

As part of St. Louis Park’s renewable energy commitment, the Council set a goal for 10 percent of electricity consumption to come from local solar. Through Solar Sundown, the city will “share costs for the installation of rooftop solar on qualifying buildings.” Since not every rooftop is suitable for solar, says Ziring, St. Louis Park has mapped out which properties have the most potential.

Minnesota also has a booming community solar program. There are not yet any community solar gardens in St. Louis Park, but Ziring says they hope to install one. The city also works to educate residents of the possibilities for solar, whether that be on their roof or a subscription to community solar.

To reach the longer-term goals in the climate action plan, Kraft says he keeps an ear to the ground. Innovative ideas are emerging across the country and around the globe. One that he mentions is water main geothermal, a technology that can leverage the heat or cool in water mains to heat or cool buildings. Kraft is optimistic that the 20 year timeline is long enough to make big changes, even ones that seem intimidating in the short term.

For some parts of the goal, says Ziring, the city is relying on external groups. In a city the size of St. Louis Park, many things are beyond their scope and are instead addressed that the county, state, or regional level. Still, St. Louis Park advocates for policies at other levels of government that will help the city reach its goals. Ziring also raises the importance of filing comments in the utility regulatory progress.

We can do a lot on our own, but we need help from the state policy to be able to achieve our goals.

A City of “Accommodation”

As Jewish people were pushed out of the Twin Cities in the 50s and 60s, they relocated to St. Louis Park. This migration instilled “a DNA of accommodation and listening” in the community, says Kraft. Now, one of the city’s stated top five priorities is “being a leader in racial equity and inclusion in order to create a more just and inclusive community for all.”

Ziring believes that there is evidence of the city’s commitment to equity within the climate action plan. For example, under various programs, minority owned businesses and low-income residents are given special consideration.

We really don’t want climate action to be something that only wealthy people can afford to do. And we certainly don’t want the economic benefits to be felt only by those who spend the most money.

Advice for Other Small Cities

Ziring’s advice is to read a lot, see what others are doing, and be open to new ideas. She says to even explore things that are outside of the climate action plan.

Although we try to focus most of our resources on policies and programs that provide the most carbon reduction bang for the buck, we really can’t afford to turn away new ideas given this crisis

Kraft (along with Abby Finis of the Great Plains Institute) hosts a podcast exploring equitable solutions to climate change for smaller cities. You can find the podcast, City Climate Corner, on the web or on Apple Podcasts. Kraft recommends that other cities set whatever goal they can, be it long term or short, and go after it.

This is the 26th episode of our special  Voices of

series, and episode 128 of Local Energy Rules, an ILSR podcast with Energy Democracy Director John Farrell, which shares powerful stories of successful local renewable energy and exposes the policy and practical barriers to its expansion. 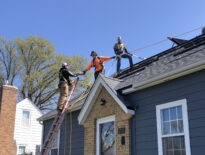 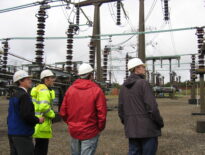