The election of Jesse Ventura set off a flurry of punditry about the meaning of the word “populist”. Governor Ventura certainly fits to a “v” the first part of Webster’s New World Dictionary’s definition of a populist–someone “who claims to represent the interests, views, or tastes of the common people”. The last part of Webster’s definition reads, “particularly as distinct from those of the rich or powerful.” Here we do not yet know Jesse’s mind.

A “virulently anti-government populism” is how conservatives like Bill Gillespie of Reason Magazine and David Brooks of the Weekly Standard describe Governor Ventura’s politics. As evidence, they cite his post-election comment that when his term is over, he’d like people to remember that “when Jesse Ventura was around, ‘I didn’t even notice the government.'”

Does government have a role in populism circa 1999? To answer that question, we would do well to revisit the original populists. I think Jesse would greatly admire those self-reliant and hard working folks. A deeply held belief in personal responsibility, Christian ethics, and mutual aid informed their politics and guided their actions.

For populists the enemy was concentrated power and absentee ownership. To fight that enemy they used two strategies. One was to help themselves by establishing a new kind of institution–the cooperative–a locally owned business enterprise where one member had one vote. The thousands of cooperatives that inhabit rural America today, not only farm coops but electric coops and credit unions, owe their existence, to a large extent, to the populists.

Populists knew that to win their battle they needed not only to act collectively as producers but to act collectively as citizens. They had to create policies that secured their way of life. To accomplish this end they established a political party and successfully ran scores of candidates for state and national office. It was the largest democratic insurgency in American history.

What relevance do 19th century populists have to Minnesotans at the end of the 20th century? A great deal. For concentrated power continues to threaten our communities and impose a heavy cost on our society.

Today in Minnesota, as in most other states and in Washington as well, the political debate revolves around tax and spend issues. What do we do with the surplus? How much do we cut taxes? These are all worthy and important issues, to be sure. But the populists knew that if the citizenry does not restrain the concentrations of economic power, the cost to society would overwhelm any benefit derived from tax cutting.

The same week Governor Ventura announced his intention to reduce the state income tax by about $400 million a year, a new federal study concluded that Northwest Airlines’ near-monopoly on flights out of Minnesota is costing the state’s residents about $400 million a year in higher fares. Jesse’s sales tax rebate plan will send a low income elderly person a check for $200, about the premium he or she will pay for flying out of the Minneapolis airport.

The Minnesota legislature is debating whether to give the state’s hard pressed farmers a one time break on their property taxes. Meanwhile, a tidal wave of economic consolidation is sweeping rural America, undermining farmers’ ability to survive.

Three of every five hogs are slaughtered by the four largest firms. In 1998 hog prices fell 39 percent while retail pork prices stayed the same. The farmer lost $20-50 for each pig raised. The typical hog farmer lost more as a result of concentrated economic power than the even the most pro-farmer advocate in the legislature proposes to give to the farmer from the surplus.

Cargill wants to purchase Continental Grain. If the federal government approves, Cargill alone will control about 45 percent of the global grain trade. It and ADM will handle three-fourths of that trade. Corn farmers, beware.

If the Federal Trade Commission approves all of Monsanto’s pending acquisitions, that company will control an estimated 86 percent of the U.S. cotton seed market and nearly 50 percent of the corn and soybean seed markets. Monsanto doesn’t sell seeds, it rents them and insists that farmers sign a license agreement that, among other things, allows for unannounced on-site inspections. Hope Shand, research director for Rural Advancement Fund International calls this new type of agricultural arrangement “bioserfdom”.

Governments have the authority to stop this dangerous march toward monopoly. If they abdicate that authority, all the tax rebates in the world won’t keep the independent farmer going or the rural economy vibrant and strong. Nineteenth century populists knew that.

From the Desk of David Morris Bill of Rights vs. Concentrated Power 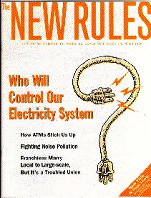