Medicare for All dominated the time, and generated the biggest headlines, in all four Democratic Party debates. Everyone seemed to favor universal high-quality health care. Their often-heated arguments concerned how best to achieve it.

All candidates also favored curbing the corrupting influence of money in politics and the ever-increasing threat of monopoly corporations to our society and democracy.  But that topic did not gain any serious traction — which is unfortunate, for it may well be that enacting virtually any significant version of Medicare for All requires us first to dramatically curb the pernicious influence of individual billionaires and corporate trillionaires.

Inquiring minds may wonder why we need to undertake the long, laborious, and enormously expensive process of ratifying Constitutional Amendments to make our political system truly democratic.  Can’t Congress solve the problem?

The answer is no. As we shall see, over the last 40 years, the Supreme Court has gratuitously awarded corporations Constitutional rights most of us thought were reserved only to citizens. And the Court has declared any restriction on political spending a violation of the First Amendment.

What’s On the Congressional Table?

Fortuitously, on November 20 in Georgia, the candidates will be able to debate two concrete proposals now before Congress.

Rep. Pramila Jayapal (D-WA) introduced one in February. Currently it has 63 co-sponsors.

Before I explore the implications of the different wording, let me address the key question —

How In Hell Did We Get Here?

How could the Supreme Court conclude that corporations are people and money is speech? Common sense and the historical record overwhelmingly support the opposite conclusion. The language of the 14th Amendment seems crystal clear. Equal protection of the laws and the “privileges and immunities” of citizenship are reserved to “All persons born or naturalized in the United States…”

The Constitution doesn’t mention corporations.  That wasn’t an oversight. The American Revolution was, in part, catalyzed by a deep and abiding hatred of monopoly corporations.

Corporations are inhuman, and as Adam Smith argued in The Theory of Moral Sentiments (his first, and by his own reckoning most important work), it is our inherent human qualities of gratitude, sympathy, and empathy that merge our self-interest with the public good in a way that makes societies and economies livable and workable. To Adam Smith, human nature itself was the real invisible hand.

Corporations neither express gratitude nor feel sympathy. They lack a conscience. They are guided not by ethical or moral considerations, but by laws (and their own inclinations) to pursue investor profits above all else. To enable them to achieve this narrow objective, legislatures have bestowed on corporations two remarkable legal gifts: unlimited life and limited liability. And these gifts in turn have enabled them to amass unprecedented power and reach into and over our lives.

How did the Supreme Court end up imbuing corporations with personhood? What arguments did the Justices find compelling? Remarkably, there were none. The Court never debated the issue.  In an 1886 case that had nothing to do with corporate personhood, in a headnote that had no legal standing, a court clerk declared, “The court does not wish to hear argument on the question whether the provision in the Fourteenth Amendment to the Constitution, which forbids a State to deny to any person within its jurisdiction the equal protection of the laws, applies to these corporations. We are all of the opinion that it does.”

The Supreme Court first adopted the bizarre notion that money is speech in 1976 and has expanded on it ever since. In the late 1970s, the Court overturned state laws that prohibited corporations from funding ballot initiatives. In the late 1980s, the United States Supreme Court asserted the right of proponents of ballot measures to pay circulators to collect signatures. The ruling was unanimous. In 2010, Colorado tried to reduce the corruption that inevitably comes from paying petition circulators per signature by banning the practice. The Supreme Court overturned that law too, in part because it would burden free speech since paying per hour would double the cost of paying per signature!

In 2010 the Supreme Court, in its Citizens United decision, again thwarted the will of the people and gave corporations (and unions) a green light to spend unlimited sums on campaigns.

Today billionaires and corporations can spend vast amounts of money to get their favored candidates elected.  In 2004 the top spender in House open seat contests won 84 percent of the time and in the Senate 88 percent of the time.

And, in many states, if a state legislature goes rogue, the rich and powerful can put their policy on the ballot and spend unlimited sums to get it passed. In California, the nation’s largest state, about $4 million will buy a place on the ballot. In 2018 Ballotpedia identified 10 of the state ballot initiatives that attracted the most money and found that in all cases the side that spent the most won.

Indeed, billionaires and corporations more accurately call the money shoveled at candidates and ballot initiatives an “investment” rather than a political contribution.

The Citizen United decision was 5-4, but the election of 2016 guaranteed that for the foreseeable future the Supreme Court will continue to have a majority in support of that provision. So, it appears that we must proceed to a Constitutional Amendment.

Any candidate who takes on corporate personhood and the unlimited political spending by billionaires will have enormous public support. Polls conducted right after the 2010 Citizens United decision found that about 80 percent disapproved of the decision. In May 2018, another poll found three-fourths of respondents — including 66 percent of Republicans and 85 percent of Democrats — supporting a constitutional amendment overturning Citizens United.

A debate would not only educate Americans about the nature and extent of the problem, it would clarify the two approaches to addressing the problem expressed in the Joint Resolutions. One (of Rep. Pramila Jayapal) eliminates personhood for corporations with regard to all Constitutional prerogatives. The latter (of Rep. Ted Deutch) is more narrowly focused and allows for more wiggle room. It allows, but does not require, Congress to treat corporations as nonpersons with respect to campaign spending. It circumscribes but does not eliminate the proposition that money is protected speech.

The next and final debate before the primaries begin will be hosted by MSNBC and the Washington Post on November 20.  Before then, we should demand that the hosts and the moderators put a question or two about Democracy for All on their agenda.

Democracy for All: Amending the U.S. Constitution 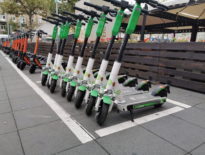 Building Local Power How Cities Are Adapting to the Mobility Revolution…