Utility companies may seem out of reach, and some decisions are made behind closed doors, but everyone has the right to be heard by their electric provider.

For this episode of the Local Energy Rules podcast, host John Farrell speaks with Eric Williams, Vice Chair of the Omaha Public Power District’s Board of Directors. Williams ran for a seat on the utility’s Board of Directors in 2017 out of concern for steep fixed charges. Farrell and Williams discuss the growing momentum for clean energy and how people drive change within public utilities.

People Hold the Power in Nebraska

Nebraska is unique because its three electric utilities (Omaha Public Power District, Nebraska Public Power District, and Lincoln Electric) are all publicly owned. Nebraskans are not only utility customers, they are utility owners. Since they have an ownership stake, they also have some decision-making power through local elections.

After a dozen years as a clean energy advocate, Eric Williams decided to run in one of these elections; there was an open seat on the Omaha Public Power District (OPPD) board. Williams campaigned on fair rates, public engagement, and new energy market opportunities. He won his seat and joined the board of directors in January of 2019.

The primary benefit of public power is direct responsiveness and responsibility to the customer-owners by having a vote… if we’re not delivering on what the people are asking us to do, then it’s time for new leadership.

Unlike investor-owned utilities, public utilities do not provide dividends or returns to shareholders. Instead, says Williams, publicly owned utilities must answer to what customer-owners want. Lately, that has been clean energy.

The utility set an official ‘carbon intensity’ reduction goal in 2018. However, as Williams explains,  a reduction in carbon intensity could still mean an increase in net carbon emissions. For this reason, Williams and other new board members decided to update strategic directive number seven: the company’s directive on environmental stewardship. In 2019, the board voted to change its goal to net zero carbon emissions by 2050. Staff are creating a plan to reach this goal, which Williams expects to be completed at the end of 2021.

Since Omaha Public Power District’s net zero target date is 2050, and the utility plans to add new gas generation in the meantime, OPPD gets a failing grade on the Sierra Club’s “The Dirty Truth About Utility Climate Pledges” report. Report co-author John Romankiewicz is featured on episode 129 of Local Energy Rules.

Williams foresees a future of beneficial electrification: electric vehicles, truck fleets, and home heating. According to the National Renewable Energy Lab, electrifying transportation and building energy use could increase electricity consumption 38% by 2050. Williams hopes that OPPD can meet any additional demand without increasing carbon emissions.

We need to be ready to receive that additional demand and make sure that it both helps them to reduce their carbon by electrifying, but that we also are prepared to deliver that electricity in a clean way.

In keeping up with electrification, OPPD will have to keep up with technology. Smart meters, thermostats, and wifi-connected electric vehicle chargers are all features of a modern, efficient electric grid.

Policy can also support customers in making cleaner choices. If Nebraska’s renewable energy standard passes the unicameral legislature, state policy will be in line with the utility’s position. Williams makes the case for county zoning and permitting laws that allow clean energy development. At the utility level, innovative rate structures can support customers who help with demand response.

In all, Williams emphasizes how the public is responsible for changes at OPPD. As more people came to value and demand clean energy, the utility updated its mission statement and adopted its net zero carbon goal.

Beyond public pressure, Williams says that the “overwhelming economics” of clean energy cannot be ignored. He has found that renewable energy sources are the best option for serving new electricity demand.

This is episode 132 of Local Energy Rules, an ILSR podcast with Energy Democracy Director John Farrell, which shares powerful stories of successful local renewable energy and exposes the policy and practical barriers to its expansion. 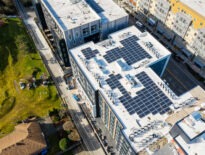