On February 19, the Maryland House Committee on Transportation and the Environment heard testimony for House Bill 589, “Solid Waste Management – Organics Recycling and Waste Diversion – Food Residuals.” The bill requires large food waste generators to reduce, rescue, and/or recycle their food waste if there is nearby capacity to accept this material. The Institute for Local Self-Reliance has spearheaded this legislation alongside Delegate Lorig Charkoudian (District 20).

HB 589 gives food waste generators flexibility to decide how to divert their food waste from landfills and incinerators. The law only applies if an organics recycling capacity exists within a 30-mile radius that is willing and able to take their material. The bill does not require generators to send to that facility, but only to avoid disposal if capacity exists. The idea behind the bill is to spur not only needed infrastructure but close-in facilities. If passed, this new policy would go into effect in January 2021, first targeting those generating 2 tons or more of food waste each week (a typical grocery store). Additional food waste generators would be required to divert in succeeding years. Similar legislation has passed in a number of states, including California, Connecticut, Rhode Island, Massachusetts, and Vermont.

For many years, ILSR has advanced composting in the state because of its myriad benefits. Compost adds needed organic matter to soil, sequesters carbon in soil, improves plant growth, conserves water, reduces reliance on chemical pesticides and fertilizers, and helps prevent nutrient run-off and soil erosion. Healthy soils are considered vital to stem climate impacts. Composting also creates four times as many jobs on a per-ton basis as landfilling and trash incineration. Composting can effectively take place in a wide range of sizes including small-scale onsite systems (such as at urban farms, schools, universities, and correctional facilities), farm-scale systems, county and municipal sites, and large-scale industrial sites.

Yet, despite these benefits, most food waste generated in Maryland is disposed in landfills or burned. Of the estimated 839,505 tons of food residuals generated per year by Maryland residents and businesses, only 15% was recovered. An estimated whopping 736,500 tons of food residuals are generated by large food scrap generators (LFSGs) producing 1 or more tons per week. The Johns Hopkins Center for a Livable Future (CLF) identified approximately 3,961 LFSGs located across Maryland. They include supermarkets, hotels, universities, food processing facilities, and food distribution warehouses.

These entities could recycle more if more facilities existed and such facilities were within a reasonable distance. The combined composting capacity for food residuals/manure of existing and planned facilities is only 97,120 tons per year, far below what is needed to accommodate the food waste generated.

This bill does not require any food waste generator to source separate and recycle if there’s no place to take material within 30 miles. It does provide flexibility on how material can be managed. You can prevent waste, you can donate food to feed people, you can compost on-site, you can send your material to a farmer, or a combination of all of these.

This bill is specifically designed to stimulate investment in in-state capacity.

ILSR organized the panel of experts to testify at the committee hearing at Del. Charkoudian’s request. Video of in-person testimony is available from the Maryland House of Delegates. In-person testimonials came from:

Watch the full recording of the testimony here. 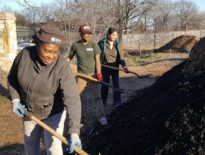 Composting The Case for Government Support of Community Compo… 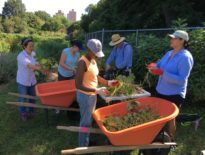