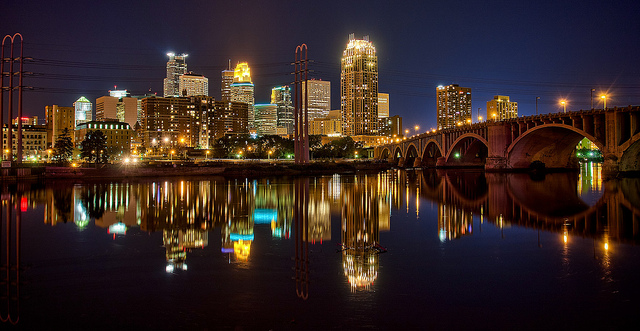 In the past month, the city of Minneapolis and its two investor-owned utilities adopted the nation’s first clean energy partnership, with a wide range of goals including meeting the city’s ambitious greenhouse gas emission reduction goals. How did it happen and what can it accomplish? The following 8-minute video from one of the “lead rabble rousers” on the Minneapolis Energy Options campaign, John Farrell, explains what got things started and where the partnership may lead.

One of the primary motivators of the Minneapolis Energy Options campaign was to say, “How much money do we spend collectively as a city on these energy services, and how much of that is actually leaving the city of Minneapolis.” The answer is $450 million each year, for electricity and gas services, with most of the profits leaving town. “A lot of it is money that can be recaptured within the local economy, especially…when you’re talking about a transformation taking place in the technology in the electricity sector allowing you to generate energy much closer to home than we ever have before.”

Organizers of the Minneapolis Energy Options campaign started around a conference table asking how this notion of the local energy dollar could be addressed, and immediately thought of the municipalization fight in Boulder, CO. But “it seemed sort of silly to be saying, “let’s go out and form our own utility” [when] we haven’t even really talked to the ones that we’ve got about what we could do with working with them.” On the other hand, the city needed leverage in its negotiations with utilities since most of the power in utility regulation is at the state and federal level. So the campaign was meant to elevate the notion of the city’s energy options, up to and including the formation of a city-owned utility.

The result of the campaign was that the utilities came to the table to negotiate.

As of October 2014, “we have a first-in-the-nation partnership between a city and its utilities to explore not only the two-thirds of climate emissions that are the result of electricity and gas consumption that the city really didn’t have any opportunity to influence before. But also that 450 million dollars that’s being spent in the local economy and how that can be kept more local.”

As one testifier at city council said, ‘Our job now is to figure out how this doesn’t become the quarterly coffee clatch for the city folks and the utilities, and how do we make sure we actually have real substantive conversations about it.'”

“What are the possibilities?”

“There are three key things at stake. The first one is, what ideas can we generate that are innovative and ambitious and measurable and achievable within a short time frame? Because we’ve established for ourselves that this partnership can go on as long as ten years. We’ve got a check-in point of about five years. Which means we really have to start having stuff happen within two to three years if we want to know whether or not this is working.” All of the parties – Minneapolis Energy Options (Community Power), the city, and the utilities are going to come with great ideas.  “What can this city put on the table with its regulatory authority over local property? What can utilities bring to bear with the data that they have about our local grid and the knowledge that they have about installing local solar?”

“Number two is, can we…set ourselves real benchmarks for accomplishing these things? Can we say two years from now that we are going to make meaningful and substantial progress on energy efficiency by retro-fitting a certain number of homes? Can we do it in a way that focuses on communities that have been traditionally disadvantaged, where folks pay a disproportionate share of their monthly income on energy?  What can we accomplish with community solar over the next couple of years in Minneapolis? What are going to be the opportunities to get synergies between energy savings programs for electricity and gas?

Number three is, “how do we then let this be part of the bigger national conversation about how do we structure a utility business model (see forthcoming ILSR report, to be released 12/2/14) that serves the principles and goals not only of the city of Minneapolis, but – writ-large – all of the utility customers who care about things like clean energy?”