Minnesota’s largest investor-owned utility, Xcel Energy, last month reported sparse participation in a program designed to deliver value to customers who charge their electric vehicles when it’s most convenient for the grid. But despite its benefits for the grid and cost savings for customers, the initiative appears stuck in neutral.

By April 2017, a year and a half after its launch, just 95 Xcel customers had opted in to the state-mandated electric vehicle charging tariff. With nearly 1,000 plug-in vehicles registered to Minnesota drivers — a bulk of them likely in Xcel’s metro-area territory — participation numbers hover well below reasonable expectations. Why?

A review of Xcel’s most recent report on the program, filed with regulators on June 1, offers a few hints.

First, the utility’s outreach to date hasn’t followed a proven blueprint established by other utilities more proactive about electric vehicle ownership. Where Xcel has spent more than $100,000 to table at farmers markets and meet with local employers, it hasn’t built relationships with car dealers to educate electric vehicle buyers about charging options. Austin Energy, in Texas, has proven the potential of partnerships with dealerships, offering a month’s free charging to new electric car owners as a tool to let them know about charging plans.

But even with bolder outreach, questions loom about the viability of Xcel’s charging program for customers unable or unwilling to shoulder high upfront costs. The utility requires separate metering and charging infrastructure that costs roughly $1,500 — a burden that likely deters participation when the average payback for participation is just $14 per month. (That means it would take more than nine years to recoup the initial investment, more than the six-year average duration of car ownership.) In contrast, the charging program at nearby Dakota Electric has a lower upfront cost that pays back in just 2-4 years of typical charging.

Disappointing participation numbers for Xcel’s program underscore the need for a more holistic approach to encouraging drivers to charge when electricity is least expensive. Without the right charging policies in place, Xcel misses an opportunity to strengthen demand response, improve grid performance, and get itself ready for an increasingly electrified transportation system. 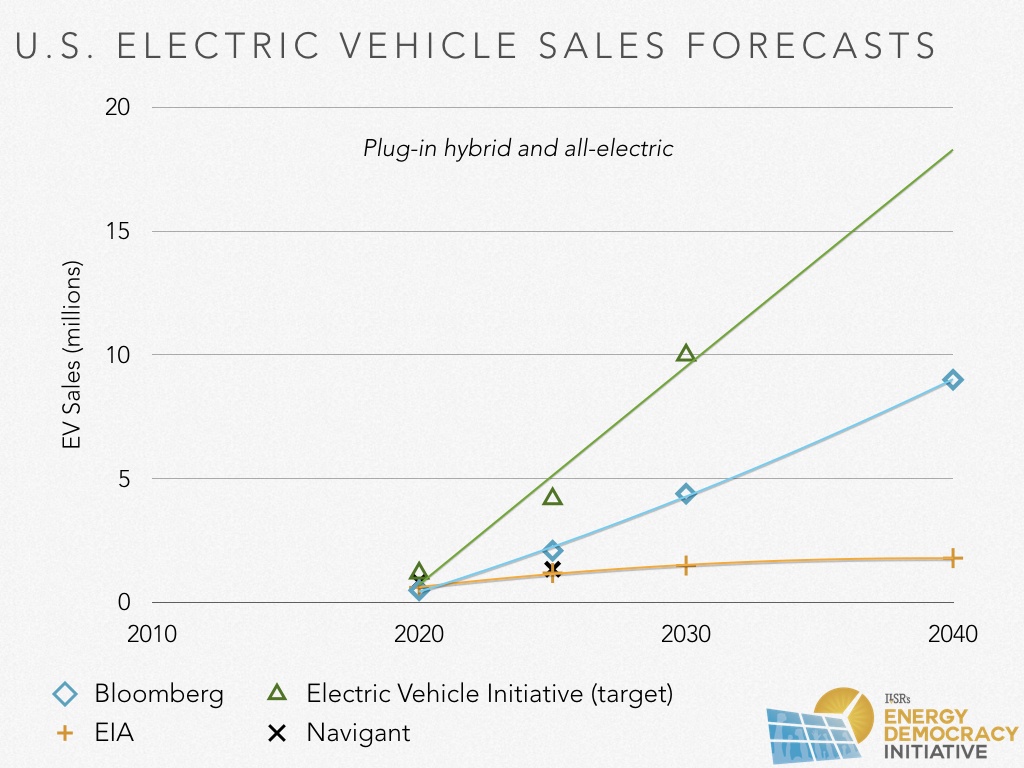 As battery costs continue to plummet, electric vehicle ownership will become more common. Plug-in models save drivers thousands of dollars in fuel and maintenance costs, and can help utilities compensate for sluggish electricity sales in recent years. (For more on the benefits of electric vehicles, check out our recent report here.)

But unless Xcel is willing to implement a more intentional, customer-friendly charging program — as pioneered by other utilities nationwide — it will leave this substantial opportunity on the table.

This month, after the Minnesota Public Utilities Commission requested comments on utilities’ electric vehicle charging tariffs, ILSR submitted the following comments. Our feedback is included below, lightly edited for clarity.

We are discouraged by the low number of electric vehicle drivers opting in to Xcel’s tariff. As of April 2017, just 95 electric vehicle owners had signed up for the specialized program. It is likely that far more drivers are eligible to participate; in November 2016, the Star Tribune newspaper, citing the Great Plains Institute, reported 967 plug-in vehicles were registered in Minnesota.

While the exact number of registered electric vehicles in Xcel’s territory is not publicly available, it is safe to assume — given substantially greater penetration in metropolitan areas with shorter driving distances — that a large portion of the state’s electric vehicles belong to households served by Xcel. Even if only half of these vehicles fell within Xcel territory, fewer than 20% of eligible customers have signed on to the tariff. That’s particularly dismaying because the tariff’s purpose is to align customer and utility interests in shifting charging to low-cost, off-peak periods. With over 90% of charging by tariff users happening in off-peak periods, it clearly works for those willing to swallow the upfront costs (more on this in the following section). Given the Commission’s interest in demand response expressed in Xcel’s latest Integrated Resource Plan, it seems the under-utilization of the electric vehicle tariff ought to be a more significant concern.

In its report, Xcel lists a series of outreach efforts, including tabling at farmers markets and speaking engagements at local businesses. The relatively low participation rate to date reinforces the need for a more targeted approach to reaching customers and educating them about charging options for electric vehicle drivers. For example, Austin Energy works with car dealers to provide discount charging cards to electric vehicle buyers, providing them a concrete benefit and a reason to learn more about charging options.

When an ILSR staff member recently purchased a Nissan LEAF from a Twin Cities-area dealer, no information was provided about off-peak charging options. This is a serious oversight. Most electric vehicles operating in any utility service territory are probably purchased locally, meaning the utility can easily target potential tariff users at the point of sale, and likely at a lower cost than $1,500 per participant (as indicated in Xcel’s June 1 report).

Based on the monthly tariff data included in Table 1 of Xcel’s June 1 report (e.g., number of customers, and kilowatt-hours charged at on-peak and off-peak rates) and the utility’s rates — standard, electric vehicle on-peak, and electric vehicle off-peak — the average driver would have to wait more than nine years to recoup upfront costs associated with the tariff.

To participate in Xcel’s electric vehicle charging program, customers must purchase and install a secondary circuit and meter socket — at an estimated price of $1,500. Using the figures in Table 1 to determine savings generated through the tariff, the average driver sees just a $14 reduction in their monthly bill (with a median reduction of $13).

Assuming a $1,500 upfront buy-in to cover required charging and metering infrastructure, the average driver would have to wait 9.24 years before they captured enough financial benefit to offset their initial investment. That’s significantly longer than the average car ownership span of six years.

Though Dakota Electric requires customers to install a submetered circuit at an upfront cost around $1,000, it provides a $500 rebate. Even assuming an unlikely scenario in which all peak charging happens in the utility’s $0.44-per-kilowatt-hour “super peak” period between 4 p.m. and 9 p.m., customers can recoup their $500 net cost in less than four years. If customers avoid the super peak period entirely, the payback window shrinks to roughly two years.

Xcel Energy could remedy both its low participation and poorly targeted marketing and the weak value for customers by offering a similar rebate program and promoting it through car dealers that sell electric vehicles.

While we believe too few electric vehicle owners are enlisted in Xcel’s tariff, we are encouraged by steadily increasing participation between its October 2015 implementation and April 2017, as shown in Table 1. In fact, it follows roughly the same trajectory as national electric vehicle sales numbers. 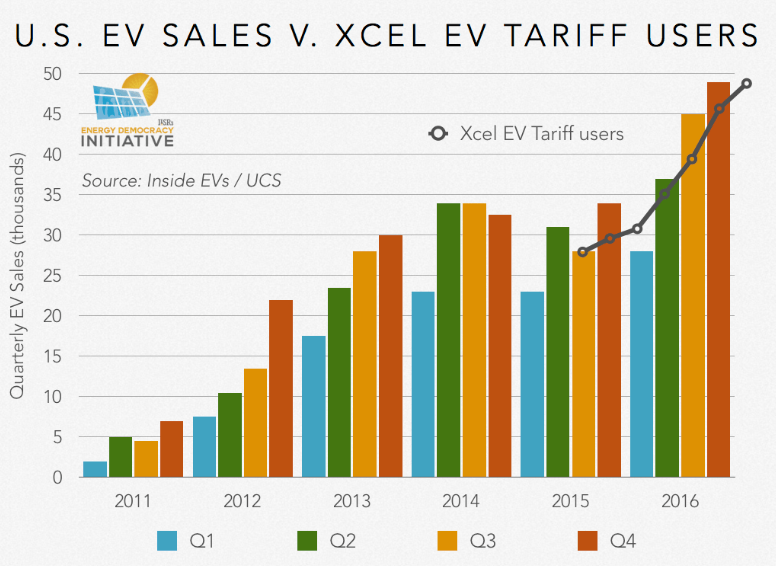 Still, we remain concerned that Xcel in its report projected enrollment in the electric vehicle rate would continue “at a moderate pace.” This underestimates market dynamics already beginning to reshape the U.S. auto industry. In fact, projections widely forecast a steep uptick in electric vehicle penetration, propelled in large part by a freefall in battery costs that will continue to meaningfully drive down the price of electric vehicle ownership.

Indeed, the battery packs used in electric vehicles are expected to cost just one-quarter of their 2010 price by 2022, a trend that by itself reduces the price of these vehicles by about 25%. With battery prices in a freefall, electric vehicle ownership will be more viable for more people. This means utilities need to be proactive and forward-thinking in forecasting electric vehicle adoption and implementing rates that promote benefits for customers (e.g., cost savings) and the grid (e.g., peak shifting).

Finally, we are concerned about discrepancies in data presented in Table 1. The monthly usage across all tariff participants sharply dropped in June 2016 and October 2016, in each case roughly halving the previous month’s totals though the number of participating customers increased month over month (from 31 to 32 in June and from 46 to 56 in October). The discrepancies are large enough that they cannot be explained by a single vehicle owner’s anomalous habits.

We would appreciate a deeper analysis of both these disparities in monthly usage as well as a more thorough explanation of how Xcel is gathering program data on an ongoing basis. Clearly it is important to the integrity of the tariff (and its oversight) that the enrollment and usage data is transparent, up to date, and accurate. 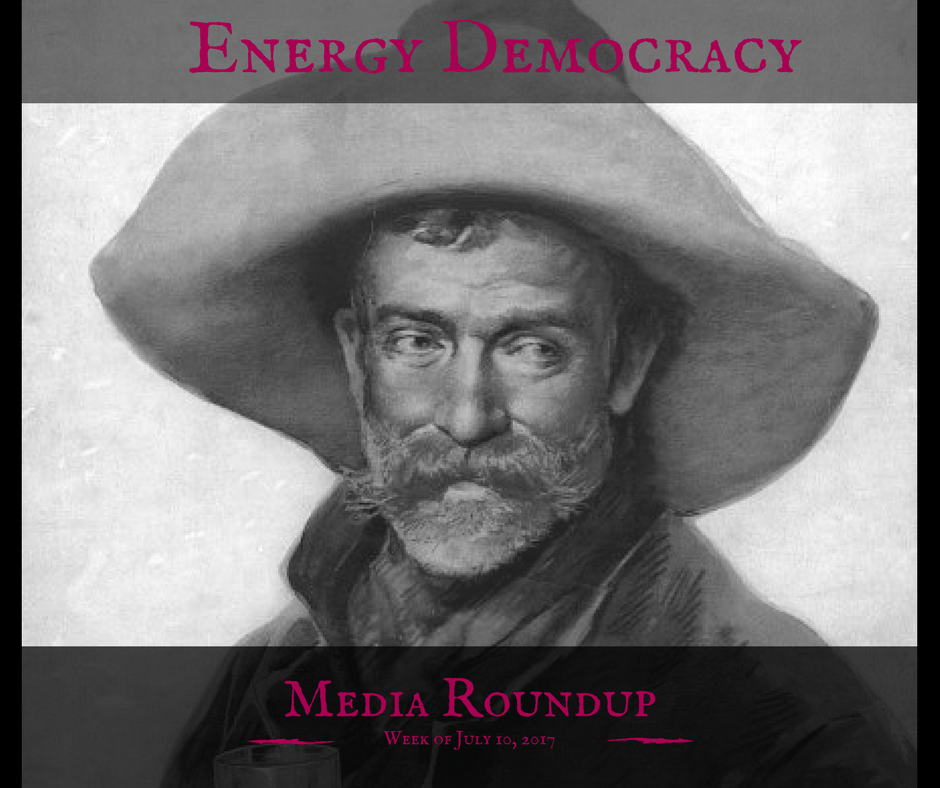 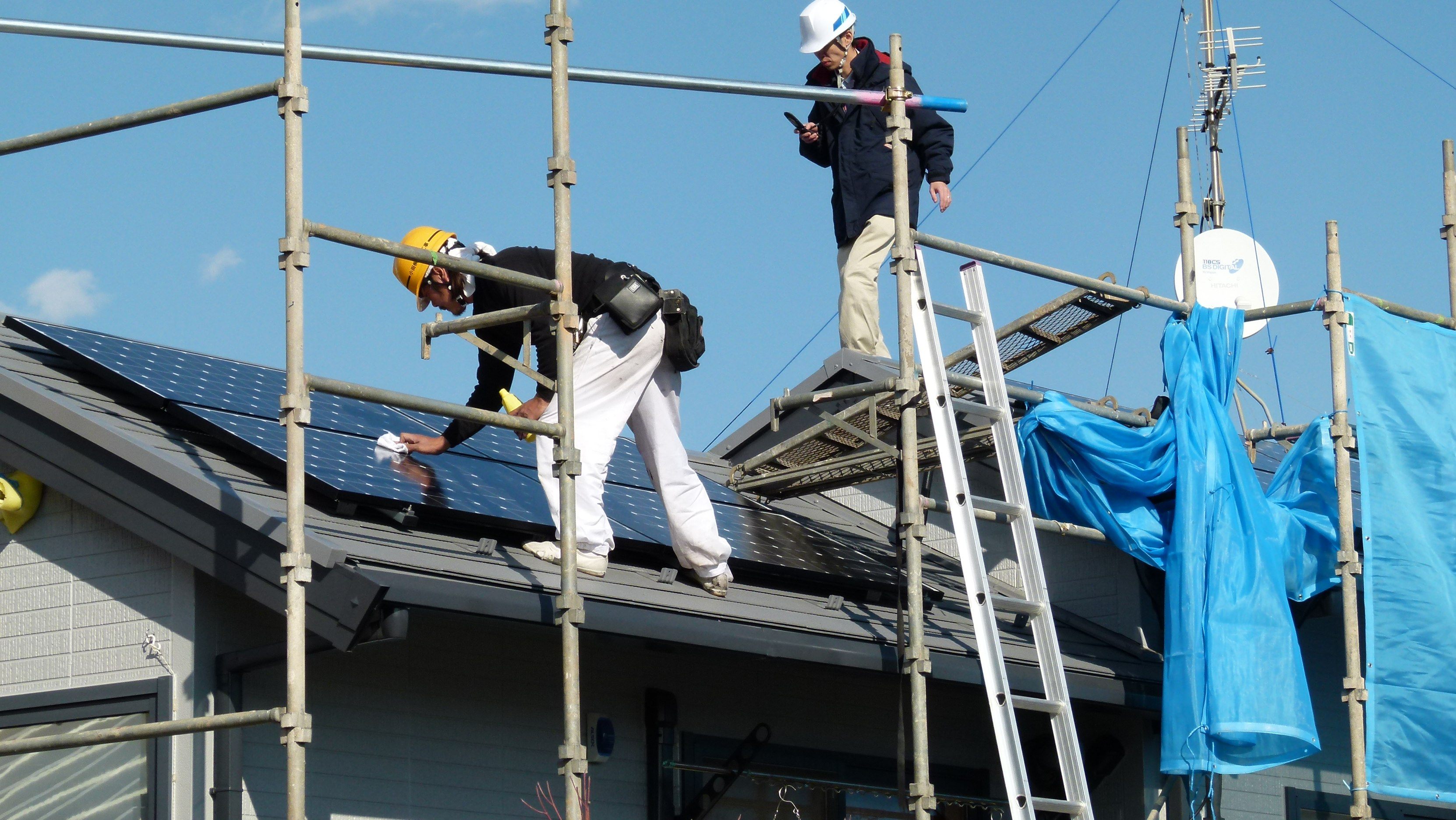