MINNEAPOLIS, MINN. (May 9, 2022) – The Biden Administration is poised to celebrate the nation’s largest telecommunications monopolies today even as these companies do the bare minimum for digital equity while undermining his administration’s broadband agenda.

Christopher Mitchell, Director of the Community Broadband Networks Program at the Institute for Local Self-Reliance, had this to say about the undue influence of Big Telecom and its effort to block the confirmation of Gigi Sohn as an FCC commissioner:

“As we enter the third year of a pandemic that has supposedly redefined the crucial importance of broadband, the Federal Communications Commission has failed to update the definition of broadband it set in 2015. Few expect the FCC to publish accurate maps of where broadband is until 2023. It might help if President Biden seated his third commissioner.”

“The Biden Administration took a painfully long time to nominate the most obvious candidate for the position – Gigi Sohn – and has done precious little to have her confirmed in a reasonable time frame. Though it would be easy to blame Republican opposition, the truth is that it simply does not appear to be a priority for the Administration.”

“We join the effort to praise all companies that are helping move toward digital equity, but if simply discounting the cost of service from cable and telephone providers were sufficient, we might have less of a problem now, 11 years after Comcast launched Internet Essentials. To actually connect everyone, we will need an effective FCC as well as local engagement. However, some of the very companies being praised by the President today are spending millions in lobbying and ad-blitzes to prevent Gigi Sohn from being confirmed and to stop needed investments.”

“If they succeed in blocking Gigi, they will have confirmed something else: that they are the actual regulator of telecom services and the Biden Administration is not serious about the lofty goals it set in 2021.”

“We support the work of countless people within the executive branch who are making the rules to spend the various funds appropriated by Congress to expand broadband access. While the low-cost plans and the ACP being touted today will help millions of Americans, it cannot come at the cost of defanging the FCC.”

Christopher is one of the foremost experts in the country on all things broadband and can speak with a rare depth and breadth of knowledge on trends and developments on Internet policy. He has led the Community Broadband Networks Program at the Institute for Local Self-Reliance for 15 years and built MuniNetworks.org to serve as a clearinghouse of information about local broadband solutions and partnerships. He has hosted more than 500 shows of the Community Broadband Bits podcast and more than one year of Connect This! YouTube livestream. Christopher has received numerous awards for his work on Internet policy and has been on Marketplace, 1A, the Takeaway, and many more national shows.

About the Institute for Local Self Reliance: 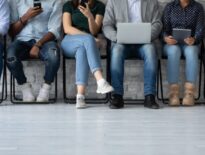