In 2011, the neighborhoods of Highland Park, Mich. went dark. The utility company had repossessed streetlights to collect on the city’s debt. Unwilling to stand idly by, the people of Highland Park organized to light the streets themselves using off-grid, renewable energy.

In this episode of Local Energy Rules, host John Farrell speaks with Maria Thomas, Outreach and Organizing Coordinator for Soulardarity. The two discussed energy democracy, and Soulardarity’s work in Highland Park, live in Milwaukee at the RE-AMP annual meeting. Highland Park, home to the first Ford Model-T assembly line, is suffering from economic downturn. As industry departed, the Detroit suburb shrank – along with its tax base. This left the city indebted to the monopoly utility company, DTE energy. To collect on this debt, without any notice, the utility pulled more than a thousand streetlights from residential areas.

Listen to the episode to hear how the community fought back against monopoly power, and see the episode notes and transcript below for more.

After DTE took the streetlights, Maria Thomas describes the difficulty of seeing one’s own hands in the darkness. The repossession, which Thomas jokingly calls “benevolent,” left Highland Parkers more vulnerable when outside at night or walking to the bus stop at dawn.

To respond, a local initiative grew with an idea to replace the streetlights. Thomas notes that in order to prevent a second repossession of the lamps, they had to be independent of DTE’s grid. One way to do this was by installing street lights that generate their own electricity through solar.

Through community crowdfunding, Highland Park was able to install its first off-grid, solar streetlight in 2012 – near the old Ford factory. To capture this momentum and install even more streetlights, the group Soulardarity was formed. Thanks to both local fundraising and a partnership with the 100% Project, Soulardarity has installed a total of seven solar lights in Highland Park.

Realizing the cost-saving potential of buying the lights in bulk, Soulardarity began to think bigger. In a proposal to the Highland Park council, entitled “Let There Be Light,” Soulardarity outlined the benefits of ditching DTE and drawing the city out of the dark with solar. By replacing all of the grid-tied streetlights with their solar superiors, Soulardarity found that the city could save three million dollars over 15 years. 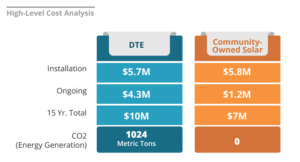 If the cost-savings weren’t enough, community-owned streetlights bring many other benefits. Thomas emphasizes their role in reducing carbon emissions and creating jobs, both of which facilitate greater peace and stability in the community. Having local control over streetlights in Highland Park would build up energy democracy, an energy system where everyone has a say. As Thomas says in the interview:

There is a slogan that DTE uses, that they want us to know our energy. We feel that we have the right to own our energy.

Energy democracy is key to the mission of Soulidarity: they want stakeholders to have a place at the table. Thomas says that “we should all be able to take advantage of [renewable energy], no matter what our economic status, ethnicity, religion, whatever, we’re all human beings.” Energy democracy is part of energy justice, an important framework in Highland Park. As a predominantly black and African-American city, redevelopment without democracy could mean gentrification and the displacement of a community with deep ties to the area.

Soulidarity wants to engage those most affected by energy decisions, Thomas explains. “There are not enough people of color in the movement.” There needs to be more people “who have been impacted by the oppression and the oppressive nature of energy providers or other polluters, that are directly suffering because of various components of the corporate conglomerate.”

Soulidarity does this work through outreach and education. Thomas describes her work teaching children about sustainable energy, which she hopes will soon be a part of the public school system. She also engages in outreach to adults to grow the movement, but sees this as another challenge.

As an energy democracy… we want our members to tell us ‘do you want this?’ number one, and ‘how do you envision it?’ number two. But that’s not as big a challenge as just getting folks to come to the table.

Thomas describes how DTE Energy found a loophole to install grid-tied streetlights again. By giving the mayor a voucher, the utility is encouraging the city to reinvest in the expensive infrastructure that was just taken away. Now, DTE has begun to put utility-owned streetlights back in, without notifying Highland Park residents. Thomas decries this activity as yet another crooked tactic.

If the utilities don’t want to be good neighbors, if they don’t want to be concerned about people, if they want to think of people as beings to be counted by an accountant, then we need to walk away because the business model is very archaic.

For more on the shady practices of monopoly utilities, listen to this Building Local Power podcast entitled “Energy Monopolies: The Dark Side of the Electricity Business”

Not Confined to Highland Park

There’s no need for financial troubles to push the switch to solar lighting. In fact, many cities and communities are beginning to evaluate the benefits of solar. The city of Beaumont, Calif. passed an ordinance in 2015 that all new street and park lights must be solar. More recently, a company is testing out four streetlights in Las Vegas that are powered both by solar and by kinetic energy captured from pedestrians.

Where communities already own their public lighting, many are turning to LED bulbs. Los Angeles has replaced its conventional streetlights with LED versions, which significantly reduce energy use and can charge electric vehicles.

Switching to smarter technology is not just happening in eco-friendly California. The cost-effective switch to LED streetlights has been happening quietly all over the country, in cities large and small. According to a report led by The Climate Group, “converting all US street lighting to energy efficient LED lamps would save US$2.3 billion and prevent approximately 15 million tons of CO2 from entering the atmosphere. This is equivalent to taking more than 3 million cars off the street.”

Although Thomas seemed disappointed in the re-installation of grid-tied streetlights, she looks ahead to alternate plans of action. She mentions that it is election year in Highland Park; she hopes to organize support around candidates who will act in the people’s interest.

Another project of Soulardarity is the “PowerUp Program,” which has facilitated the installation of over 100 solar lights by arranging group purchasing.

Soulardarity is also planning outreach on many types of renewables, not just solar. Thomas voices a desire for 100% clean energy and describes her ideal version of a thriving Highland Park. To get there, they need resources, community engagement, and plenty of hard work.

I’m a person of faith, so as the word says, the harvest is great, but the workers are few. So consequently, we have a lot of work to do.

Thomas also looks forward to an Energy Democracy convening Soulidarity is hosting at the end of July. Through the conference, the group hopes to harness “the urgency of now,” find common ground, and take actual steps toward a more democratic energy system.

For more on the Soulardarity story, check out this video produced by the organization. Also, listen to this podcast by Cool Solutions featuring Jackson Koeppel, Executive Director of Soulardarity.

This is the 81st episode of Local Energy Rules, an ILSR podcast with Energy Democracy Director John Farrell, which shares powerful stories of successful local renewable energy and exposes the policy and practical barriers to its expansion.

Lights Out? Not for This Michigan City – Episode 81 of Local Energy Rules Podcast 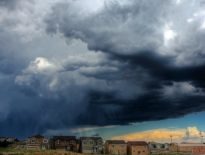 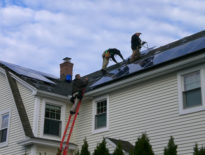