Minneapolis, Minn.— (June 17, 2008). Yesterday, the Minnesota Department of Commerce released the findings of the first of two major powerline studies ordered by the Minnesota Legislature. The study’s conclusions affirm those of a previous utility study that found that significant amounts of wind energy can be injected into the existing transmission system at costs far lower than building new transmission lines to more distant wind farms.

“Local, community-based wind projects lower costs to the ratepayers, keep our energy dollars inside Minnesota and move us toward meeting the state’s renewable electricity standard,” said George Crocker, one of the prime movers behind the previous study and a key participant in the drafting of the state legislation requiring this study.

“The study found that 600 MW of dispersed, community-based wind projects could be integrated across Minnesota into the existing grid system with no additional costs for transmission,” notes John Bailey of the Institute for Local Self-Reliance, a long time proponent of decentralized power generation. For comparison, the proposed 600 MW Big Stone II coal fired power plant would need to spend about $250 million for new transmission infrastructure, just in Minnesota.

“This study points clearly towards a major shift in electric utility management,” said George Crocker, Executive Director of the North American Water Office (NAWO), a non-profit organization that has worked on energy issues for more than 25 years. “The old way of doing business was to hook up a few very large central station power plants, mostly coal and nuclear, to high voltage powerlines to serve energy consumers in distant cities. The new way, as this study documents, is to serve those same energy consumers by strategically locating smaller locally owned dispersed renewable energy facilities.”

This new study complements a similar 2005 study in west central MN that indicated as much as 1,400 MW of dispersed wind energy could be injected into the existing grid just in the west central region with minimal upgrades. “This dispersed generation siting strategy has the potential to allow numerous new renewable generation projects to interconnect to the grid and not be constrained by transmission bottlenecks such as those now existing on Buffalo Ridge,” said Mike Michaud, one of the engineers participating in the new study. Interestingly, the study showed that even in a transmission constrained area like SW Minnesota, there is still room for substantial amounts of dispersed, community owned projects to be developed today.

“No longer can old, conventional central-station electric utility thinking claim to provide the cheapest, most reliable electric utility services. In the new paradigm,” concluded Mr. Crocker, “utility services will be delivered increasingly by cleaner, cheaper, more reliable, more secure and more equitable renewable energy projects, owned by ordinary people in communities around the state, with the energy delivered through smart grids, rather than dumb powerlines.”

The new study is available on the web site of the MN Dept. of Commerce at www.commerce.state.mn.us

About ILSR and the New Rules Project: The Institute for Local Self-Reliance is a nonprofit organization founded in 1974 to advance sustainable, equitable, and community-centered economic development through research and educational activities and technical assistance. In 1998, ILSR established the New Rules Project to foster greater civic participation and an increased emphasis on the importance of our local economies. More at http://www.ilsr.org and http://www.newrules.org/ 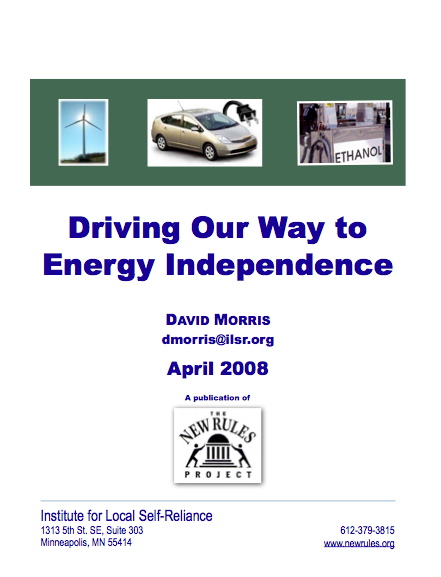