Last week, Wal-Mart announced that it would create 22,000 new jobs in the U.S. to staff new and expanded stores.  More than 100 newspapers and magazines reported this news as a welcome bright spot amid the downturn.  But had these news outlets turned to sources beyond Wal-Mart’s press release and attempted to provide at least some analysis of the broader impact, the headlines might not have been so rosy.

In all likelihood, Wal-Mart’s expansion will make the U.S. employment picture worse, not better.  There’s plenty of evidence to suggest that the addition of 22,000 jobs at Wal-Mart will lead to the loss of at least as many, and probably more, jobs at other businesses.

According a national study led by Dr. David Neumark, an economist at the University of California at Irvine, for each new retail job created by Wal-Mart, 1.4 existing jobs have been lost at competing businesses.  That means every new Wal-Mart store that opens reduces retail employment by about 150 jobs.

How can this be?  The answer is that Wal-Mart relies on fewer employees to accomplish the same volume of sales as the businesses it competes with.  As Wal-Mart grows, and competing businesses downsize and close, the resulting layoffs outnumber the job gains.

Indeed, over the last decade, even as Wal-Mart and other big-box stores multiplied dramatically and retail spending overall grew, retail employment in the U.S. remained flat.  Today, retail workers receive a smaller share of the nation’s total payroll than they did a decade ago.

Retail jobs are not the only jobs at stake, either.  Wal-Mart has played a leading role in pushing millions of manufacturing jobs to low-wage countries, and, unlike independent retailers, which purchase many goods and services, like printing and accounting, locally, Wal-Mart stores provide very little support to other businesses in the community.  Studies have found that only $14 of every $100 spent at a Wal-Mart store stays in the local economy.

Wal-Mart to Create 22,000 Jobs — and Destroy Many Thousands More 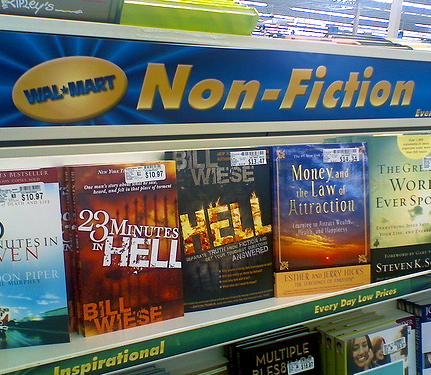 Retail Death of the Category Killers