Borders Books is on “death watch,” according to one industry observer.  Virgin shut down its last U.S. record store this month. Office Depot and Staples are struggling.  Circuit City is gone.  Best Buy has launched a desperate ad campaign.

The specialty chains that grew so aggressively in the 1990s and early 2000s — the so-called “category killers” that bankrupted thousands of independent businesses — are now themselves rapidly losing ground to a handful of giant mass merchandisers, namely Wal-Mart, Amazon, Target, and Costco.

While the decline of independent businesses has leveled off and many are finding ways to survive and even thrive by building local business alliances and emphasizing their community roots, the rest of the retail sector is undergoing dramatic consolidation as a small number of massive companies become ever more dominant. This is an ominous trend for manufacturers and consumers, and it exposes serious flaws in U.S. antitrust policy.

“For much of 2008, the industry focused its attention on the viability of the struggling Borders, but Barnes & Noble faces many of the very same issues,” wrote Peter Olson, the former CEO of Random House, earlier this year in Publishers Weekly.  Olson predicts that the two chains will continue to lose ground, struggle to finance their inventories, and be forced to close outlets.

Big-box mass merchandisers, like Wal-Mart, Target, and Costco, have taken over 30 percent of the book market.  These chains are now selling as many books as Barnes & Noble and Borders.

Mass merchandisers, especially Wal-Mart, can turn a book into a best-seller just by adding it to their shelves — a power that publishers have found irresistible.  Many now devote considerable resources to supporting the big boxes.

But Michael Norris, senior analyst at Simba Information and editor of the Book Publishing Report, believes publishers are making a deal with the devil.  “Publishers don’t realize it, but they are backing themselves into a corner if more bookstores continue to close,” he contends.  “If the balance of power shifts to a couple of big retailers … publishers are going to find they have no relevance or power.”

The big boxes stock only a small number of titles.  They treat books as loss leaders (i.e., they sell them below cost) to draw people into their stores.  This undercuts bookstores and sharply narrows the range of books produced and sold.  While a customer picking up Oprah’s latest pick at a bookstore will have an opportunity to browse publishers’ back-lists and check out books by new writers, at Wal-Mart or Costco, shoppers see only a small number of titles.  Rather than another book, their impulse purchases are far more likely to be socks or steaks.

So, while the big boxes can sell truckloads of a particular book, their growing dominance in the industry is actually shrinking the overall book market. “These are not encouraging developments for an industry that has had an admirable track record to date in discovering new talent and fostering a diversity of expression,” notes Olson.

What’s more, mass merchandisers are the least profitable retail channel for publishers, because they systematically over-buy and often end up returning over 40 percent of their inventory.  (That compares to a return-rate of about 10% at independent bookstores.)

The other company taking market share from chain bookstores is, of course, Amazon, which now captures about 15 percent of book sales.  No one knows exactly what Amazon is up to these days, but its recent acquisitions and the fact that it lists publishers as competitors in its SEC filings is making many nervous. Boris Kachka, who covers the book industry for New York Magazine, explains, “Editors and retailers alike fear that it’s bent on building a vertical publishing business — from acquisition to your doorstep — with not a single middleman in sight.  No HarperCollins, no Borders, no printing press.”

Similar dynamics are playing out in category after category as mass merchandisers undercut specialty chains to become the dominant sellers, gaining unprecedented power over manufacturers and the ability to refashion entire product categories to suit their own needs, not those of producers or customers.

In 2003, Wal-Mart set its sights on the toy market.  It sold toys at a loss for an entire holiday season, sending Toys R Us, KB Toys, and FAO Schwartz into a tail spin.  Wal-Mart emerged as the nation’s top toy seller, capturing more than 25 percent of the market.  The needs and interests of Wal-Mart’s buyers soon became the primary consideration in the design and production of toys.

Last month, as part of a nationwide remodeling project, Wal-Mart began cutting the shelf space devoted to toys in its supercenters by half.  The loss of some 400 feet of aisles could crush a number of manufacturers that depend on Wal-Mart for a sizable share of their business and now have fewer competing retailers to turn to.

Much the same has happened with music.  Although the decline of record stores is often blamed entirely on online downloading, even in 2009 CDs still account for more than 75 percent of album sales.  The downfall of record stores really began with big-box retailers.

Starting in the 1990s, Wal-Mart, Target, and Best Buy sold popular CDs below cost in order to bring people into their stores and sell more refrigerators and toasters.  It was a strategy that many specialty music stores, chain and independent, were unable to counter, despite their vastly larger selections.

Mass merchandisers soon grew from minor players in the music business to major gatekeepers, controlling more than two-thirds of the market, dictating terms to record companies, and blacklisting albums they found objectionable.

Today, the big music chains, Tower Records and Virgin Megastores, are gone and so too are thousands of independent record stores.  Meanwhile, big-box retailers — who calculate their interest in music the same way they do toothpaste, in dollars per square foot — have shifted strategy and are slashing the amount of space devoted to CDs.

Next on the agenda are office supplies and electronics.  Sales at Office Depot, Office Max, and Staples have plummeted, as Wal-Mart and Costco have expanded their line-up and dropped prices.

In electronics, Best Buy was initially viewed as the likely beneficiary of Circuit City’s demise, but many analysts now expect Wal-Mart, which recently redesigned and enlarged its selection of televisions and computers, and Amazon, which is also expanding its electronics offerings, to split much of the market share up for grabs.  Meanwhile, Best Buy has launched a new ad campaign that makes a direct appeal to shoppers not to defect to Wal-Mart.

Selling goods below cost in order to drive competitors out of business — a strategy Wal-Mart first employed against small-town drugstores in the Midwest in the 1980s and now uses for nationwide assaults on entire product categories — is technically illegal.  But U.S. antitrust enforcers have taken a very lax attitude toward predatory pricing and other antitrust violations ever since the Reagan Administration.

The consequence is an economy where power is so concentrated that it undermines the free market itself and threatens our individual liberty within it.  Bullied and financially squeezed by mega-retailers, manufacturers have little choice but to focus on producing a narrow range of products that suit these companies’ needs, while cutting support for competing retailers and eliminating investment in new products, writers, and artists.

The wave of chain store consolidation now underway adds new urgency to calls for a reinvigorated antitrust policy and a return to the idea that a competitive economy is one made up of lots of competitors, many of them small and independent.

There are signs that these initiatives are making a difference.  Market research, surveys, and anecdotal reports from small business owners suggest that “buy local” has become a priority for more people.  In many sectors, the market share of independent retailers has been holding steady for the last few years.  Most encouraging, there are more new independent businesses opening, including, most notably, neighborhood greengrocers and food co-ops, hardware stores, and some 350 new bookstores over the last four years.

Another sign that a genuine shift might be underway came on Saturday, April 18, when music fans mobbed more than 1,000 independent record stores in the U.S. and abroad as part of Record Store Day. “It was the best sales day we’ve ever had in our 18-year history,” said Eric Levin, owner of Criminal Records in Atlanta and one of the organizers of the event.

Now in its second year, Record Store Day is an annual celebration of independent music stores.  This year’s event was huge and included more than 600 in-store performances and over 80 exclusive releases produced specifically for Record Store Day.  Neilson SoundScan reported a 16 percent upswing in album sales.  The event made the top 5 news stories on Google and was the 35th most searched item on the web.

Among the top sellers were vinyl releases put out by Green Day, Radiohead, and other bands.  Sales of vinyl records, many of which include a code that buyers can use to also download the album online, have surged in the last year, up 89 percent.  “It’s a back-to-real movement akin to the farm-to-table movement,” explains Levin, whose store hosted 14 concerts on Record Store Day, including a performance by Manchester Orchestra that drew a crowd of 650.

“The hurdles of corporate power have been almost insurmountable,” Levin observed. “Fortunately, we’ve been surmounting them.”

Death of the Category Killers 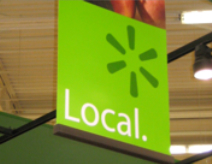 Retail The Corporate Co-Opt of Local
Retail Wal-Mart to Create 22,000 Jobs — and Destroy Man…
Sign Up for the Hometown Advantage Newsletter