While large-scale solar creates contention between environmental advocates and renewable energy proponents, the truth is that there are thousands of acres in already developed land where solar can easily fit.  This infographic explains. 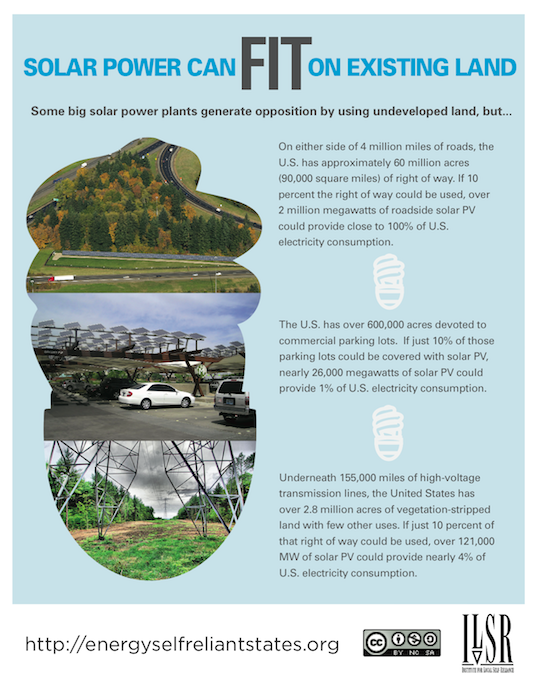 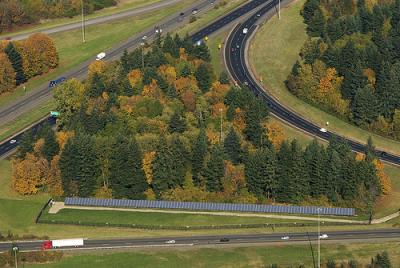 A column in the New York Times yesterday suggested that land use is the greatest environmental problem facing new renewable energy.  While getting the facts terribly wrong, it opens a door to talk about the advantages of distributed generation such as a unique proposal by Republic Solar Highways to put solar PV on highway right-of-way in California.

Robert Bryce’s column (the Gas is Greener) suggests that wind and solar have a large land footprint compared to gas and nuclear power, and therefore the latter are wiser environmental choices.  Of course, Bryce hasn’t read about the Germans, who have installed 10,000 megawatts of solar PV in the past two years, over 80 percent on rooftops.  Bryce’s concern for California meeting its 33% renewable energy standard by 2020 (the land use!) crumbles under the German’s torrid pace of rooftop solar development: if the same distributed solar PV program were done in California, the state could meet its RPS five years early without using a single acre of undeveloped land.

Bryce deserves a raspberry for his witless comment about wind farms, as well.  Before claiming that wind uses 128 acres per megawatts, he may have wanted to look at an actual wind power project.  Over 99 percent of a wind farm is simply the gaps between turbines to prevent interference (“wake turbulence”).  In fact, 80 percent of U.S. wind farms use less than an acre per megawatt, one reason that many farmers and ranchers are delighted to host revenue-generating turbines.

Despite its factual foibles, Bryce’s column underscores the fundamental problem with the renewable energy movement.  Too many people assume that wind can only be developed in 800 megawatt farms and solar power plants can only be built on hundreds of virgin desert, both linked into high-voltage transmission lines.  The Germans put the lie to this assumption with their solar program and wind power development.  And innovations in the U.S. also provide compelling counter-examples.

Republic Solar Highways, for example, has proposed a 15 megawatt solar PV project along the right-of-way on U.S. Highway 101 in California.  The plan would provide power for 3,000 homes and use land that currently gets an occasional mowing from the Department of Transportation, but is otherwise unused.  The idea has a lot of merit, as we explored in our 2010 report Energy Self-Reliant States:

There are environmental drawbacks to some centralized solar and wind projects and their attendant new transmission lines, but Bryce vastly overstates their land use requirements, and glosses over the additional land natural gas and nuclear grind up for mining and extraction.  Cost-effective distributed wind and solar power can be built in large numbers without using much undeveloped land, obviating the land use complaint.

P.S. And distributed wind and solar don’t melt down, either.

Business Forum: ‘Givings’ could help fund LRT expansion by David Morris Originally published in the Minneapolis Star Tribune, April 2, 2006 We’re all familiar with the “takings” movement, and its central argument. If a public action reduces the value of … Read More

Global retail corporations are aiming to use international trade agreements to challenge local land use and zoning regulations, according to an alarming new report from Public Citizen. … Read More