Despite its pride in having the nation’s largest community solar program––shown by the massive poster on its headquarters front doors (the above photo)––Xcel Energy can often be caught complaining (erroneously) that utility-owned solar would be more cost-effective. In the following analysis, the Institute for Local Self-Reliance explains why Minnesota’s community solar program has actually saved Xcel Energy customers millions of dollars already.

Value is the key word in deciphering whether Minnesota’s community solar program is cost-effective. In a 2013 statute, Minnesota established a “value of solar” to measure the value of energy produced by distributed solar projects, connected close to where customers use energy. The chart below shows that value calculation in each year since it was adopted. 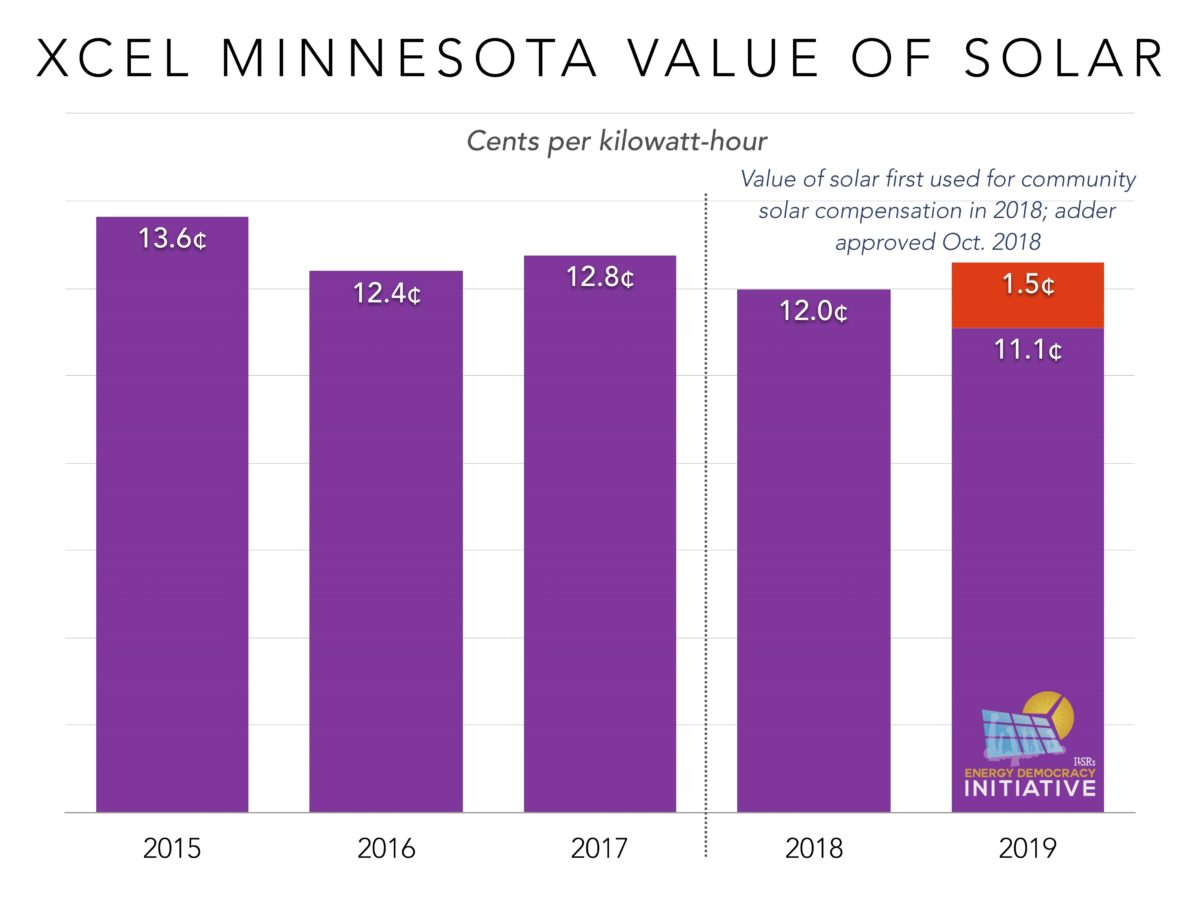 However, for a number of reasons, the state opted not to use the value of solar as the official compensation scheme for community solar until 2018. Instead, the Public Utilities Commission developed an “applicable retail rate,” for different customer classes: residential, small general service (small business, nonprofit, or public building), and large general service (large business, nonprofit, or public building). The following chart shows the applicable retail rate for community solar projects from 2015 through 2018. The vast majority of solar subscribers are paid on the Enhanced rate (which includes a price for the renewable energy credit) for Solar Gardens larger than 250 kilowatts, as only a handful of solar gardens are smaller than 250 kilowatts.

To understand if community solar is a good deal, we don’t compare it to the utility-owned large-scale solar, as those projects lack some of the unique grid and economic benefits of local, community solar. Of course, a big difference in these sources is who gets the rewards. As shown in a separate analysis, utility shareholders earn significant returns on utility-owned large-scale solar.

Instead, we compare community solar subscription rates to the value of solar, meant to match distributed solar production with its value to the grid and society. To do this, we first need to know when most of the existing community solar projects were added to the queue. ILSR has kept this data, and as the chart below shows––the thin gray bars representing initial application states––most projects now operational signed up in late 2015. 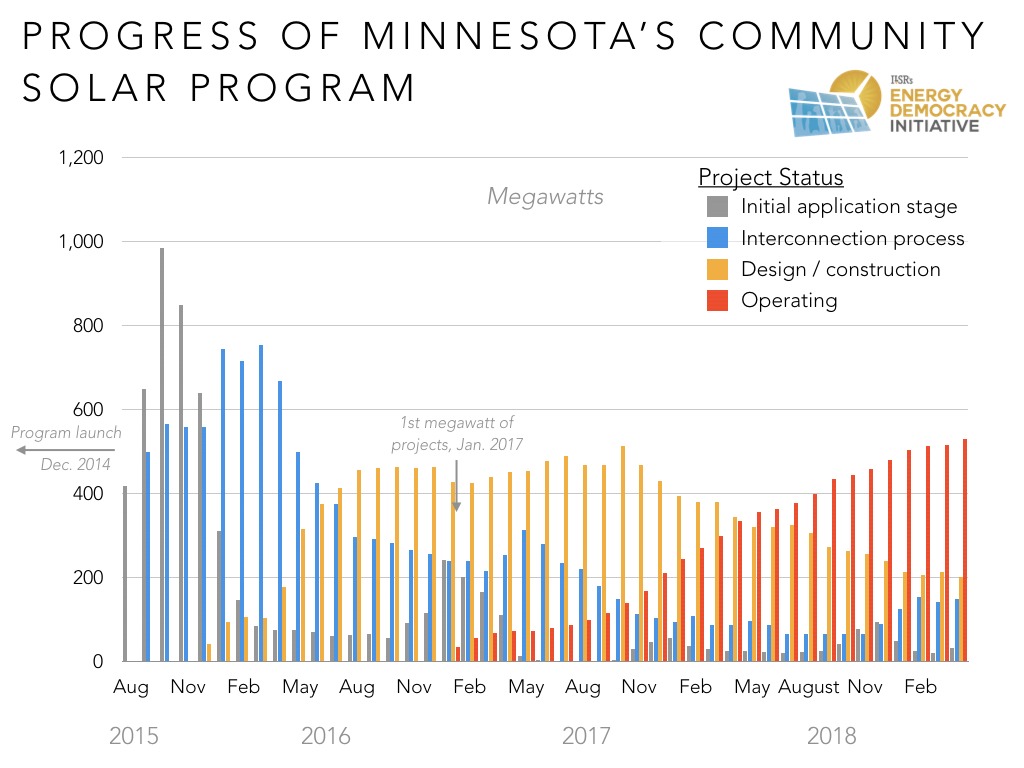 The following chart illustrates the subscription bill credits rates at the time and compares them to the approved value of solar. As we can see, the value of solar is slightly lower than credit rates for residential and small general service subscribers, but higher than for large general service. The chart also shows the 2016 rates, for comparison. 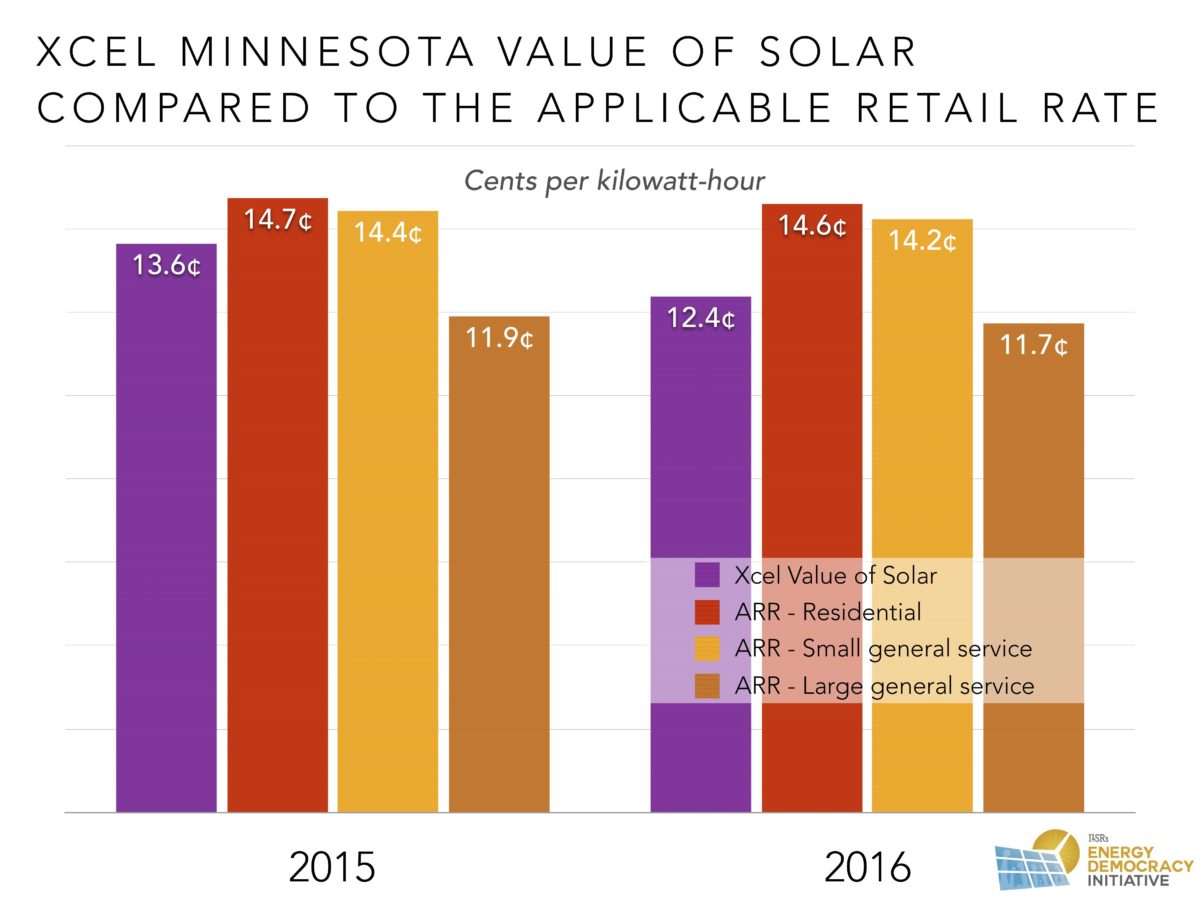 The rationale behind the value of solar is that it takes into account the value of solar energy over a long time period (25 years), a period in which there is virtually no price certainty for the fossil fuels it replaces. The applicable retail rate, meanwhile, works more like net metering. It provides credits based on the electricity rate of the customer. It may rise if rates rise––and has, by 5% from 2015 to 2018––but it can also decrease if rates decline. It’s worth noting that at the time most projects were being approved, the utility advocated for using the applicable retail rate, and not the value of solar.

The following table walks us through the calculations, showing that residential and small general service subscribers earn slightly more than the value of solar for their energy, but large general service earn less. Ironically, because these large customers subscribe to a disproportionate share of the program’s capacity, the result is a significant net annual savings for utility customers of nearly $11 million. Even if we assume half of active projects are 2016 vintage, annual savings still exceed $6 million (this calculation not shown). Note: we assumed that community solar projects produce roughly 1500 kilowatt-hours per year per kilowatt of AC capacity.

A number of factors could change this comparison. Some projects may have won approval in 2016, when the value of solar was over a penny lower. Based on ILSR’s tracking, however, that seems unlikely. The applicable retail rate has risen by nearly 5% from 2015 to 2018, for another example. Unlike the value of solar it can rise or fall. However, even with 2018 rates (compared to the 2015 value of solar that would still apply had it been used), annual savings are still above $1 million per year.

This article originally posted at ilsr.org. For timely updates, follow John Farrell or Marie Donahue on Twitter or get the Energy Democracy weekly update. Also check out over 70 episodes of the Local Energy Rules podcast! 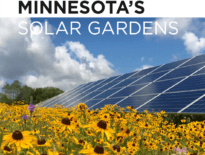 Energy Minnesota’s Solar Gardens: the Status and Be… 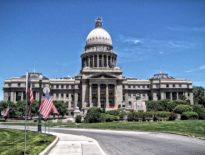