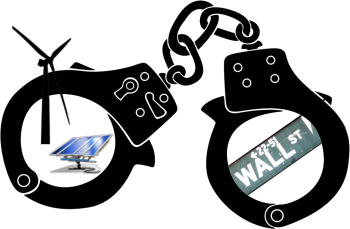 Clean energy advocates should cast aside their worries about increasing Republican scrutiny of energy subsidies.  The clean energy industry’s foolish reliance on tax incentives has already handcuffed its expansion.

Unlike the leading nations in the clean energy race, the United States has no coherent energy policy.  Rather, its energy market is balkanized by 50 distinct state policies and overlaid with poorly conceived federal tax incentives.  Federal tax incentives have one redeeming feature.  To get a tax incentive only takes one vote of Congress while getting any other kind of monetary subsidy requires two votes, an authorization and then an appropriations bill.

The drawbacks are much more substantial.  Building a clean energy future on a foundation of tax credits and deductions means significant inefficiency, reduced opportunity for the public sector, and handcuffing clean energy deployments.

Tax incentives may be politically expedient, but they are financially wasteful.  In fact, tax credits cost Uncle Sam (and the taxpayer) twice as much as handing out cash.  Why?  For many clean energy projects, the developer doesn’t have enough tax liability to effectively use the 30% investment tax credit or production tax credit.  Instead, they need a “tax equity partner” (like a Wall Street banker) who can use a big tax credit.  With some legal finagling, the two partners ink a deal that “monetizes” the entire federal incentive, but the Wall Street equity partner takes a hefty cut.  In 2010, renewable energy developers were selling their tax credits to financiers for 30-50 cents on the dollar, with the remainder padding the pockets of financiers rather than buying down the cost of clean energy.

These tax equity partnerships aren’t just an inefficient use of public dollars for clean energy, they  make locally owned projects more difficult to develop, undercutting the political clout of clean energy by reducing the local economic value of (and commensurate support for) wind and solar projects.

Tax credits also curb public sector participation in clean energy.  “Solar for schools” may be a great rallying cry for the solar industry and for education, but tax code incentives don’t apply to schools, municipal buildings or non-profits.  Instead, schools and others must seek private partners to offer them a lease, power purchase agreement, or other ownership structure that allows the project to capture at least some of the federal tax incentives.  As the following chart illustrates, however, these arrangements for schools are never quite as cost effective as privately-owned solar projects.  Furthermore, the partnerships mean the public sector can’t use its best weapon, low cost financing (e.g. bonding) to spread clean energy development.

The use of tax credits may also artificially cap the clean energy market.  Since clean energy projects must rely on a limited set of tax equity partners and a limited-size tax equity market, when tax equity dries up, so do wind and solar projects.  The economic crisis of 2008 made the problem particularly evident, as the tax equity market shrank by 80 percent from 2007 to 2009.  Only the cash grant program saved the wind and solar industries from total collapse in the intervening years (2009-11), and the cash grant will likely expire at the end of 2011.  The following chart from a SEIA presentation illustrates [pdf] the problem, even though it was devised before the 1-year extension of the cash grant in 2010. 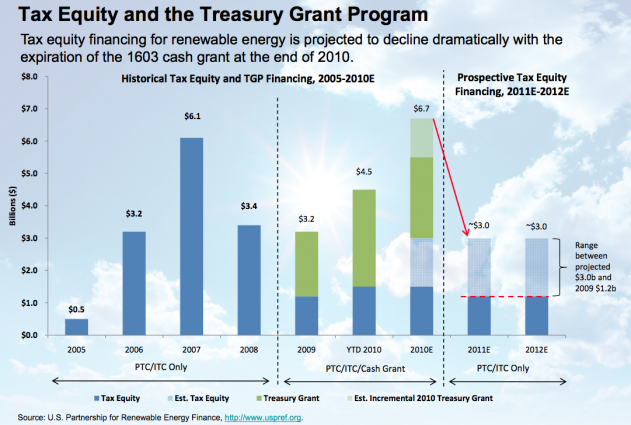 The problem of limited tax equity isn’t just short term.  Marshal Salant, managing director of Citigroup Global Markets Inc., said in a recent interview: “There’s more demand for tax equity to finance renewable energy projects than we will ever have in the way of supply.”

There are alternatives to the reliance on tax incentives (outlined last week in our discussion of Germany’s run-away success with its comprehensive feed-in tariff energy policy).  But until the clean energy industry is ready to admit the folly of its marriage to tax equity, the American market for wind and solar will suffer.