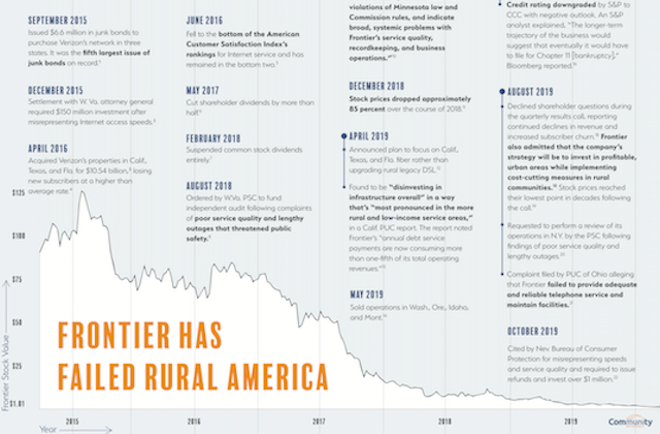 Despite raking in hundreds of millions in government broadband subsidies, Frontier Communications has failed time and time again to bring reliable, high-speed connectivity to the rural communities it serves. Instead of investing in network upgrades, Frontier has neglected its rural infrastructure to the detriment of its subscribers and the company’s own financials, with its worsening service quality paralleling its plummeting stock value.

Our new fact sheet, Frontier Has Failed Rural America, presents evidence of Frontier’s negligence and suggests that rather than continuing to trust Frontier, government officials should look to publicly owned and community-minded providers to connect rural residents, businesses, and institutions.

Federal and state government agencies have given Frontier nearly $2 billion to expand and upgrade its rural broadband networks. The company has received approximately $1.7 billion from the Connect America Fund Phase II federal subsidy program and millions more in grants from states like Minnesota and New York.

Even with the subsidies, Frontier ultimately failed to connect rural communities with high-quality broadband. The company has repeatedly chosen not to upgrade rural networks, leaving subscribers with poor, unreliable service that doesn’t fulfill their basic communications needs.

Our fact sheet, Frontier Has Failed Rural America, features events from the past five years that demonstrate Frontier’s inability to solve the rural broadband problem, including:

These examples make a strong case as to why state and local officials should look to local providers to connect their communities, instead of continuing to reward Frontier for disinvesting in rural America. 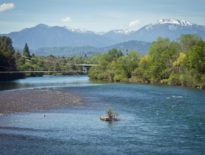 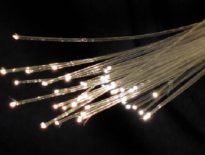