How self-sufficient in energy generation could states be if they relied only on their own renewable resources? In November 2008, ILSR began to address this question in the first edition of Energy Self-Reliant States.  That report included a limited set of resources – on-shore wind and rooftop solar photovoltaic (PV) – and also examined the potential for biomass-derived transportation fuels.

This updated edition of Energy Self-Reliant States narrows the focus to electricity, but includes virtually all renewable resources (on shore and off shore wind, micro hydro, combined heat and power, geothermal, rooftop PV).  We also discuss the potential gains from improving energy efficiency and estimate the per kWh costs for each state to become energy independent.

The data in this report suggest that every state could generate a significant percentage of its electricity with homegrown renewable energy. At least three-fifths of the fifty states could meet all their internal electricity needs from renewable energy generated inside their borders.  Every state with a renewable energy mandate can meet it with in-state renewable fuels. And, as the report discusses, even these estimates may be conservative. 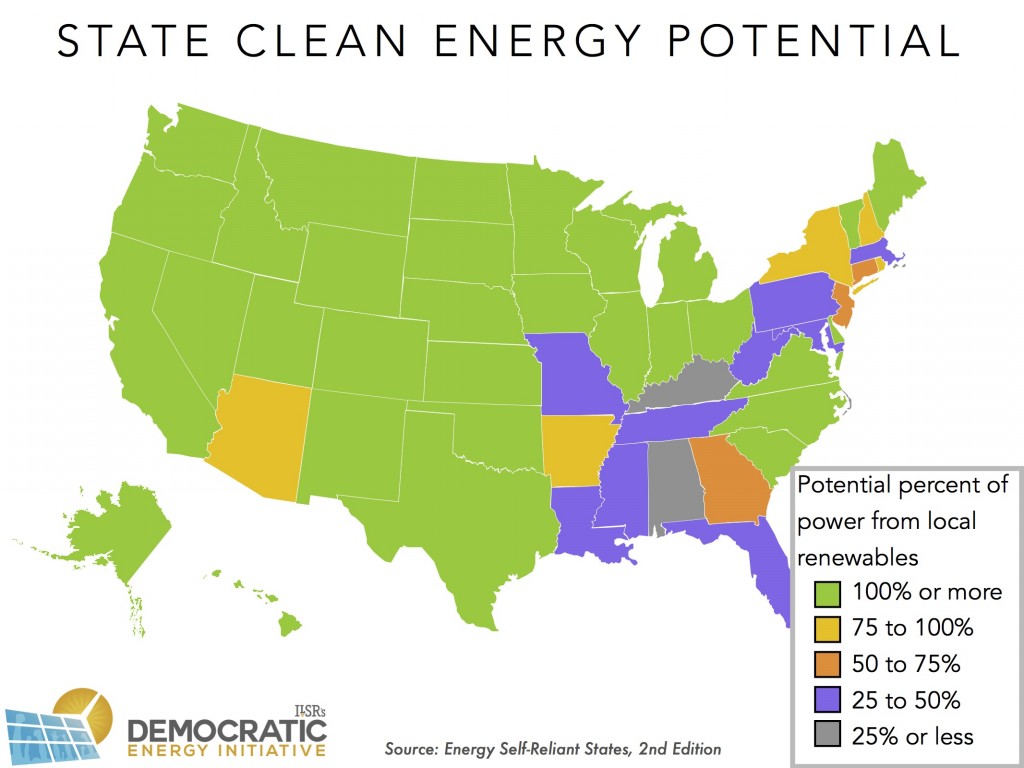 Renewable energy is found everywhere and in most cases can be economically harnessed everywhere.  Federal policy should encourage all states, communities, individual households and businesses to maximize their internal use of this ubiquitous resource.  Such a policy would reinforce the clear desire for states and cities to combine a low carbon energy strategy with an aggressive energy-based economic development strategy.

Regrettably, current federal energy policy largely focuses on harnessing the renewable energy in a handful of states, constructing a $100-200 billion extra high voltage national transmission network and transporting that energy a thousand or more miles to customers in other regions.

The rationale for this focus on new extra high voltage transmission lines is that while renewable energy is widely distributed, the availability of these resources and the cost of harnessing them vary widely.

However, when transmission costs are taken into account, the net cost variations among states are quite modest.   And when we factor in the overall social, environmental and economic benefits to the 50 states from homegrown energy generation, self-reliance is almost always cheaper than import-dependence.

Newer (May 3, 2010):  Energy Self-Reliant States has been updated with data from new wind estimates released by the National Renewable Energy Laboratory.  See a discussion of the changes and/or download the revised report.

Energy Watch: John Farrell Interviewed on Etopia News on …
Energy 31 States can be Self-Sufficient with In-State Ren…
Sign Up For Energy Democracy News