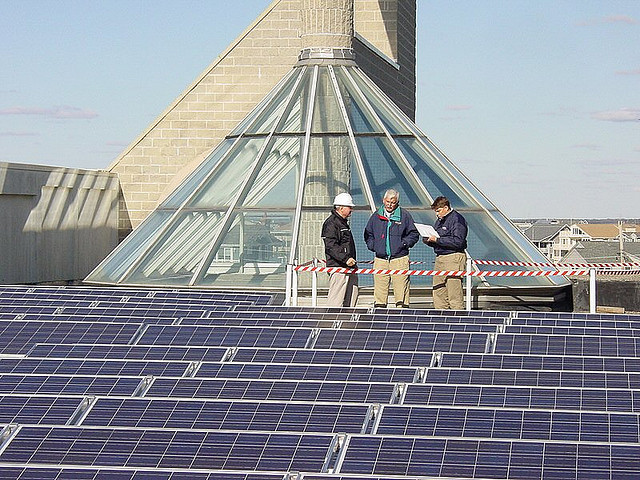 From the ability to reduce peak demand on the transmission and distribution system, hedge against fuel price increases, or enhance grid and environmental security, solar power has a monetary value as much as ten times higher than its energy value.

The cost of residential-scale distributed solar PV is around 23 cents per kilowatt-hour (kWh) in a sunny climate like Los Angeles, 24 cents in Colorado.  While the average cost of grid-delivered wholesale electricity in many parts of the country is low (4 cents per kWh), a new report lists many ways that distributed solar adds value beyond electrons.

Distributed solar power provides electricity on-site or near to demand, reducing transmission losses, as well as wear-and-tear on utility equipment by mitigating peak demand.  It also eliminates the need to hedge against fuel price swings.  These benefits add 3 to 14 cents per kWh to the utility bottom line.

Distributed solar also provides value to society, by reducing the economic losses of blackouts (just 500 MW of distributed solar could have prevented the massive 2003 Northeast blackout), reducing pollution, hedging against finite fossil fuel supplies, and creating jobs.  These benefits add 11 to 16 cents to the taxpayer’s bottom line for every kWh of distributed solar.

These values come at little to no integration cost, since currently low penetrations of solar power pose no threat to grid operations and balancing.

The adjacent chart illustrates the full value of distributed solar PV, using the midpoint values from the report.  While this chart indicates that solar producers are paid the average price of grid electricity (which includes cheap power from fully paid-off power plants), the second chart indicates that solar is paid the avoided cost for the utility to add new generation.  While solar’s value is positive in either case, the value is significantly higher when its energy is valued at avoided cost (in California, this value is often called the Market Price Referant, and is around 11 cents per kWh).

Solar’s energy value can be even higher.  In a recent post, we estimated that the value of solar electricity based on the time-of-production in Los Angeles was 15 cents per kWh over a year.  We will discuss the value of solar power to the grid in more detail in our forthcoming report on distributed generation, likely released in May 2011.

Remarkably, much of the projected value for solar is reflected in federal and state solar policy.  The federal investment tax credit and accelerated depreciation often account for as much as half of the up-front cost of a solar project, a(n) (inefficient) taxpayer-financed purchase of the social value of solar power.  State renewable energy policies often require utilities to purchase the environmental value of solar in the form of renewable energy credits (RECs).

However, the grid value of solar (illustrated in blue in the charts) often goes unrewarded.  This value should be captured in the price utilities are willing to pay for solar, but more often the price a utility pays is either the wholesale price (4 cents, as shown in the first chart) or the avoided cost (shown in the second chart).  Neither of these prices reflect the value of distributed solar in reducing peak demand, relieving stress on grid infrastructure or avoiding grid losses.

Perversely, federal policy frequently provides unnecessary incentives to high-voltage transmission for reinforcing the grid, when distributed solar can provide much of the same value.

Solar power is not the least expensive method of delivering clean electricity to the grid, but its value to the grid and society is far greater than its power production cost.  Federal and state policy toward solar policy should focus on rewarding that value and encouraging the spread of distributed solar power.