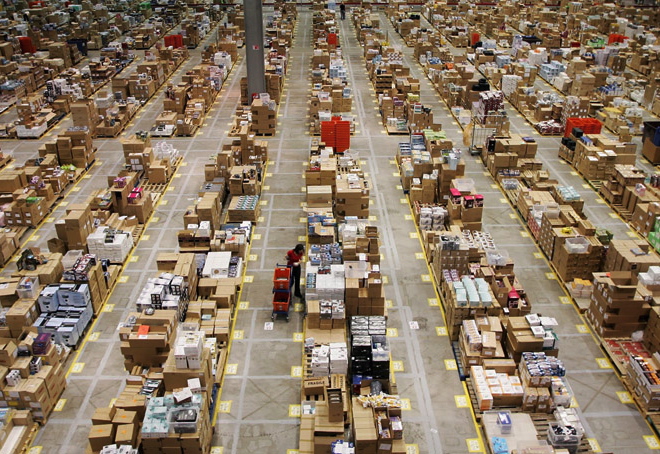 Amazon’s sales have fallen in states where it is now required to collect sales taxes, according to a new study by three economists at Ohio State University. The study offers striking evidence of how much Amazon’s dominance of the retail marketplace is owed to nearly 20 years of favorable tax treatment.

The economists examined credit and debit card data for 246,000 households, focusing on five states that recently enacted laws requiring Amazon to collect sales tax: California, New Jersey, Pennsylvania, Texas, and Virginia. They analyzed household spending at Amazon three months before and after the law took effect, and then compared the findings to spending patterns in states that did not adopt an online sales tax law.

Households cut their spending at Amazon by about 10 percent when the company begins collecting sales tax, the economists found. The effect is even greater for larger purchases. Spending falls 16 percent for purchases larger than $150 and 24 percent for those over $300.

That sales tax still matters this much to Amazon’s fortunes is quite remarkable. One might imagine that the company’s size and efficiency, its vast online marketplace and formidable distribution logistics, would be more than enough to outrun its competitors. But in fact, not having to collect sales tax in most states still provides a significant competitive edge, even at this late date.

We can only imagine how different the retail landscape might be today had Congress passed an internet sales tax bill a decade ago, when Amazon was big — it had revenue of $7 billion in 2004 — but not yet in possession of the level of market power it now has. Amazon posted $73 billion in sales last year. The retailer, which owns dozens of internet brands, including Zappos and Diapers.com, now accounts for a staggering one-third of all the items Americans buy online.

But this study reveals what Jeff Bezos has undoubtedly known for years: Amazon’s success, its track record of shuttering local businesses, is as much a product of government favoritism as it is of its own ingenuity. Indeed, Amazon’s actions from its founding in 1995 provide ample evidence that having a sales tax advantage has always been pivotal to its strategy:

Today, more states are insisting that Amazon play by the same tax rules that local retailers are subject to. But the online giant is still exempt in more than half the states and continues to devote considerable energy and financial resources to maintaining that status. This new study makes it abundantly clear why. As one of the study’s authors told the New York Times, “I think this is their dirty little secret, something they’ve never been forthright about it — the extent to which this sales tax advantage has benefited them.”