Demand for fiber-to-the-home (FTTH) connectivity across the 4.74-square-mile Iowa community (est. pop. 5,100) is so substantial that iVinton, governed by the Vinton Municipal Electric Utility (VMEU), is having to schedule installations a month out as requests for residential service have surpassed the manpower available to complete them as quickly as they had hoped.

As the telecommunications utility transitions out of its start-up phase – from working with external consultants to bringing all operations in house and limiting outside vendors – the biggest challenge iVinton has had to overcome is not having enough employees to take on the necessary roles, Matt Storm, iVinton’s Municipal Communications Manager, told ILSR in a recent interview.

Still, the utility is plugging away to keep up with requests for residential installations as iVinton is eager to meet the surge in demand. “We’re supplying a service that’s needed for the community, and the community has responded,” Storm told ILSR.

Just over a year into the municipal fiber network being operational, 1,000 of 2,450 residential and business premises, or 41 percent of the available premises in Vinton have made the switch. They’ve been lured by increased bandwidth, a higher quality of service, and the benefit of iVinton being a local provider with service technicians in town. Today, iVinton offers three symmetrical speed tiers to residents: 100 Megabit per second (Mbps), 250 Mbps, and 1000 Mbps connections for $70, $90, and $120 per month respectively.

The utility fiber service has been transformational for residents, businesses, and government operations alike since portions of iVinton’s network first went live in March 2020. The fiber utility recently lit up the Benton County Courthouse, as well as its off-site locations and local schools. These critical community institutions had to rely on DSL and subpar cable service from MediaCom before iVinton came along.

Construction of iVinton’s citywide fiber network began in July 2019, but the proposal for the network actually dates back to 2015. That’s the year the community voted overwhelmingly (792 to 104) to form a telecommunications utility, the Vinton Communications Utility, and put the community’s municipal electric utility (VMEU) in charge of the initiative.

In 2017, Vinton began a feasibility study for the project, and by spring 2018 the town estimated it would cost $8.9 million to connect all premises within the community. In late 2018, the electric utility board contracted with Farr Technologies to design the fiber network and in February of 2019 the VMEU board voted to move forward with construction.

According to Vinton Newspapers, the utility board approved two seperate bond issues to construct the fiber-to-the-home network. The electric utility board bonded for $5,675,000 to deploy fiber and the communication utility bonded for $3,868,000 to cover the cost of fiber drops and other equipment.

But it was the onset of the pandemic that exposed the shortcomings of the service offered by incumbent providers, inspiring the city to speed up network deployment and connect its first residential subscribers in summer 2020.

As we reported in 2017, Karr said the Internet speeds available at the time could be frustrating. Before fiber service via iVinton was available, it took hours for his employees to upload video files for clients, a task which he recognized would take “only a couple of minutes” in a larger urban area with faster Internet connections.

Yet, instead of picking up and moving his business’ operations to another town, Karr began lobbying hard in 2014 for an increase in high-speed broadband service, and became instrumental to rallying the community around the idea. In fact, Karr became such a local champion that he was nicknamed “The Father of iVinton” and invited to the fiber utility’s office to “flip the switch” to begin testing the new fiber network in 2020.

“Karr . . . had the vision for this project at a time when [the Internet] was just beginning to be a necessary service for most of us,” reports Vinton Today. There is little to entice local businesses to move away from Vinton these days, as they have access to the bandwidth necessary to remain globally competitive.

There is a long history of local broadband excellence in Iowa, as a comparatively large number of communities have invested in fiber networks to improve economic development, including Spencer, Lenox, and Harlan.

Communities in the state have been especially successful in reclaiming their digital self-determination, despite Mediacom and incumbent telephone company CenturyLink historically fighting hard to prevent municipalities across the state from passing the necessary referendum to grant city governments the authority to establish a municipal broadband utility.

In response to iVinton’s success, cable provider MediaCom has attempted to maintain its subscriber base by lowering their prices and trying to lure subscribers with slick marketing campaigns, according to iVinton’s Matt Storm. Though occasionally an opinion article in the local newspaper is published making the typical anti-muni arguments, Storm said, most residents see it for what it is: propaganda from the large ISPs that aims to protect their regional monopolies. 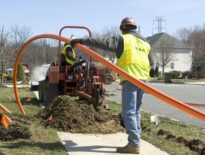 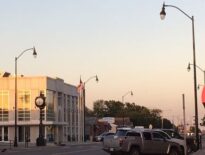