MINNEAPOLIS, MN (Jan. 26, 2011) – For the fourth year in a row, a national survey of independent businesses has found that those in communities with an active “buy local” campaign have experienced markedly stronger revenue growth compared to those located in areas without such a campaign. (Download the report.)

The survey, which was conducted over an 8-day period in January, gathered data from 2,768 independent businesses, including retailers, service providers, restaurants and others.  It found that those in places with a “buy local” initiative reported revenue growth of 5.6% on average in 2010, compared to 2.1% for those elsewhere. 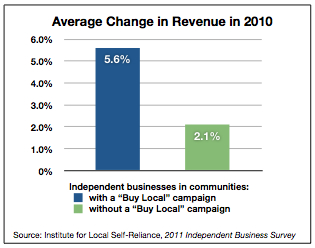 Among independent retailers, which accounted for nearly half the respondents, there was a similar gap in holiday sales performance, with those in “buy local” communities seeing a 5.2% increase in holiday sales, while those elsewhere reported an average gain of 0.8%.

Nearly two-thirds of respondents said that public awareness of the benefits of supporting locally owned businesses had increased in the last year, while 24% said it had stayed the same and only 3% said it had decreased.

Business owners in cities with active “buy local” campaigns reported a wide range of positive impacts on their business.   Almost half reported that the campaign had brought new customers to their business and 55% said it had made existing customers more loyal.  More than two-thirds said local media coverage of independent businesses had increased and 51% said that local government officials were now more aware and supportive of the needs of independent businesses.

Comments from survey participants highlighted key challenges facing independent businesses, including the weak economy and government policies that often favor their large competitors. Yet businesses active in “buy local” initiatives repeatedly cited these efforts as making a difference in their survival and success. “It is abundantly clear to me that a greater percentage of the public is attuned to the value of supporting local independents compared to just a couple years ago,” noted one Arizona business owner.

Complete results may be downloaded here.

Similar surveys over the last three years likewise found that independent businesses in cities with active “buy local” campaigns reported stronger sales gains than those in communities without such initiatives. 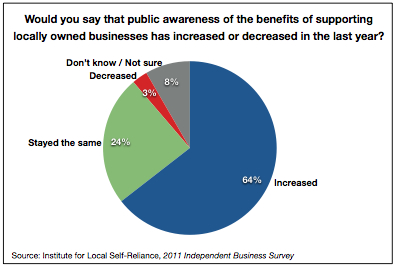 This survey adds to the growing body of evidence that people are increasingly seeking out independent businesses and that shift is having a tangible impact on the bottom line,” said Stacy Mitchell, senior researcher with the Institute for Local Self-Reliance.

“For the fourth year in a row, independent retailers in communities with active ‘shop local’ campaigns have shown stronger sales than retailers in communities without such campaigns,” said American Booksellers Association CEO Oren Teicher.  “More and more shoppers are voting in favor of independent retailers with their spending, proving that they recognize that bigger is not always better — and making clear that they value a strong, unique, and vibrant community.  The potential for locally owned businesses committed to working together could not be greater.”

“This survey offers further proof that, with sustained efforts, communities can indeed raise local consciousness and build a culture of support for local entrepreneurs,” said Jennifer Rockne, executive director of the American Independent Business Alliance.  “Remarkably, most of the campaigns operated by Independent Business Alliances are funded by businesses paying $20 or less per month in dues.  They’re getting quite a return on their investment.”

“We are encouraged by the positive impact, as well as the positive change in consumer behavior our members are seeing as a result of ‘Buy Local’ campaigns,” said Michael Morris, vice president of marketing for TriMega Purchasing Association, a national buying consortium of independent office supply dealerships.  “Our dealers have reported improved customer loyalty, increased awareness of their brand, and more doors being opened to them thanks to ‘think local’ oriented initiatives.”

“Independent Business Alliances and ‘buy local’ campaigns are becoming a basic tool for independent businesses to help differentiate themselves from their big-box and internet competition by highlighting their meaningful connection to the community,” said Kathleen McHugh, president of the American Specialty Toy Retailing Association. “Once consumers understand why supporting local business is important to their community, they connect it to why they live where they do.”

“Small, local businesses generate the majority of new jobs in the US,” said Michelle Long, Executive Director of the Business Alliance for Local Living Economies.  “Buy Local First campaigns help bring these businesses and residents together to build community health and wealth — from the bottom up.” 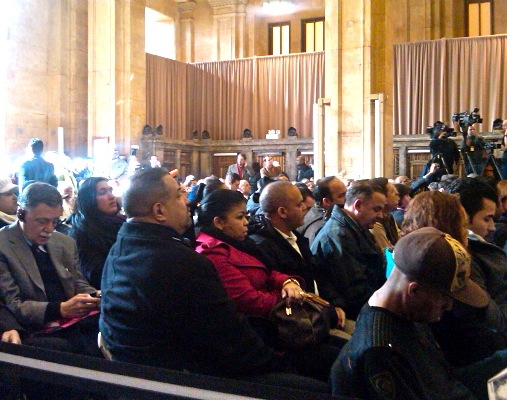 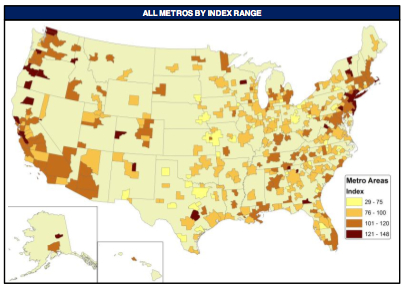