Newly released data from the U.S. Department of Transportation show that the average American household is driving less than it did in 2001. But, while the number of miles logged going to work, social events, and other activities declined over the last decade, the number of miles families drive for shopping each year continued climb — although at a much slower pace than in the 1990s.

The figures come from the National Household Travel Survey, which is conducted every 6 to 8 years. The 2009 data were gathered during some of the worst months of the economic collapse, from late 2008 into early 2009, which may have skewed the results somewhat as people were driving less than normal.

The findings show that, since the last survey in 2001, overall miles driven per household fell 4.4 percent, but shopping-related driving bucked the trend, expanding by 1.3 percent to 3,102 miles per year for the average household. 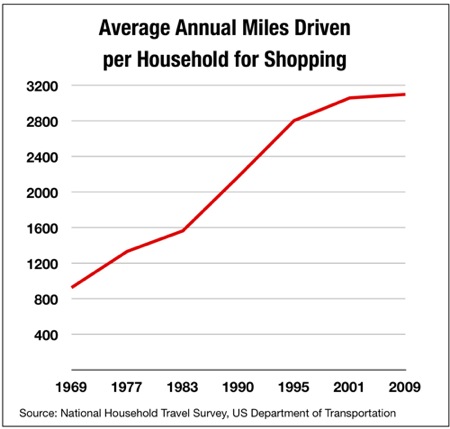 That’s up from about 900 miles per year in 1969. Over the last 40 years, shopping-related driving has been by far the fastest growing segment of household travel, more than tripling since 1969, while overall driving rose 63 percent.

While suburbanization accounts for much of the general growth in driving, it does not explain why the number of miles households drive for errands grew so much faster. As I’ve argued elsewhere, the probable culprit is the rise of big-box stores. Where once a gallon of milk, a prescription, or a piece of hardware was available at a neighborhood store only a few blocks or short drive away, many of those small, local businesses are now gone. They’ve been replaced by a much smaller number of giant superstores, each of which serves a much larger region.

As a result, the average trip to a store is now about three miles longer than it was in 1990. That adds up to a lot of additional miles when multiplied across 113 million households that make an average of 470 trips to stores each year.

But the good news is that the growth in the number of miles Americans log for shopping has slowed substantially from the rapid increases of the 1990s, and there are signs that neighborhood businesses may be making a comeback. A recent study by CEOs for Cities found that homes located within walking distance of local stores have held value much better during than downturn than houses located in places where picking up a loaf of bread entails driving several miles to a big-box store.

This renewed interest in living near local businesses is good news as we look for ways to reduce our impact on the climate. A Seattle study found that living in compact, mixed use neighborhoods that include small businesses reduces a family’s greenhouse gas emissions by an average of 26 percent.

Miles Driven for Shopping Continues to Climb, But Pace Slows 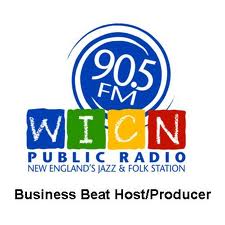