John Lester, General Manager of Clarksville Connected Utilities (CCU) in Clarksville, Arkansas, knows a thing or two about the value of a municipal broadband network.

“Just keeping the dollars in Clarksville is gonna have a big impact. Do you have a calculator handy?” Lester asked me, when I called him earlier this month to learn more about the city’s planned foray into residential broadband services.

“Let me talk you through something,” he replied, after I said I did. “Let’s say we’ve got 4,500 potential customers and 75 percent of them get high-speed Internet, in some fashion. What’s that number?”

From there, he ran through a handful of calculations to illustrate the economic benefit of Clarksville’s new Fiber-to-the-Home network. Assuming residents save about $20 per month and the savings continue to circulate locally, the network could grow the city’s economy by $4 million every year.

“That stays in our consumers’ pockets right here in Clarksville, Arkansas,” Lester explained. “There is an economic impact today and every year going forward.”

Residential broadband service is only the most recent evolution for Clarksville’s municipal fiber network, which already connects utility infrastructure as well as area businesses and community anchor institutions in the city of nearly 10,000. Home installations are due to start soon, depending on delays caused by the global Covid-19 outbreak.

Starting With a Plan

Clarksville’s fiber journey began in 2016 when the city utilities department (which rebranded last year to Clarksville Connected Utilities) deployed a SCADA system to connect its electric, water, and wastewater systems. At the time, Lester was already thinking about how the rest of Clarksville could benefit from the utility’s fiber network, drawing on his prior experience as the city manager of Chanute, Kansas. “We absolutely needed a communications system for our utility infrastructure,” he explained, “but we leaned strongly on one of Stephen Covey’s Seven Habits [of Highly Effective People] and that was ‘begin with the end in mind.’”

Next, the city underwent a thorough planning process to determine how it could leverage its existing fiber ring to connect the community and what the best business model was. Clarksville ultimately decided to run the network itself, instead of building the infrastructure and partnering with a private company to provide broadband access. “When it really boiled down to the numbers, it made the most sense for us to operate the network,” said Lester.

Clarksville’s first priority was to get local anchor institutions hooked up to the municipal network, before connecting businesses and finally homes. The Clarksville School District was an early customer. Because of CCU’s new fiber network, the district was able to subscribe to two dedicated fiber strands capable of 10 Gigabit per second speeds at a lower cost than it paid previously. After CCU began providing business connectivity, a local company, Munro Shoes, was even able to expand production and create 25 new jobs.

As CCU built out fiber, the municipal utility was always planning for future uses of the network. Lester described their mindset:

Everytime we looked at something or touched something, we envisioned what that long-term gain might be and we built to that long-term gain. That’s why there are 288 strands in the core cable. That’s why, when we put in boxes to string the fiber through, we put in extra conduit… All the people that we have talked to who have been in this market for a while, they’ve all said, ‘Nobody comes back to us and says we put too much fiber in.’

Thanks to that foresight, Clarksville’s municipal network is well prepared for its upcoming expansion into residential services and beyond. “Even though 1 gig is the standard now, what’s on the near horizon is 10 gig,” Lester said. “We have already built in those elements in the network to allow us to go to 10 gig without a heavy lift.” Clarksville began construction on the residential fiber network last September, and Lester expects to finish building the distribution portion of the network in April. When we first spoke on the phone, Lester said that the utility was planning to start connecting households to the fiber network, but the growing Covid-19 outbreak is now forcing delays. According to a recent Facebook post, CCU will only complete the outside portion of home installation surveys for now.

Already, CCU is seeing a lot of interest from city residents. More than 670 people, including some who live just outside of Clarksville, have registered on CCU’s CrowdFiber site, out 4,500 potential subscribers within city limits. So far, advertising has mostly been through word of mouth. “In a small town, that’s the most powerful type of advertising you can have,” Lester pointed out.

In an early survey, which asked respondents whether they would switch to a municipal network if it offered the same service at the same cost, 67 percent said they likely or very likely would, “just to talk to somebody on the phone that they knew,” Lester said. CCU is taking the community’s desire for quality, hometown service to heart — “Part of our tagline is the latest technology combined with good old-fashioned service.” Lester shared.

Once CCU is able to proceed with home installs, households will be able to subscribe to both Internet access and VoIP services, which will be resold from a local telephone company. Residential broadband service tiers start at 100 Megabits per second symmetrical for $44.95 per month and go up to 1 Gigabit per second symmetrical for $89.95 per month. Businesses can subscribe to up to even higher 2 Gigabit per second speeds. There is no charge for home installation.

In addition to keeping residents’ money in the local economy, the goal of the municipal fiber network and the utility’s other efforts, like its solar power plants, is to attract people and businesses to the community. “We’re hoping that this initiative . . . can help market the community because it’s about economic development and community development,” Lester explained.

Listen to Community Broadband Bits episode 367 to learn more about Clarksville and its growing fiber network. 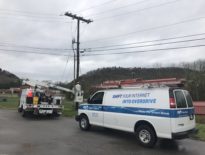 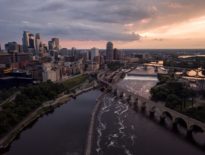