One of our kindred spirits across the pond reached out to me after I wrote about Vermont's self-funded community network. The B4RN initiative, Broadband for the Rural North, has launched using a coop model that will offer 1Gbps connections to everyone in the covered territories.

The business plan is available here.

Broadband for the Rural North Ltd has been registered as a Community Benefit Society within the Industrial and Provident Societies Act 1965 (IPS), and is controlled by the Financial Services Authority. Shares will be issued to provide funding for the project and members of the community will be encouraged to subscribe to the share issue. The share issue will comply with the Enterprise Initiative Scheme established by HMRC to encourage individual share holdings in new and developing companies. Under certain circumstances investors could reclaim 30% of the value of shares produced.

The initial share offer will be £2,000,000 of shares with a face value of £1, to be launched in late 2011 and open for 1 year. The project is expected to commence on site in early 2012 and completed by the year end. The initial network will be progressively added to over subsequent years until approximately 15000 properties in adjoining rural parishes are completely connected to the FTTH network.

To keep costs low in their rural areas, B4RN will be taking a non-traditional approach: B4RN will adopt a different approach; we will lay the duct not on the highway but across the farmland on the other side of the wall. Digging a narrow trench and installing a duct within it is dramatically less expensive across private farmland than along the highway. The work can be done by agricultural workers and the farmers themselves; it’s not high technology, similar to laying a simple water or drainage pipe which they do all the time. The combination of lower cost labour and simple installation without the regulatory burden of the street works act and similar impediments results in a dramatic reduction in cost per metre installed. Of course the costs of the materials will actually be rather higher than those paid by telecommunications companies due to our smaller scale of operations; however this is much more than offset by the reduced laying costs. Where necessary we will use the highways but this should be for a small proportion of the duct length, mainly for road crossings and short sections where the farmland is either not available to us or unsuitable. We will be applying to OFCOM for Code Powers to permit us to do this in the same way as any other telecommunications company.

The big problem is that for this model to work the land owners must be prepared to grant free wayleaves to lay duct across their land. Clearly they would refuse to do this if the applicant were a traditional telecommunications company out to make a profit, but if it were a community owned cooperative run for the benefit of the community the story is different.

They are looking for a very ambitious take rate - on the order of 80% in year 4.

They have been receiving a lot of press coverage, which should help in their efforts to sell the shares in the network necessary to finance it.

MuniNetworks History of Monticello and TDS: Be Wary of Incumben… 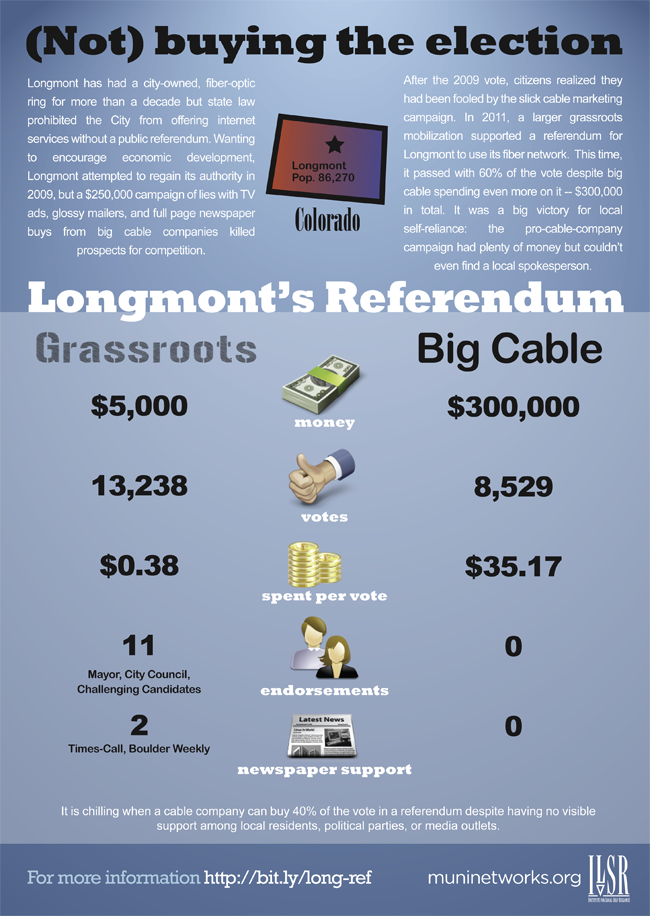