Here are updates on anti-incineration efforts in the following locations: Montgomery County, Maryland; Carroll County, Maryland; Hartford, Connecticut; Springfield, Massachusetts; and Cork Harbour, Ireland. Also, an update from Jeffrey Morris on the Cost of Incineration, and a new video from Paul Connett.

In response to a request from the County Executive, the Sugarloaf Citizens Association convened a small group of informed citizens to critique a draft 10-year solid waste management plan prepared by the County environmental agency that called for the continued use of a County owned garbage incinerator. The Association engaged Mike Ewall to prepare the report, which was forwarded to the County Council and the Department of Environmental Protection. ILSR was an advisor and a researcher for the project.

In support of our member group, Sugarloaf Citizens’ Association, we worked with them and other local environmental leaders forming Zero Waste Montgomery County to issue this report and to advocate for its recommendations.

“This detailed report documents how incineration is worse than landfilling, analyses the alternatives, and recommends what the county should do. It debunks pro-incinerator propaganda by Covanta and the U.S. Environmental Protection Agency.”

The power point with overview slides is here: http://www.energyjustice.net/md/beyondppt.pdf

National Public Radio News Station WBUR in Boston, reported on April 2nd that the the Massachusetts Department of Environmental Protection has revoked a key air permit for a controversial proposed biomass plant in Springfield.

The permit for the Palmer Renewable Energy facility — technically called the “Final Plan Approval” — was issued in 2012 and was revoked because of a lag in construction activities as well as major public health and environmental justice concerns.

Under state law, MassDEP can rescind a project’s final permit if it doesn’t begin construction within two years, or if it puts construction on pause for more than a year.

Sens. Ed Markey and Elizabeth Warren said in a joint statement. “We are thrilled to celebrate this victory with the Springfield residents who fought so passionately against it. Today’s decision will save lives.”

The facility would have been the state’s only large-scale biomass plant and would have burned about 1,200 tons of waste wood per day in the heart of a state-designated environmental justice community.

Nearly one in five children in Springfield have asthma; the air quality is so poor that the Asthma and Allergy Foundation of America has ranked it the “Asthma Capital” of the country.

“The last thing the asthma capital of the U.S. needs is a plant spewing air pollution and further imperiling public health,” Caitlin Peale Sloan, interim director of the Massachusetts Chapter of the Conservation Law Foundation, said in a statement. “Springfield residents made their opposition to this polluting plant clear, and DEP officials have handed them a win today. The fact is that burning biomass is neither clean nor renewable and it should be left in the past with fossil fuels.”

Springfield Against the Palmer Plant, sponsored by Arise for Social Justice organizations, coordinated opposition to the plant and held a protest in 2019.

“I am overjoyed that this 12-year battle looks like it’s coming to a close,” said Tanisha Arena, executive director of Arise for Social Justice, a nonprofit that aids and advocates for lower-income residents of Springfield. “Residents of Springfield can literally breathe a sigh of relief.”

Because of contamination in the city’s single stream curbside bins, the city of Hartford is now redirecting most of its recycling to a nearby incinerator, which means tons and tons of recyclable materials are going to waste while the city spends about $30,000 a month trying to deal with the problem.

Over the last two years, the amount of material sent for recycling in Hartford has dropped by about 75%. According to the Department of Public Works, the culprit is contaminated recycling bins, which are loaded up with trash and ruin any chance of a recycler accepting the material.

“In any recycling commodity market, you can’t sell garbage,” said Tom Gaffey, director of recycling and enforcement at the state’s materials processing facility. “There’s no market for garbage.”

“Hartford … like many big cities, has a serious problem with controlling contamination in their recycling,” Gaffey said. “Consequently, when the truck arrives at our facility and tips their load, the load is highly contaminated and we have to reject the load.”

See the article at NPR, Hartford is Burning Its Recycling, And It’s Costing The City 30k A Month

Many define the China recycling import ban as the problem that has worked its way down to local markets.

ILSR questions this conclusion as cities have switched back to dual stream recycling and are finding that their clean materials are getting into the market place. Other cities are attempting to reduce contamination through education and improved private sector and public sector processing facilities.

“After 20 years of roller-coastering on a single incinerator application in Cork Harbour, we finally have some good news. The High Court upheld a challenge to the third application for planning for a large incinerator in Ringaakiddy, Co Cork, granted in 2018.”

The previous Planning Board decision to approve the facility was “biased by reason of the prior involvement of one of its members”.

The application isn’t dead, as we still await final orders from the judge, but it is a huge step in a great direction, and welcome news.

And just as importantly – a great video to share

Paul Connett, an indefatigable international anti garbage incineration campaigner, had his birthday recently and a fun time was had by campaigners from all over the world with whom Paul has worked.

We put a video together a while back with Dr Paul Connett, Jeremy Irons and Prof Vyvyan Howard outlining why incineration is a bad idea for the community and for the planet. “It’s short and to the point!”

“A big huge thank you to Paul and to everyone else who has helped us in this long, long Cork Harbour campaign.

An economist looks at garbage incineration

As state and local officials all over the country will be facing tough, important decisions about waste disposal in 2021, Jeffrey Morris,  Sound Resource Management Group, Inc., focuses on Minnesota, which is the third leading state in the use of incineration, behind Florida and New York. See “Burning garbage: Every bit as dirty as it sounds”

The waste incineration industry doesn’t care much about who won in 2020 – they will continue making outrageous claims, targeting the decisions of both Republicans and Democrats, that dangerously cloud this already difficult decision-making process by hiding the significant environmental, health and economic downsides of burning garbage.

Burning garbage emits 1.5 times as much carbon dioxide per kilowatt-hour generated as coal and three times as much as natural gas.

Managing materials through recycling, composting and landfilling – store large portions of carbon for many years. Any carbon they do release, even as methane, is emitted slowly over decades.

WTE is also more expensive than landfilling, even without taking into consideration the climate, human health and ecosystem health costs. WTE capital costs per kWh are in the same range as advanced nuclear and more than double the capital costs for onshore wind or fixed solar photovoltaic.

Garbage incineration is inefficient and survives because of access to subsidies.

In spite of these facts, some states, including Minnesota, consider burning trash as a renewable energy source. This gives incinerators access to taxpayer subsidies, which otherwise could fund clean sources of power like wind and solar rather than contribute to the profitability of this polluting industry.

“Trash incineration is the ultimate wolf in sheep’s clothing. The industry markets itself as a clean, efficient and safe option – but in reality it is the most dirty, uneconomical and dangerous choice a community can make about their waste disposal.”

Some background: Carroll County officials struggled for several years to build a garbage incinerator.  Research by citizen groups revealed to the newly elected officials and the public that the contracts for the project were deeply prejudicial to the interests of the county and put the county at grave financial risk defeated them. It turns out the County Commissioners who approved the project had not even read the details. The new County officials paid attention to their constituents and terminated their involvement in the project at the cost of $1 million.

It has been 7 years since that decision and the solid waste challenges have not abated. But no action seems to have been taken even as surrounding jurisdictions plan and invest in composting, unit pricing for garbage collection and other steps toward Zero Waste.

Holstein reminds Carroll County that the decision to abandon garbage incineration is still valid and points to solutions through Zero Waste policies.

Anti Incineration Update From ILSR’s Waste to Wealth Initiative For March and April, 2021 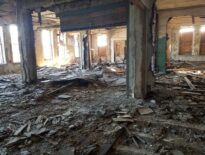 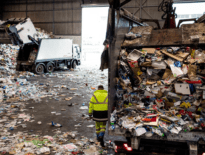 waste - recycling Commentary from Neil Seldman in Waste360: “U…
Sign Up for Composting and Zero Waste News