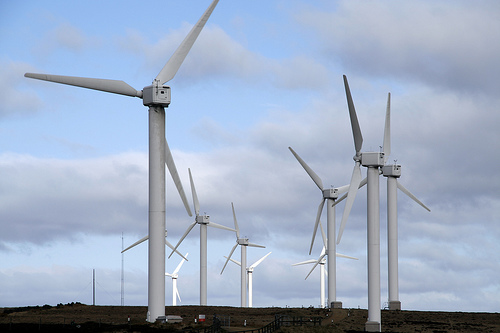 Energy and Environment News has a very long story on a new angle for the federal wind tax credit debate: a phaseout. This article raises several issues, apart from that policy strategy, that are worth a quick discussion.

1. Why Would Wind Compete with Natural Gas?

The article waxes long about the trials of the wind industry in the face of low natural gas prices, implying that utilities choose new natural gas power plants over wind power on the basis of price. I’m a bit skeptical.

Wind power is inflexible, meaning utilities have to take the power whenever the wind blows. Natural gas power plants have typically been flexible, used to provide peaking power to meet rapid changes in electricity demand. From the perspective of adding new power supply, the two aren’t competitors.

Or am I mistaken? Are there are a lot of utilities choosing to add new natural gas power plants as baseload/inflexible power that would otherwise have chosen wind power?

2. Are We Really Basing 20- to 40-year Electricity Prices from Natural Gas on Today’s Gas Price?

The article notes that natural gas power plants have a current levelized cost of $45-55 per Megawatt-hour, compared to $60-90 for wind projects that do not receive the federal tax credit (based on the quality of the wind resource). Since this is much less than estimates made last year, when gas prices were higher, one can only assume that the estimators believe that gas prices will remain forever low.

3. Why Would the Tax Credit Matter?

Most wind power in the U.S. has been either installed in states or the environmental attributes (renewable energy credits) sold to states with renewable energy mandates. Thus, the wind tax credit isn’t really the market-driver, but instead is transfer payment from federal taxpayers to electricity ratepayers in those states. Utilities in Minnesota, with a mandate for 25% renewable energy by 2025, for example, will have to meet that goal whether or not the contract for wind power costs 11 cents (without any federal subsidies) or 7 cents (with the credit and accelerated depreciation). Utilities in Iowa get to buy wind power very cheap, because the low-cost wind projects in that state use the federal tax incentives and then sell their renewable credits in neighboring states (e.g. Illinois).

I can think of a few reasons that the tax credit still matters:

If it’s the first, then the tax credit is going to slow the wind industry. If it’s the second, it’s largely a short-term problem. If it’s the third, it won’t really affect new projects so much as it will punish developers who chose to gamble on the longevity of the credit.

4. Could an Expiring/Phasing Out Credit Be a Good Thing? 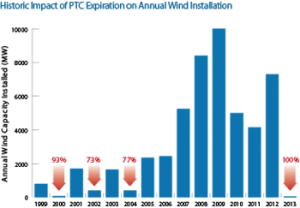 In the short term, it will be bad for the industry, as illustrated by history in the adjacent chart from AWEA. But in the long run wind power will get cheaper and natural gas – a finite resource – will not. And one of the big logjams for renewable energy projects right now is an inability to actually use the federal tax incentive.

That’s because a lot of developers don’t carry the tax liability necessary to offset their power generation, and the list of big corporations that do is relatively short, giving them a lot of market power. In fact, in exchange for partnerships with wind projects to access the federal tax credits, these companies routinely get rates of return from 10% up to 49%. (I discuss this issue in more detail here).

The tax credit has also created an environment where community-based wind power, with its multiplier to jobs and economic benefits (and political benefits), has an uphill struggle to compete. (There’s a great counter-example of a wind farm in South Dakota with 600 local owners made possible by the cash grant in lieu of the tax credit. I’ve also discussed how low-cost financing could allow solar developers to opt out of the federal tax credit and still lower the cost of solar energy by 25%).

If there’s no tax credit, however, there’s no high-priced tax equity market or artificial barrier to local ownership. And both of these changes may benefit the industry in the long run.

Phase-Out of the Federal Wind Tax Credit a Good Thing? 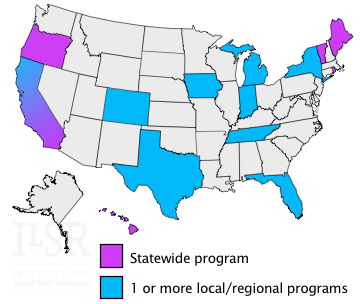 Energy Report: U.S. CLEAN Programs – Where Are We N…
Sign Up For Energy Democracy News