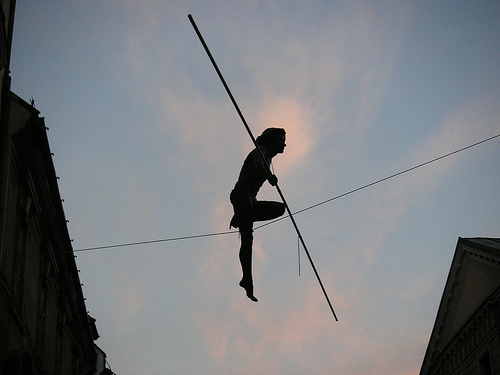 In the next two years, the U.S. may get a lot less solar and wind power than it could.

It’s not a shortage of solar panels or the cost of turbines.  Rather, it’s a problem of the perverse nature of federal incentives for renewable energy.  Right now, the owner of a solar or wind energy project can get a federal tax credit based on the value of the project or the electricity it produces.  But many owners don’t have enough tax liability to make use of the entire credit, and their search for a “tax equity” partner has created a logjam in the renewable energy market.

As reported in Greentechmedia,

The following graphic (from the article) illustrates: 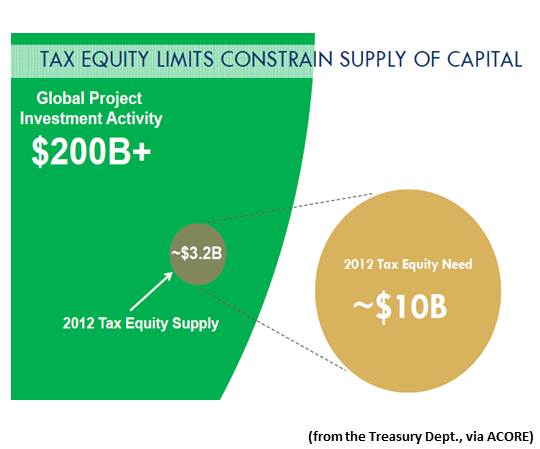 A big part of this big money problem is a focus on big projects (and technologies that can’t economically be done at small scale):

That’s a small-scale solution to a big problem.  There may be a handful more folks who can invest $500 million than $2 billion.

But there are millions more Americans who could invest a few thousand dollars in community-based solar and wind power.  In 2009, American taxpayers cumulatively paid $865 billion in federal income taxes.  If just 1 in 100 could invest in a renewable energy project, it would nearly quadruple the tax equity market (from $3.2 billion to ~$12 billion).  And since 1 in 3 Americans will be able to get electricity from rooftop solar for less than their utility provides in the next decade, policy makers should find a way to open the small investor floodgates

The answer is community-based solar and wind projects, for three reasons:

But there are three policy solutions needed to enable community power:

Some of these policy solutions are already in play.  As many as eight states already offer community net metering.  The federal 1603 cash grant (now expired) was one of the best tools for community-based projects (like this one); President Obama has proposed another solution.

The U.S. could spend the next few years letting wind and solar power development lag because of artificial financing constraints.  Or policy makers could use two or three carefully crafted tools to open the floodgates to a massively democratic investment in local, clean energy.

Energy Who Has the Most Cost-Effective Solar Feed-in Tari… 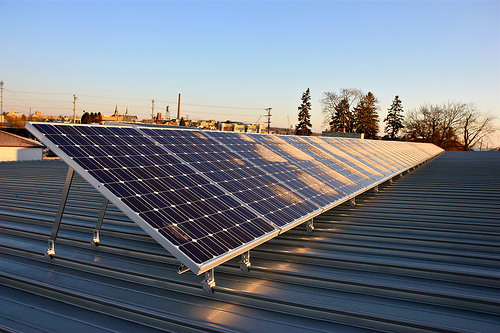