Opinion in Waste Dive: “EPR in the US Can’t Directly Follow the European Model; It Must Avoid a Producer Monopoly”

The Ellen MacArthur Foundation statement on extended producer responsibility (EPR), describing the system as “a necessary part of the solution to packaging waste and pollution,” expresses the keen desire to solve perhaps the most important aspect of contemporary municipal solid waste management. These are complex problems with complex solutions.

In Europe, EPR is an EU-wide mandate attempting to harmonize existing, longstanding national laws, institutions and culture. We should applaud these efforts from government and industry to resolve the issue of producer responsibility for the costs of recycling and wasting and build on the worthy experiment of the European Union.

But, is the thinking and activity in Europe applicable to the U.S.? Does it inform us?

Europe and the U.S. live in different recycling and wasting landscapes. Lack of space requires that Europeans live in close proximity to incinerators. This is not the case in the spacious U.S. Locally organized citizens in the U.S. have defeated plans for more than 400 incinerators and are effectively forcing existing garbage incinerators to close. The U.S. anti-incineration movement faces new challenges with the introduction of plans to burn waste in cement kilns and burn plastics in gasification/pyrolysis plants.

In Europe, container deposits — or bottle bills — are the foundation of EPR. There are quotas for refillable containers and incentives for companies that switch to refillable containers. In the U.S., bottle bills have been the declared enemy of the beverage industry, the group which leads the lobbying for EPR, for 60 years — since Big Soda externalized the cost of refilling bottles on to the U.S. public. These companies frantically opposed new bottle bills and work to repeal existing ones with religious fervor. Consumer purchasing preferences have now forced U.S. packaging companies to pledge to have zero waste packaging (recyclable, compostable or reusable) by 2030, as touted in the recent TV ads by companies, such as the greenwashing Every Bottle Back campaign. Big Soda may soon change its policy, as “private bottle bills” under the control of producers could capture hundreds of millions of dollars through unredeemed deposits, as in Oregon and Connecticut.

In Europe, industry control through EPR reverses the theory of EPR. The “polluter pays” principle becomes a producer control policy. In the U.S. it is seen as a hostile takeover of a vibrant and vital decentralized reduce, recycle, reuse and compost system.

In Europe, the political culture and recycling and wasting policies come from the top down. In the U.S., the agitation for recycling and waste reduction comes from the grassroots, where citizens can impact local government through lobbying and elections. The bottom-up recycling system in the U.S. brought recycling from 5% in the 1960s to 35% by the early 2000s, resulting in an industry with 56,000 companies and 750,000 workers with over $300 billion in wages.

The Ellen MacArthur Foundation statement, based on the foundation’s Global Commitment 2020 Progress Report, maintains that EPR is the “only proven” pathway and “necessary” to manage recycling. With cities and small towns in the U.S. reaching rates of 50%, 60%, 70% and higher using methods available to any jurisdiction, the statement is counterintuitive.

U.S. states, cities and counties have used waste surcharges and service fees to capitalize infrastructure. Newly proposed packaging taxes can focus on hybrid packages, especially hybrid plastic packaging, to further address elimination of this noxious material in our lives. Industry investment in polypropylene and film plastic recycling is burgeoning. Investment in secondary paper manufacturing is soaring, as is investment in electronic scrap reuse. Yet another source of renewable capital for infrastructure is the Maine EPR bill, which focuses on reimbursement of expenses for local governments to manage recycling and wasting and for expanding and deepening existing infrastructure needs. In addition, the Recycling Is Infrastructure Too campaign initiated by Zero Waste USA, National Recycling Coalition and the ILSR calls for embedding recycling infrastructure investments in the jobs, infrastructure and environmental bills before Congress. State “right to repair” laws are drawing investment in small repair businesses and skills-training institutions in anticipation of thousands more jobs in this sector.

Ample revenue for infrastructure investment is available through municipal reimbursement EPR, which is the settled policy position reached by the NRC, GAIA, Sierra Club, Zero Waste USA and the Save the Albatross Coalition after years of debate. Chaz Miller, veteran industry solid waste analyst, says no to ‘monopoly EPR’: “A national EPR policy group will have unheard-of power over recycling … something none of us in the U.S. want.”

Both California and Washington State in 2021 rejected good recycling legislation fearing the EPR provisions that gave too much power to industry.

Because the issues are so different in the U.S. than Europe, the statement from the MacArthur Foundation does not inform us. Much better help in thinking through the EPR issue are webinars such as the Product Stewardship Institute’s June 17 webinar, featuring presentations from Maryland, Vermont and New York, which explained decision-making in each unique circumstance. With follow-up discussions, we understand the logic for a producer control bill in rural Vermont, as there are no counties and local government does not provide waste management services. Hence, the orientation is to have an industry-controlled system. In neighboring Maine, also a predominantly rural state, local government does provide services, so that bill, now law, calls for municipal reimbursement.

These discussions are crucial. The country is alive with debate over how to proceed — whether to go with producer EPR, reimbursement EPR or no EPR and rely on traditional measures that overcome Big Soda and Big Waste barriers. The issues are far from settled. For example, the Maine law has options for producer control, still to be determined by the rule-making process. In Vermont’s producer control bill, state officials are pondering fundamental questions: If Burlington, Vermont, which now uses single stream, decides to revert to dual stream, will the producer control system allow it? The markets are drawing cities to this decision. In New Jersey, dual-stream processing is one-third less, or $30 to $40 less per ton, than single-stream processing. The New Jersey State Market Development Commission is examining single stream vs. dual stream and associated economics, which will inform local governments.

Similarly, if a producer control bill in California passes, will cities and counties be able to sue industry for beach litter cleanup and to force packagers to ‘tether the cap’ to bottles to protect beachgoers and keep plastic from lakes and seas?

The healthy debate at the state and local level is threatened by the Break Free From Plastic Pollution (BFFPP) bill, which would cut off debate and impose a uniform system based on a federal structure of governance. It would preempt the vital and vibrant debate stimulating thinking through the country. Better to drop EPR from the BFFPP bill; pass its critically needed clauses on plastic moratorium, ban on single-use plastic, national bottle bill, and emphasis on racial and environmental justice; and let the debate now coursing through the U.S. body politic to continue for the next few years to allow states and their jurisdictions to create an encyclopedia of ideas and practices to consider as we solve the plastics and global warming crises.

In fact, continued discussion on the nature of EPR could help solve the plastic crisis. The BFFPP bill has EPR controlling all recycling, yet the focus of the bill is plastics. Plastics has a 9% recycling rate and requires different approaches than paper recycling, whose rate is already over 60%.

Congress should strip EPR from the BFFPP bill and pass the remaining important features. Wait to see what the next few years bring with state-level EPR efforts. Congress should immediately focus on infrastructure support. Federal action could also boost the value of secondary materials in the economy through a carbon tax, which increases the value of secondary materials with embedded labor and energy and extraction costs. Additionally, the U.S. government should provide matching grants to states that implement surcharges on waste disposed of in landfills and incinerators with dedicated funds for recycling infrastructure investments.

Supporters of producer control EPR “Have failed to consider the consequences of their program,” longtime activist Alan Muller of Green Delaware said in a correspondence years ago.

In the U.S., recycling is storming back from the debacle of the loss of the China market in 2018 caused by decades of single-stream recycling. Private and public investment is flowing, new rules are being passed at the local level, and we are at the cusp of federal support needed since the Resource Conservation and Recovery Act became law in 1976.

Federal producer control EPR legislation will cut off bottom-up progress and put the control in the hands of the packaging industry — an industry which has been content with mediocre recycling for two decades and whose current investment plans will extend sloppy recycling methods at great cost of high-tech separation equipment. The U.S. can do much better by reverting back to its origins in citizen agitation and local control.

In Waste Dive, ILSR Argues That the U.S. Can’t Directly Follow the European Model of EPR 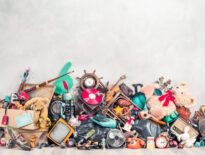 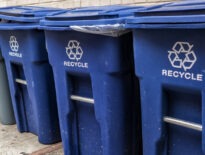