Nearly 100 people participated in the “ReBuilding Communities Through DeConstruction Enterprises” conference. Co-sponsored by the Institute for Local Self-Reliance (ILSR) and the Connecticut Institute of Municipal Studies, Inc. (CIMS), the event was held in the State Capitol Building in Hartford, CT. Participants from 18 states and 47 cities included deconstruction workers and companies, equipment manufacturers, wood brokers and processors, community development organizations, union and housing authority officials, and local and federal officials. The Honorable Jessie Stratton, Chair of the Environment Committee of the Connecticut General Assembly, served as the host and set the tone for the conference with her keynote address.

In addition to outlining state-of-the-art deconstruction techniques and technologies, the conference provided a forum to establish working relationships among community groups, small businesses, and government development agencies. “Our goal was to educate key players about deconstruction as an environmental and economic development tool, but we also wanted to make connections between these individuals and groups, to help get new projects started,” said Neil Seldman, ILSR President and one of the conference coordinators. “The bottom line is that deconstruction is creating opportunity and wealth in low-income areas around the country. It’s saving money, it’s generating money, and it’s changing the way we look at materials – taking a major industry like C&D from consumption to recovery. This conference was a way to get the word out, so that more communities can bring these benefits home to their citizens.”

ILSR Deconstruction Training Manager Jim Primdahl said that six new projects are being planned as a result of the conference. “We’re launching full-scale projects, including deconstruction services and materials resale operations,” he said. “That’s what’s so exciting about deconstruction – it creates jobs not just in the construction fields, but in sales, marketing, and management. There are opportunities for everyone.” Matt McKinney, Deconstruction Manager at ReCycle North in Burlington, VT, which assisted ILSR in deconstruction training at Stanton Dwellings in Southeast Washington, DC, is now assisting the Pioneer Valley Project, based in Springfield, MA, to develop their own capacity for a deconstructing businesses

Workers recruited from public housing, as well as union and housing officials, offered insights into the impact of deconstruction on communities and residents. John Wardlaw, Director of the Hartford Housing Authority (HHA), spoke about the Family Reunification Program he launched following the Million Man March. Under this program, public housing residents signed contracts with the HHA, agreeing to take financial and parental responsibility for their children in exchange for training and placement in family-wage jobs. “When Neil [Seldman] came to me to discuss deconstruction, I knew it would be a great fit with our program.” Victor Rush, President of the Hartford Community Construction Company (HCCC) and Director of Human Services for the HHA, explained how the Hartford Construction Company was formed by recruiting local, low-income residents. Training for the project was provided by Pavitra Crimmel, owner of Beyond Waste, an independent deconstruction company based in Cotati, CA,the International Laborers’ Union, and ILSR. HHA, the workers, and Manafort Brothers, Inc., a local construction and demolition company, then formed a joint-venture partnership. CIMS President, Nick Carbone, outlined the benefits of this corporate structure: “By creating a joint-venture, HCCC gained access to insurance, equipment, loans, and contacts – and the workers were able to get additional training in the construction trades. When the workers aren’t working under their own company name, they are unionized employees of Manafort. And with Manafort providing guidance and mentoring, HCCC has time to establish itself in the industry before breaking off on its own.” The company already has $1 million in machinery, rolling stock, a warehouse, and has $750,000 in current contracts. Modesto Rey, Construction Manager for Manafort Brothers, stressed the need “to live outside the box, as well as think outside the box” when dealing with the deconstruction concept. Foreman Ray Ramos spoke about the impact on his life. “I am taking care of my family – with a paycheck, with health insurance, and with a new home.” Charles Tisdale, Executive Director of ABCD, Inc., helped arrange pre-approved mortgages for the workers. This Spring, Ramos and other workers will buy new homes built on the site they deconstructed during their training program.

Deconstruction workers DeFonties Broome and Jamal Harris, Site Supervisor and Safety Facilitator, respectively, from Henson Ridge Works in Washington, DC, discussed the impacts of deconstruction on residents and workers. “I am not only a deconstructionist now, I’m an environmentalist,” pointed out Harris. “I never believed that I could survive and prosper in my neighborhood by selling legal materials instead of drugs,” said one worker, who also described a recent visit to the site by members of the Metropolitan Police Department. “The cruisers stopped at our site, put on their sirens to get our attention, and then the officers started applauding the workers and our work.I couldn’t believe that 48 black men and women didn’t run away when they heard the sirens. Deconstruction has changed all of that for us.” The Stanton Dwellings site is the largest single deconstruction project in the United States, encompassing 348 units in 87 buildings and employing residents of the very public housing complex they are deconstructing. The project was launched by ILSR and the DC Housing Authority (DCHA), under DCHA’s HOPE VI grant from the U.S. Department of Housing and Urban Development.” Bob Cook, Training Director at the Sheet Metal Workers’ Local Union #38, presented on the “Community Union Hall” created in Bridgeport, CT, in cooperation with ABCD. To date, 26 workers have been placed in union jobs. Donna McDaniel, Program Administrator at the Laborers’ International Union of North America, explained the training opportunities available for people working with hazardous material, lead, and asbestos abatement.

Equipment manufacturers and technology developing firms were also present. A denailing gun called the “Nail Kicker” was demonstrated by the company RECONNX. This equipment cuts by 2/3 the time required to denail recovered wood, and has proven a valuable asset at the Stanton Dwellings project, which has eight of the denailing guns. The psychological impact of the air guns has also been an important factor. “We know that we are being trained with the latest, most efficient equipment in the field today, stated Broome.

Stanley Eller, of Auburn Machinery, Inc. (Lewiston, ME), presented new technologies for manufacturing new products from pallet and other scrap urban wood. Forrest Charnock, of C&C Recycled Hardwoods, a broker and manufacturer of recovered wood, provided a riveting discussion and dialogue on sales and technology, and demonstrated how to separate tongue and groove flooring quickly without damaging the product. Even more intriguing was his description of how to recover flooring in large buildings, such as gymnasiums, using a small CAT instead of the commonly used wedge tools. Charnock also provided pricing guidelines for different types of wood and wood products, offering essential insights into the used wood markets in the U.S.

Janet Meister, Program Director of the ReUse Center/DeConstruction Services at The Green Institute (Minneapolis, MN), Teresa Lemmons, Director of the Center for Economic Opportunity at the Metropolitan Development Counsel (Tacoma, WA), and Leslie Kirkland, Executive Director of The Loading Dock, Inc. (Baltimore, MD), focused on an array of issues including inventory controls, sales procedures, safety, insurance, “selling the harvest,” and how to spot and take advantage of business opportunities. Dick Saul, in the Office of Community Services at HHS, described a variety of sources of grants. Saul’s agency has provided more grants to deconstruction programs than any other federal agency.

Stephen Cosper and Tom Napier, of CERL in the U.S. Army Corps of Engineers, and Robert Falk, of USDA Forest Products Laboratory, provided a similar run down of the deconstruction of military facilities. This group offers assistance to deconstruction companies and non-profit programs in initiating dialogue with the appropriate base officials. Seldman provided a discussion of private and public sources of capital and joint-venture models to fit a variety of military, residential, and commercial buildings.

Rick Anthony, of the GrassRoots Recycling Network, moderated several panels and helped place deconstruction activities in the context of the new international zero waste movement. Bert Ball, of L.A. Shares, provided strategic feedback to the participants on marketing and cooperation with industry donors of excess materials. 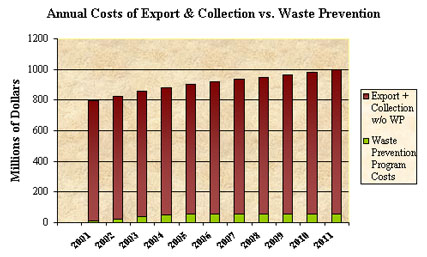