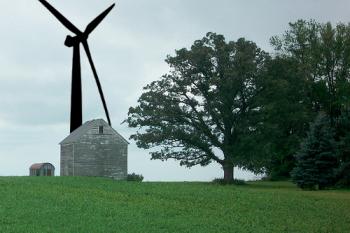 Goodhue Wind was first envisioned as a “community wind” project by National Wind in 2008 as a 78 megawatt (MW) wind power plant providing enough power for approximately 25,000 homes.  Under its  development model, National Wind looks for local landowners to become shareholders in their projects in order to build public support.

Residents of Goodhue County, MN, have not been supportive and the evidence suggests that they may be right about the lack of community in the Goodhue Wind “community wind” project.  Instead of coming on board, residents have instead spent the past two years stalling the project’s development.

The crux of the issue is Minnesota’s unique Community-Based Energy Development (C-BED) statute.  It requires utilities to offer a preferential tariff (price) to wind power projects that are owned by Minnesotans and if a majority of the power purchase agreement revenue flows to “local entities.”   The law was conceived as a way to help encourage the development of community wind projects that maximize local economic benefits, much like Minnesota’s ethanol producer payment led to the development of several farmer-owned renewable fuel facilities.

Unfortunately, the success of C-BED is all in the definition.  Although the state’s Public Utility Commission accepted National Wind’s application for C-BED certification, the evidence suggests there’s little chance of the project delivering many community benefits.  The Goodhue Wind project has 20 local investors (pdf), but they only control about 1% of the company, with the remainder held by various subsidiaries of T. Boone Pickens’ energy empire, notably not a Minnesota owner.

Despite this dubious arrangement, the Commission ignored warnings from the state’s Office of Energy Security about the shaky C-BED standing of Goodhue Wind and its stark assertion that without C-BED status, the project was not a good use of ratepayer funds.

The heart of the problem was exposed in a commentary written by three Republican state legislators for the state’s largest newspaper:

We have a duty to protect our citizens from out-of-state corporations taking advantage of local resources. Doing so will ensure that the additional dollars paid by Minnesota ratepayers for C-BED energy will remain in our communities.

State legislators and local residents are right to be concerned, given the economic impact at stake. 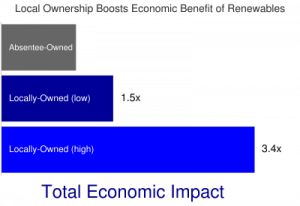 The National Renewable Energy Laboratory reports that locally owned wind projects increase the economic impact of a wind project by 1.5 to 3.4 times and double the number of local jobs.  With a generic wind power project generating $1 million in economic activity per megawatt, it’s no surprise that residents of Goodhue County are looking at the tens of millions lost to their community when a project lacks local ownership.

The political implications – all too clear in Goodhue – should also be considered.  The following chart illustrates the difference in support for more local wind power as reported by a survey conducted in two German towns with existing wind power projects.  In one town the project was not locally owned, and on the other it was.  Resistance dropped by 45 percentage points with local ownership! 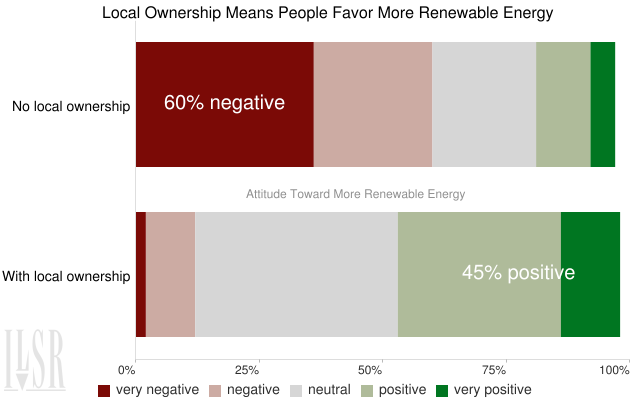 Goodhue wind provides two lessons for wind developers and wind energy.  Crafting policy to support local ownership may be a crucial step if renewable energy will play a major role in transforming the electricity system to clean energy.  And when such policy is enacted, it had better make sure that “community wind” isn’t just a legal masquerade.