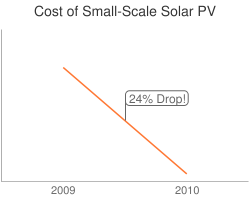 Update: It’s important to note that this refers to the net installed cost.  In other words, the installed cost dropped because residential solar customers were now getting an uncapped federal tax credit.

We wrote in this 2009 report about the perverse problems created by the $2,000 cap on the federal residential solar tax credit.  The uncapping of the credit in the 2009 stimulus package had a significant impact:

An obscure provision in the stimulus act has led to a dramatic decline in the cost of small-scale solar power installations, according to researchers at Lawrence Berkeley National Laboratory.

According to the report (warning: HUGE PDF), a key factor pushing down solar costs was the removal of a $2,000 cap on federal investment tax credits for installations. The provision, part of the American Recovery and Reinvestment Act, led to a 24% decline in the average net installed cost for residential solar systems.

Not only did the price fall sharply, but:  The price fell as residential installations now enjoyed tax credit parity with commercial ones.  But there was one interesting additional tidbit:

Energy A Blueprint for a 100% Renewable Utah
Energy Michigan the 24th State with a PACE Law, Will It M…