“Despite an enormous commitment of public funding to support retail development, neither taxable sales nor retail employment has grown significantly region wide,” concludes a new report by the East-West Gateway Council of Governments, a metropolitan planning and problem-solving organization governed by top officials from the region’s seven counties and the city of St. Louis.

The report also concludes that development incentives have done nothing to boost tax revenue in the metro and “the overall fiscal health of local governments in the region is increasingly tenuous.”

The study, ” An Assessment of the Effectiveness and Fiscal Impacts of the Use of Local Development Incentives in the St. Louis Region,” documents 15 years’ worth of public investment in the form of forgone tax revenue from tax increment financing (TIF) and special development districts.

Between 1993 and 2007, the study estimates that these two programs alone cost taxpayers $2.5 billion. About 80 percent of this was directed to retail development, including many large shopping centers filled with chain stores and located in affluent suburbs.

Although TIF and other development incentives were intended to be tools for revitalizing blighted, low-income urban neighborhoods, in the St. Louis metro, as well as other regions of the country, these programs have more often funded suburban sprawl and “exacerbated already significant economic disparities between communities.”

For their $2.5 billion in incentives, the region’s taxpayers have done little more than help move retail activity from older urban areas to richer suburbs, the study found. Retail sales per capita for the metro region have been flat or declining for the past 15 years.

Nor have the subsidies produced significant job gains. Although TIF-financed big-box stores and shopping centers created 32,550 new retail jobs, some 27,150 retail jobs were lost at existing businesses, resulting in a net gain of only 5,400 jobs. That works out to a public cost of $370,370 per job created — a staggering figure considering that the average retail job pays $18,000 per year.

The competition for retail sales in the region has left more communities losers (losing taxable sales to surrounding areas) than winners, according to the study. Moreover, the winning suburbs often do not remain dominant for long. “The distribution of winners and losers changes over time, often corresponding to the use of development incentives in a particular area to attract retail growth,” the study concludes.

The study identifies the loose definition of “blight” as a main cause for the excessive amount of TIF subsidies going to new suburban retail development. Local officials need only prove that a new shopping center would lead to more tax revenue, not that the area is truly distressed.

The study also found that relatively little accountability comes with these massive giveaways. Because of lenient reporting requirements, it is impossible for citizens and local governments to monitor whether incentives are actually producing economic benefits or to demand refunds in the event that promised jobs do not materialize.

Supporters of legislation that would reform Missouri’s TIF program hope that this new analysis will give their efforts a boost.

Years of Subsidizing Retail and Nothing to Show for It 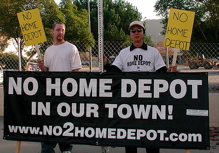