This fall, Minnesota’s largest investor-owned utility Xcel Energy submitted its annual calculations for a 2019 “Value of Solar.” A Minnesota law passed in 2013 required that the utility calculate the value of energy produced by solar to itself, its customers, and society. The state’s Department of Commerce developed the formula, including benefits such as zero-risk fuel prices, avoided energy purchases, and avoided pollution. We wrote a primer about this model in a 2014 report: Minnesota’s Value of Solar. Since January 2018, the Value of Solar is the official price for energy produced by community solar projects.

In response to Xcel’s 2019 filing, we submitted comments to the Minnesota Public Utilities Commission raising concerns with several elements in the calculations..

Our comments, submitted by ILSR and jointly filed with co-signers Community Power and Cooperative Energy Futures on November 16, 2018, detail issues with Xcel’s Value of Solar calculation that could have large implications for Minnesota’s community solar program and other solar developments, as well.

We highlight several specific areas of concern in the calculation, from the photovoltaic (PV) production values and use of a location factor to the company’s fuel price estimates that distort and overly simplify the value calculation by relying heavily on volatile natural gas projections.

We point out ways to improve Xcel’s calculations to more closely align with the intent of the state’s community solar legislation. Adjustments to these calculations would ensure solar developers could more effectively plan for future projects, secure the capital required, and extend the reach of community solar gardens to the greatest number of possible subscribers.

Minnesota’s Public Utilities Commission has invited comments this year on topics ranging from the state’s community solar program, including a residential adder that supports solar garden development and affordable residential access to the adopted Value of Solar Rate and grid modernization.

See these and other comments submitted by our team and allies in our Public Utilities Commission docket submission annual archives: 2018 | 2017 | 2016.

In its letter approving the calculation, the Department of Commerce noted that Xcel replaced the longstanding estimate of solar project with the actual generation from 39 facilities for a single calendar year. This change does not follow the defined VOS methodology for calculating solar fleet production listed on pages 13-16 of the approved Value of Solar Methodology developed by the Minnesota Department of Commerce Division of Energy Resources on April 1, 2014.

Xcel’s proposed process of evaluating only 39 existing solar gardens complies with none of these methods.

Our concern is that community solar projects are not the only potential application for the value of solar, nor are community solar projects using uniform technology, e.g. tracking versus fixed-tilt panels. It was unclear from Xcel’s explanation of the actual fleet data if there was a distinction made by technology used. If actual data is to be used, then the VOS calculation should validate whether this change has an adverse impact on projects with fixed-tilt panels.

Although the Department is technically correct that the result of applying the methodology as read results in a zero value for this component of the value of solar, we believe such a perverse result requires revisiting how this component is calculated. The value of avoided capacity isn’t just in avoiding an increase in aggregate system demand, but also in reducing that demand such that capacity replacements could be smaller than without them. In other words, grid-connected distributed solar continues to have a demand reduction benefit, but the methodology no longer values it. This violates the statutory intent to accurately price the value of solar.

In every year since the 2015 filing, the assumed rate of increase in the years beyond contract availability have been falling. It appears that the problem may lie in the VOS Methodology (page 7) that indicates the use of the Consumer Price Index for the calculation. 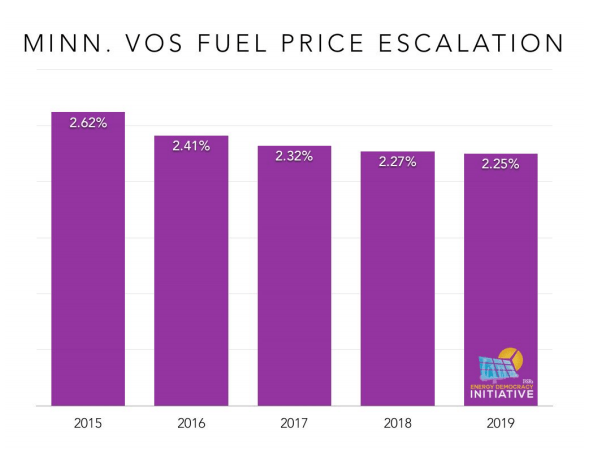 We are concerned with this method because the history of natural gas prices suggests it may be overly simplistic. Within the last decade, natural gas prices were almost 6 times today’s prices, and fluctuations have often been sudden and severe. (Chart below from MacroTrends).

There are at least two pieces of additional evidence to suggest that smoothly rising curves are a poor projection of natural gas price risk. For one, numerous electric utilities are in a virtual stampede to build new natural gas capacity, with nearly 20 gigawatts planned for 2018 alone. This surging demand is likely to impact prices, and certainly undermines the idea of a declining escalator. Additionally, some analysts have examined the financial data of the fracking industry and found worrying signs of a financial bubble.

Interested in following future updates on regulatory action from our Energy Democracy Initiative? We post our latest 2018 docket activity here. 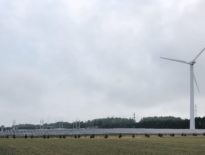