In August 2018, the Minnesota Public Utilities Commission (PUC) ordered utility Xcel Energy (Northern States Power) to file an annual Integrated Distribution Plan. This plan was to be a detailed report on the utility’s distribution network and how the utility will adapt to a changing energy landscape.

As new technologies develop and the prices for them drop, more utility customers are turning to distributed energy resources (like rooftop solar and energy storage). In Minnesota, utility regulators have prioritized these resources and have incentivized them through policies like the community solar program. Requiring Xcel Energy to file the Integrated Distribution Plan complements existing programs and ensures that customers have access to a dependable grid, even as more distributed generation comes online.

On November 1, 2019, Xcel Energy filed its second annual Integrated Distribution Plan. As the Minnesota PUC serves in the public interest, the commission holds a comment period for stakeholders. John Farrell, Director of the Energy Democracy initiative, submitted comments on behalf of ILSR during the extended reply comment period.

In its comments, ILSR seconds many of the comments made by the Citizens Utility Board, the City of Minneapolis, the Environmental Law and Policy Center, the Interstate Renewable Energy Council, Vote Solar, and Xcel Large Industrials.

Read the full comments, submitted to the Minnesota Public Utilities Commission on April 10th, below.

Short Shrift Given to the Non-Wires Analysis

As noted by several commenters, non-wires projects provide significant opportunities to reduce infrastructure and system costs (as well as return on equity for Xcel shareholders). However, we support several commenters in illustrating necessary improvements to the analysis proposed by Xcel:

Room to Improve the Cost-Benefit Analysis

Fresh Energy illustrates several potential shortcomings in Xcel’s cost-benefit analysis, including: lack of clarity in a sharply increased budget for projects for System Expansion or Upgrades, potentially overstated benefits in the utility’s Fault Location, Isolation, and Service Restoration analysis, and a lack of commitment to a minimum benefit for customers from the Integrated Volt-Var Optimization. All of these holes should be filled in before the Commission approves this plan.

ILSR supports several commenters (Fresh Energy, the City of Minneapolis, and Citizens Utility Board) in backing minimum standards for customer and third party data access. Citizens Utility Board, in particular, notes that the utility’s own cost-benefit ratio for certain components is less than one. The utility needs customers to help prove the value of its distribution system improvements.

More importantly, however, Xcel Energy is a public utility, with a right to captive customers only insofar as it serves the public interest. If advanced metering infrastructure creates market opportunities for customers to cut their energy costs, then the Commission should require Xcel to maximize the customer opportunity to do so. ILSR strongly supports the requirements laid out by Citizens Utility Board, especially the requirements and deadlines for customer data access.

The City of Minneapolis, Fresh Energy, Citizens Utility Board, and Xcel Large Industrials all raised objections to certification of at least one component of the Integrated Distribution Plan. Most commenters found that the Commission lacked clear criteria for certification, and Xcel Large Industrials explicitly notes that the Commission lacks clear statutory authority to certify projects outside of a multi-year rate case.

It seems like a minimum requirement would be for the Commission to respond to the question of statutory authority before even considering the utility’s specific request. Should the Commission find that it has the authority to consider certification, the Institute for Local Self-Reliance would add three additional concerns in its opposition to certification for all projects:

Given the poor history of cost forecasting, the uncertain cost-benefit analysis, the coincidence of postponing the multi-year rate plan, and the uncertain statutory authority, ILSR strongly recommends that the commission deny certification of the Advanced Grid Intelligence and Security Initiative and push cost recovery into the utility’s next rate case. 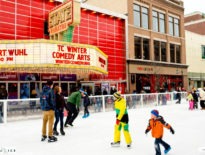