The Minnesota Public Utilities Commission has required that Xcel Energy, the largest electricity provider in Minnesota, conduct annual hosting capacity analysis reports since 2016. These reports identify where the grid can accommodate additional distributed generation capacity (including rooftop and community solar) and the results are displayed on the company’s Hosting Capacity Map. Minnesota is one of seven states that require utilities to conduct hosting capacity analysis and present their results in a map resource. The six other states requiring hosting capacity analysis are California, Connecticut, Nevada, New Jersey, New York, and Maryland.

See Xcel Energy’s hosting capacity map for Minnesota below. Parts of the grid that are constrained are marked with red lines (the area around number 1), while parts of the grid with available hosting capacity are marked with green and yellow lines (the area around number 2). Developers can look at the map and predict where they might install a solar garden. However, the map is only updated on an annual basis (number 3), making it considerably less useful for those who need an accurate depiction of grid capacity.

With significant anticipated growth in distributed solar across all states, electric grid managers need every tool possible to smooth its incorporation into the grid. For example, Minnesota’s community solar program is on track to reach one gigawatt of generation capacity as early as 2022 and ILSR predicts the development of an additional 475 megawatts of residential solar by 2034. Most of these projects won’t need high-voltage transmission lines, but instead can connect to the grid directly where customers are using power, or where there is excess capacity.

Given the proper policies and incentives, like robust hosting capacity analyses, distributed solar development can serve as a tool for economic stimulus and increased energy justice nationwide.

Xcel Energy (the Company) has been directed to complete its hosting capacity analysis in service of Xcel customers and grid stakeholders. However, ILSR feels there are three issues worth addressing in this docket: 1) Xcel slows the adoption of cost-effective distributed generation, 2) Xcel has not fulfilled the requirements outlined in the Public Utility Commission’s July 2020 Order, and 3) Xcel could do more to advance toward the ultimate goal: delivering its customers more cost-effective clean energy by integrating hosting capacity analysis with the interconnection process. The Commission should accept Xcel Energy’s 2020 Hosting Capacity Analysis Report, but we submit the following concerns about the Report and suggest additional development to advance the common goals of customers and the Commission.

Xcel Energy celebrates its reputation as a “national leader in renewable energy” with “the nation’s largest community solar program,” which gives customers “cleaner energy options and more control over their energy use.” This pride in marketing often doesn’t align with the utility’s actions. The Company’s actions can also run counter to the purpose of the hosting capacity analysis reports, as set by Minn. Stat. § 216B.2425, subdivision 8, “to support the continued development of distributed generation resources.”

For example, according to Xcel Energy’s integrated resource plan filing (Docket 19-368), future development of distributed generation resources will be meager. In Why Utilities in Minnesota and Other States Need to Plan for More Competition, ILSR found that “Xcel Energy’s forecasts for distributed solar, including customer-sited and community solar, are significantly low in light of existing trends and comparative models.” It may be easy to under-invest in a robust hosting capacity analysis if the utility (and regulators) under-count potential distributed solar development. The following charts, taken from the joint comments of ILSR and partners, illustrate the gulf between Xcel’s distributed solar forecast and ILSR’s adoption model that aligns with distributed solar deployment in several mature markets. 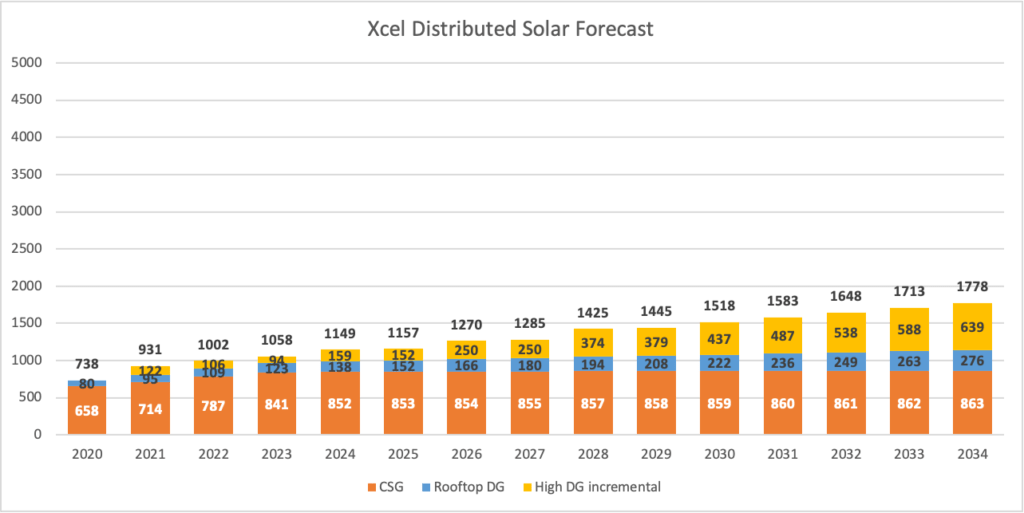 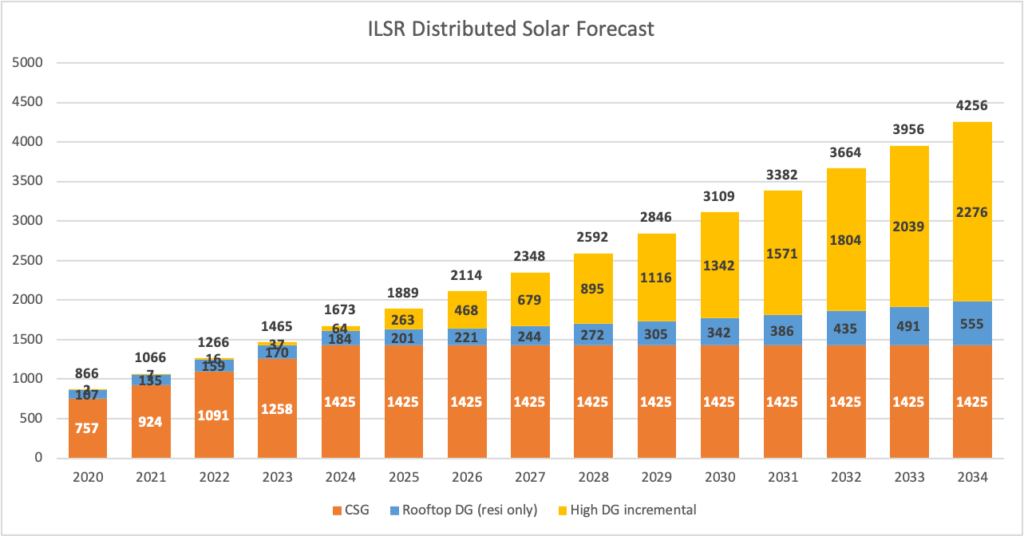 Hosting capacity analysis provides an opportunity to accommodate significant potential growth in distributed solar resources and ILSR’s solar adoption model forecasts suggest that there’s an urgency to action: within five years, distributed solar deployment could push the margins of Xcel’s hosting capacity. Xcel has stated in the HCA report that the Company is “committed to make the interconnection process work better.” ILSR asks that the Commission hold them to that with specific, time-bound deadlines.

2. Xcel has not fulfilled the requirements outlined in the Commission’s July 2020 Order.

The Commission’s July 2020 order, in response to Xcel Energy’s 2019 Hosting Capacity Analysis (HCA) Report, found that “improved and additional information will be necessary in future reports” and provided the Commission’s “direction for future HCA reports.” In this order, the Commission determined that Xcel should publish the actual locations of distribution system lines because “giving customers and developers access to more precise data would allow them to make informed decisions about whether to pursue a project before investing significant time or resources into the planning process.” Order Point 12 required Xcel Energy to do so in its 2020 Hosting Capacity Report. The provision of this data would support using hosting capacity analysis in the place of initial review screens for interconnection processing, which the Commission adopted as a long-term goal in the July 2020 order.

The Company, after being directed by the Commission to do so, has declined to provide the actual locations of distribution system lines in its 2020 hosting capacity report:

In Order Pt. 12 of the July 2020 Order, the Commission directed the Company, to the extent practicable, show the actual locations of distribution system lines instead of broad blocks of color on the HCA map. We continue to believe such an approach would risk grid security and customer privacy, confidentiality and security as described in more detail in Section III below and in attachment E. Therefore, we again provide a heat map view of available hosting capacity

To its merits, ILSR offers the following question to Xcel Energy’s refusal to follow Commission orders: as several members of the Hosting Capacity Analysis and Distribution Grid Data Security Workshop pointed out, both New York and California IOUs disclose feeder lines on their hosting capacity maps. What makes feeder locations a greater risk threat in Minnesota than in New York or California? Grid security is a vital issue, but we fear it may serve as an excuse to further delay the interconnection of distributed generation. ILSR defers further discussion on this topic to Docket No. E999/CI20-800.

3. Xcel could do more to advance toward the ultimate goal: delivering its customers more cost-effective clean energy by integrating hosting capacity analysis with the interconnection process.

Xcel petitioned to, as mentioned in the Hosting Capacity Analysis report, “allow publicly posting additional information on CSGs in the interconnection queue, including feeder name, currently expected in-service date, and indicative interconnection cost.” ILSR supports the publication of this information, as an interest in greater transparency was raised in the October 2, 2020 convening of the Distributed Generation Working Group. Supporters agreed that the Company’s participation in greater inter-developer transparency could facilitate cost-sharing in line upgrades and would be an improvement from the current cost-causer pays model. It may also speed up the interconnection process; if developers can split an upgrade charge with other projects in the queue for that same feeder, they may be less likely to withdraw their application in the final stretch. We thank the Commission for approving the November 2, 2020 Petition To Publish Certain Information about Applications in the Interconnection Queue, as we believe it will improve the interconnection process. However, the interconnection process stands to gain much more from hosting capacity analysis.

These objectives set the Commission’s intentions for hosting capacity analysis to, at the least, augment initial review screens and, at the most, totally automate interconnection studies. Xcel has since written “should the Commission determine it is in the public interest for the Company to advance and mature the HCA to be conducted more frequently and/or to integrate with the interconnection process,” the Company would refine cost and timing estimates. The Company continues to question the Commission’s intentions and displays a general lack of urgency in this matter.

ILSR asks that the Commission provide the Company more direction, in the form of deadlines to use HCA in initial or supplemental interconnection review (in the next 18-24 months) and automating at least a portion of interconnection proceedings (by 2025) as well as staff-facilitated working groups to guide implementation. California’s process to incorporate hosting capacity analysis into the interconnection process began in 2014, so we understand that this will take some time. However, if the Commission does not apply greater pressure for action, hosting capacity may continue to be a largely performative exercise without providing tangible benefits to Minnesota stakeholders and electric customers.

Beyond the pending integration into interconnection, California utilities have additional features on their hosting capacity maps that ILSR believes should be implemented in Minnesota. Southern California Edison provides one such example of a more thorough hosting capacity map that includes criteria violation values. We are glad that the Commission has asked Xcel to provide all criteria threshold violations, rather than just the primary limiting factor. We ask that the Commission require Xcel Energy to provide these violations in the HCA map pop-ups (as requested by the Commission in the July 2020 order), rather than just in the sub-feeder Tabular Results.

In summary, there are 5 things we ask of the Commission: 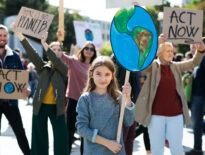 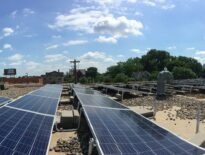