When Local Became the New Organic

We can pinpoint with some precision the date the local food movement came of age: Dec. 15, 1997. That day the United States Department of Agriculture finally issued the organic standards that Congress had said it required back in 1990. The proposed standards allowed genetically engineered crops – crops fertilized by sewage sludge and irradiated foods – to be labeled organic.

An almost spontaneous expression of outrage erupted. Within three months, with virtually no media attention to the standards and no national coordination, almost 300,000 comments flooded into the USDA. One evaluation of the first wave of comments found 83,081 opposed to the proposed standards, only 18 in favor.

In 1998, the USDA threw in the towel and went back to the drawing board.

The recognition that it had barely averted a disaster spurred the fledgling organic movement to become more proactive. State by state, hundreds of communities and tens of thousands of individuals started taking part in a national conversation about a new kind of agricultural model. They quickly realized that the traditional focus of the organic movement on the health of the soil was too constrained. What was needed was a vision of an agriculture that would nurture healthy farmers, farm workers and communities.

Industrial agriculture, with its reliance on huge production units and long-distance distribution lines and absentee ownership, became recognized as the enemy. A more localized food system connecting producers and consumers was embraced as the alternative. “What good is eating organic,” said one activist, “if it’s been trucked 3,000 gas-guzzling miles across the country?” In less than 10 years the new catchphrase had become “local is the new organic.”

In 2005, Woodbury County, Iowa, enacted an Organics Conversion Policy that requires the county to purchase locally grown organic food. In this case, local means grown and processed within 100 miles of Sioux City, Iowa. If a local source of an organic food is not available, the policy favors buying local nonorganic foods.

The old way of doing things was challenged.

For example, the value of fresh fruit and vegetables imported by the United States has nearly doubled between 2000 and 2006. One reason for that surge, as The New York Times recently reported, is that under “a little-known international treaty called the Convention on International Civil Aviation, signed in Chicago in 1944 … fuel for international travel and transport of goods, including food, is exempt from taxes levied on fuel for trucks, cars and buses. There is also no tax on fuel used by ocean freighters.”

Local food advocates are lobbying to eliminate this exemption. A sympathetic European Commission is considering imposing a freight charge on food transport, based on its environmental impact, to undermine the economic argument that “transporting freight is cheaper than producing goods locally.”

Small cattle and poultry operations have been burdened by having to use USDA-certified slaughterhouses geared to very large operations. Back in 1967, the Wholesome Meat Inspection Act and Wholesome Poultry Products Act did authorize states with inspection programs certified by the USDA as “at least equal” to the federal program to certify meat and poultry products for distribution within a state’s borders. But most state programs were abandoned in the face of USDA recalcitrance and the lack of interest in direct marketing.

Now the challenge to small producers is to be able to sell their state-inspected meat across state lines. In October 2007 an amendment to the farm bill was added to allow processing establishments with up to 25 employees to do so.

In 1988 the USDA published procurement regulations that prohibited the purchase of local foods with its school lunch and nutrition program funds. The 2002 farm bill reversed this policy, directing the USDA to “encourage” schools to purchase “locally produced foods … to the maximum extent practicable and appropriate.”

The federal government is not the only obstacle to local food production. State procurement statutes traditionally require state institutions to buy from the lowest bidder. A dozen states have passed bills relaxing food-purchasing regulations to allow schools and state-run institutions to buy fresh produce and meats from in-state farmers even if it costs a little more than their processed or canned counterparts. In March 2008, Washington State became the latest to adopt that policy.

A number of states have adopted laws pre-empting counties from regulating the size and location of large concentrations of livestock, even to protect the health of their residents. The new USDA organics standards require animals to have “access to pasture” but amazingly do not actually require the animals to graze.

A decade ago, in response to growing scientific evidence about the harmful effects of feeding the synthetic hormone, rBGH to cows, Vermont enacted a law requiring dairy producers to inform their customers whether the dairy came from rBGH-injected cows. A federal court overturned the state law. Labeling in Vermont, as in many states, is now voluntary. Yet armed with this information, consumers have opted to buy rBGH-free milk, leading to a significant decline in its use. In response, Monsanto, the manufacturer of the hormone, has launched an effort to convince state legislatures to prohibit companies from even voluntarily informing their customers about whether their products come from animals injected with this synthetic hormone.

Meanwhile, rBGH is banned in Canada, the European Union, Japan and Australia. Its use is prohibited under organic milk production standards.

As local has become the new organic, organic foods have gone global. Global food companies sell an ever-increasing portion of organic foods and source their organic ingredients from farms thousands, even tens of thousands of miles from their customers. Giant retailers like Wal-Mart have announced their intention to go organic. It is highly unlikely Wal-Mart can develop an effective localized purchasing arm.

No one ever thought restructuring a food infrastructure built over a century would be easy or rapid. But after December 15, 1997, we can say the issue has been joined.

David Morris is vice president of the Institute for Local Self-Reliance, based in Minneapolis and Washington, D.C.

When Local Became the New Organic 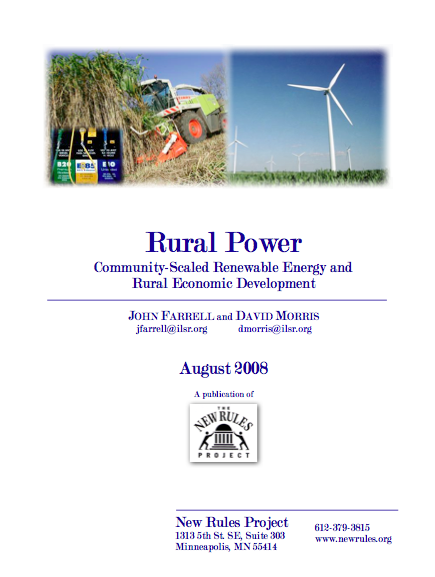