Since its passage in 2009, ferocious opposition to the Affordable Care Act (aka Obamacare)  had proven a devastatingly effective electoral strategy for Republicans. In 2010, they gained a net 63 seats and control of the House of Representatives. They gained control of 11 additional state governments, bringing their total to 25. When the ACA went into effect virtually all 25 were refusing to expand Medicaid, a decision they were permitted to make by a June 2012 Supreme Court ruling overturning the mandatory expansion provision in the law.

In October 2013, in the midst of a Republican-led government shutdown designed to stop the implementation of the ACA, I invited President Obama to embrace a bold strategy: Let the red states secede from Obamacare, under three conditions.

First, states must withdraw from all benefits. (e.g. children being able to be on parents insurance up to age 26, insurance companies no longer being allowed to deny coverage for pre-existing conditions, etc.) They couldn’t pick and choose.

Second, Congress must move forward the date states would be given great latitude in designing their own system from 2017 to 2014, thus allowing blue states to experiment with insurance systems like single payer.

Third, and most importantly for the future of the ACA and the Democratic Party, state legislatures must ask their citizens to vote directly on Obamacare.

I argued then that the downside of letting the red states secede would be modest. The red states had already decided not to expand Medicaid, dramatically restricting the ACA’s direct benefits. In Kentucky, for example, a state often viewed as a model for aggressive and competent ACA implementation, 400,000 people, 9 percent of the entire population signed up under Medicaid expansion; only 80,000 signed up for health plans through Kynect, the state exchange.

A single issue election would have allowed an engaged and focused discussion impossible in a general election. Which would have allowed a considered response to some of the Republicans most effective 20-second sound bites. For example, their insistence that the ACA established government panels that will make life and death decisions. When Republicans called them “death panels” Democrats quickly scuttled the provision, lending credence to the Republican claim that that’s what they were. Indeed, according to a recent poll by the Kaiser Family Foundation, some 41 percent of Americans continue to believe this.

In 2014 in Kentucky, as elsewhere, Obamacare was a key issue. The New York times reports that Kentuckian Amanda Mayhew enrolled in Medicaid and had been to the dentist five times to begin salvaging her neglected teeth, had visited a dermatologist to remove a mole and had received medication for her depression, all free. “I am very, very thankful that Medicaid does cover what I need done right now,” Ms. Mayhew said but pointedly added, “I don’t love Obamacare….There are things in it that scare me and that I don’t agree with…would I gladly give up my insurance today if it meant that some of the things that are in the law were not in place? Yes, I would.” She was referring to death panels.

A single-issue election would have given Democrats the opportunity to go from defense to offense. They could have explained that the provision Republicans vigorously opposed actually offered money to doctors so they could spend time with terminally ill patients discussing end of life issues. And Democrats could have used the opportunity to educate the public about the widespread need for such discussions, and their value.

In his new book, Being Mortal, physician Atul Gawande describes the results of one large-scale study about the impact of such conversations.

Two thirds of the terminal cancer patients…reported having had no discussion with their doctors about their goals for end-of-life care, despite being, on average, just four months from death. But the third who did have discussions were far less likely to undergo cardiopulmonary resuscitation or be put on a ventilator or end up in an intensive care unit…They suffered less, were physically more capable, and were better able, for a longer period, to interact with others. In addition, six months after these patients died, their family members were markedly less likely to experience persistent major depression.   In other words, people who had substantive discussions with their doctors about their end-of–life preferences were far more likely to die at peace and in control of their situation and to spare their family anguish.

In a single-issue referendum Democrats could have engaged the Republican claim that the wave of cancellations of individual health policies in 2013 was a result of Obamacare. In October 2013 the Associated Press estimated 4.8 million persons with individual coverage had their policies cancelled because of the ACA. The estimate was widely quoted. But any referendum on the ACA would have been held in mid to late 2014 by which time more realistic estimates had dramatically reduced the number of persons affected to 1.6-1.9 million persons. More importantly, they could have explained that in pre-Obamacare America most individual health policies were for one year and the normal churn rate is remarkably high. One study found that only 27 percent continued to have individual coverage after two years.

Democrats could also have responded to the almost weekly horror story issued by Republicans about dramatic price hikes in premiums under Obamacare (most of which proved untrue) by noting that health insurance companies had been hiking premiums and deductibles for a long time. Insurance premiums rose by 50 percent between 2003 and 2010 and the average deductible had soared by 145 percent. In 2013 average insurance premiums represented 20 percent of median income in 37 states, up from 2 in 2003.

Democrats could have responded to the Republican’s horror stories about price hikes with their own far more numerous and heartrending stories about the bankruptcies, deaths, and sicknesses caused by insurance companies denying or rescinding coverage. Rather than Democrats having to defend Obamacare, Republicans would have had the unenviable task of defending giant health insurance companies’ treatment of often-helpless individuals.

Obama ignored my advice. And in the 2014 election most Democrats refused to defend Obamacare. In Kentucky for much of the campaign Alison Grimes ran neck and neck with Mitch McConnell but when the issue of Obamacare came up she ran for the hills. As did virtually all Kentucky Democrats. According to Kantar Media’s Campaign Media Analysis Group, Republicans ran more than 10,000 broadcast television spots attacking the ACA in that state from January 2013 to November 2014. Kantar found only one positive television ad, from a Congressional Democratic candidate. Nationwide Senate Republican candidates ran 36,000 anti-Obamacare ads just from October 6-26.

In November 2014 Republicans gained control of the U.S. Senate. The number of Republican governors swelled to 31. The Republican Party won control of 67 state chambers, five more than their previous record in the modern era. In 24 states they gained total control, winning both the governor’s mansion and both chambers of the state legislature (Nebraska’s unicameral legislature is technically nonpartisan, but in practice Republicans control the chamber by a wide margin).

Would the 2014 election outcome have been different if the red states had held health care referenda? No one can tell. Certainly the election demonstrated that when given the opportunity to vote on issues rather than candidates Americans are often quite liberal. For example, voters approved every initiative to raise the minimum wage, including in red states (Alaska, Arkansas, Nebraska, South Dakota).

Democrats would still have had to overcome the cognitive dissonance of people like Robin Evans, a warehouse worker earning $9 an hour who after signing up for Medicaid is being treated for high blood pressure and Graves’ disease, an autoimmune disorder, after years of being uninsured and rarely seeing doctors. “I’m tickled to death with it,” she told the New York Times. “It’s helped me out a bunch.” But the Times adds, “Ms. Evans scowled at the mention of President Obama — ‘Nobody don’t care for nobody no more, and I think he’s got a lot to do with that,’ she explained — and said she would vote this fall for Senator Mitch McConnell, the Kentucky Republican and minority leader, who is fond of saying the health care law should be “pulled out root and branch.”   To summarize: The Democrats helped Mr. Evans “a bunch”. But under the Democrats nobody cares for nobody. So he will vote for Republicans who have railed against Democrat sponsored measures that would help him.

And then there is the distinct possibility that Republicans would have rejected an offer by President Obama to secede if they had to ask their voters to approve. They might have realized that a genuine public debate on the Affordable Care Act could make Americans wonder what else they were lying about. 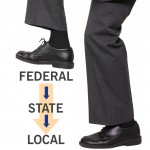 From the Desk of David Morris Who Decides?