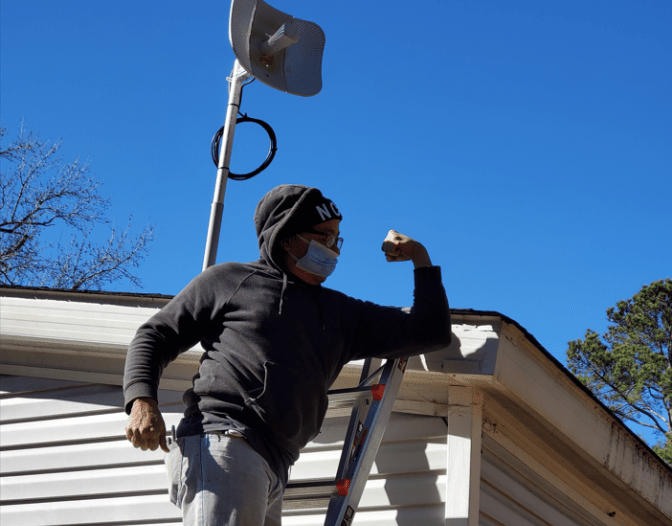 Historically, Enfield was known for its tobacco and peanuts. Today, there’s a new wave cresting in this small rural community in eastern North Carolina.

Thanks to a recent $350,000 investment from Connect Humanity, a start-up Internet service provider (ISP) – Wave 7 Communications – is now expanding its fledgling fixed wireless network to bring high-speed Internet service to nearly a quarter of the town’s 2,300 residents.

“This is in direct response to the need we identified,” Wave 7 CEO and Founder LaShawn Williamson told ILSR this week.

“We were finding customers who had Internet service before, but couldn’t pay the bill. We wanted to help people stay out of broadband debt,” Williamson said. “There is an older population here and lots of industry has moved out of town so there is a challenge with poverty. But everyone deserves access to the Internet.”

Creating a Wave of Affordable Connectivity

Before Wave 7 came along, the choices were either SuddenLink, CenturyLink, or nothing. But, as Williamson explained, a number of residents were “paying a lot of money for a little bit of Internet and going into broadband debt.”

It was a recipe for financially-strapped households to be cut off from service and left on the wrong side of the digital divide.

Initially, Williamson wanted to launch Wave 7 in Greensboro where she lives with her husband. In 2018, a tornado hit the city. “The tornado tore through here and knocked out the Internet. It was taking a long time to get back up and running and even when they did the service was frustrating,” she recalled. “So I began to wonder what it would take to start our own Internet company.”

A longtime entrepreneur who runs an event planning, management and marketing business, Williamson began to research how to become a local Internet service provider. The “aha” moment came when she saw a YouTube video posted by Graham Castleton, founder of a consulting service focused on helping public and private organizations bring better broadband to their communities.

Williamson connected with Castleton who led her to Deborah Simpier, co-founder and CEO of Althea Networks, which uses a “pay-per-forward model” and blockchain technology to enable “multi-stakeholder networks.”

Williamson decided to buy an Althea prototype and test it. What she found was that “the Althea model is ideal for rural communities” – at least for the rural community of Enfield where her husband was born and raised.

Although getting a network up and running in Greensboro “fell-through,” it didn’t stop Williamson from looking elsewhere. “Deb knew my husband was originally from Enfield and so she said: ‘Why not start there?’”

A two-hour drive from Greensboro, Enfield town officials welcomed Williamson and Wave 7 with open arms, allowing the upstart wireless ISP to set up its hub station at the town library, giving them access to a gig fiber circuit. The town also provided Wave 7 with rooftop access to several town buildings and two water towers so they could install relay equipment.

That was in February 2020. Four months later Wave 7 had its first subscriber. Over the next year, they acquired 20 additional subscribers. And then, thanks to a Truist Foundation grant, they were able to expand service to another 50 Enfield households.

With the infusion of a $350,000 blended investment earlier this month from Connect Humanity, Wave 7 now has the capital to buy the routers and fixed wireless antennas to extend service to over 400 households in Enfield and put Wave 7 in position to reach another 1,600 households in neighboring towns across Halifax County.

In a recent interview, Williamson spoke of Connect Humanity’s integral role and how much of a game-changer the investment meant for Wave 7.

Connect Humanity understands our pain points, can speak our language, and understand that in rural areas the economics are different and that bringing costs down is key for sustainability. The team understands that every case will be different — broadband is not a cookie-cutter thing. They’ve made the financing work for our model.

A Wave of High Speed Service and Digital Literacy

Now that Wave 7 has established itself in Enfield, subscribers can get high-speed Internet service using what is essentially a pre-paid service. The average subscriber pays between $40 and $80/month, depending on how much bandwidth they use. Williamson said most of their subscribers get 50 Megabits per second (Mbps) symmetrical service but can get as much as 150 Mbps symmetrical service, which is three times faster than what the duopoly incumbents offer.

It’s an attractive offer considering that the average cost of service from one of the national incumbent providers is $96/month in an area where 37 percent of families live below the Federal Poverty Level, resulting in less than a third of Enfield households having a home Internet subscription.

With Wave 7, subscribers have a fixed wireless antenna and router installed at their home at no cost to the subscriber. And with a pay-as-you-go model, subscribers “can control their own bandwidth and speeds if they choose to,” Williamson said, noting that when a subscriber’s account gets down to $2 worth of credit, a text message is sent to prompt them to load more money onto their router.

“But we never turn them off, even if they don’t pay the bill. Basically when they go to that tier, it’s minimal (service). They can do some surfing. But no streaming and gaming. But, at least the service is on,” Williamson said. “What I have found is that when they notice the buffering, they add money to their account because they want the speed. People find a way to get what they want.”

Wave 7 hires local technicians to do the installations and take care of any technical issues subscribers may have. Beyond that, Wave 7 has formed a partnership with a local non-profit, Community of Hope Center, to offer digital literacy classes and also provide scholarships to families with school-aged children to pay for laptops.

“We don’t offer TV service but we help people stream through devices like Roku. And we take the time to educate them on what the possibilities are. Also, we offer VOiP phone service,” Williamson said.

Admittedly, she said, the business is not very profitable. But, that’s not why they got into the broadband business. The intangibles are what Williamson finds most rewarding.

One of our most recent installs in September, we connected the Enfield Parks and Rec(reaction) Center. They had a different service but our service was so good that the director would go and park between the library and police department to use our signal and do her work, sitting in the parking lot.

The connection at the rec center wasn’t fast enough. But we were able to get her up and running and now she is so tickled to be able to sit at her desk and work. Last summer, she was in a parking lot. Next summer, she will be behind her desk and the kids who go there for summer camp will be able to access the Internet.

Stories like that have begun to spread across the community. Wave 7 has not spent much on marketing, relying instead on the power that comes through word of mouth in a small community.

While the story of Wave 7 in Enfield may not be the solution for every rural community, it serves as a shining example of what can happen when local digital equity champions push for community-driven solutions instead of relying on Big Telecom to meet the need of the moment.

Or as Williamson puts it:

When you surround yourself with the right people, you can get a whole lot done.

*CBN Director Christopher Mitchell is on the Advisory Board for Connect Humanity and helps lead the Tribal Broadband Bootcamps, which Connect Humanity hosts under its Indigenous Connectivity Institute. 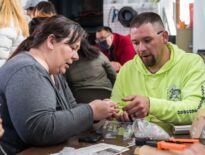