The garbage wars have begun. The well-publicized odyssey of the wandering garbage barge from Islip, Long Island in New York, is but the latest in a series of skirmishes that threaten the very political fabric of this country.

We live in an era of garbage imperialism. Washington tries to barge its sludge to Haiti. (Haiti declines to be dumped on, even by the capital of the free world.) San Francisco tries to toss its trash over the mountains in Yolo County. (The county refuses.) Philadelphia dumps its incinerator ash in Ohio, but local opposition forces the city to terminate that arrangement. This summer the City of Brotherly Love expects to start sending its ash to Panama.

The national waste disposal game looks more and more like a deadly version of musical chairs. Essex County, N.J., wants to send 4,000 50-gallon drums of radium-contaminated soil to Nevada. Gov. Richard H. Bryan angrily declared that his state is “not going to be a nuclear dumping ground for the country.”

Meanwhile, a federal judge in Boston holds that city liable for polluting Boston Harbor with 70 tons of sludge a day. The Massachusetts Water Resource Authority applies for a permit to dispose of its highly toxic sludge off the coast of New Jersey. Rep. James J. Florio (D-N.J.) ironically echoes Gov. Bryan, arguing that his state’s coastline should not become “the dumping ground for every state in the region.”

Our highways are becoming clogged with vehicles carrying increasingly deadly wastes. The Congressional Office of Technology Assessment estimates that more than 1.5 billion tons of hazardous wastes are moved each year, more than half by truck. Last fall rail cars began hauling the melted core of the Three Mile Island reactor across nine states. Forty shipments will move nine tons during the next 20 months from Pennsylvania to Idaho. “We’re concerned for people living along the route,” said Eric Epstein, of TMI Alert, a Pennsylvania watchdog group, “but it’s a relief. We were afraid of becoming the graveyard for the radioactive waste.”

And the federal Superfund has turned out to be just a way to pay for scooping up polluted soil in one place and depositing it in another.

Communities that seek legal relief from garbage imperialism meet with little success. A federal judge denied Gov. Bryan’s request for an injunction in the Nevada dumping case. In 1982 the U.S. Supreme Court ruled that New Jersey had no right to stop Pennsylvanians from dumping their garbage in the Garden State. When New York City banned trucks from carrying radioactive waste through its congested streets, the U.S. Supreme Court overturned the ordinance. The right of localities to protect their citizens, the court maintained, is outweighed by the constitutional right of commerce to move freely across state boundaries.

Garbage wars stem from our refusal to take responsibility for our own wastes. They will end when we force ourselves to take that responsibility. We should enact federal and state legislation to require that all wastes be disposed of within 10 miles of their generation. This would apply to mines, factories, households and office buildings.

Such legislation would have two salutary effects. First, it would significantly improve decision making by imposing the costs as well as the benefits of commerce on the same community. Those who reap the rewards would accept the risks. You want nuclear power. Fine. You handle the radioactive wastes. You want to burn your garbage. Fine. You handle the hazardous ash residue. You want to be the site of industrial facilities. Fine. You clean up the heavy metals.

The second benefit is that communities and businesses would be forced to seek lasting solutions to the waste disposal problem. No longer would we spend considerable financial, political and scientific resources to discover safe ways to move our wastes far away. Instead, we would first look for ways to reduce waste and recycle the ones we must produce into useful products.

By focusing our energies in this way we can all but eliminate our waste disposal problem. The amount of garbage that must be buried could be reduced by up to 80%. By changing our manufacturing methods we could reduce by up to 99% the amount of toxic wastes generated by industry. Indeed, European engineering schools already teach “low and no-waste” design approaches. Innovative sewage treatment systems that remove heavy metals are now commercially available.

But innovative solutions will never be implemented if we can pursue the easier path of shipping our problems to someone else’s backyard. Regrettably, our politicians, while increasingly aware that a civil war threatens over this issue, do not seem to be learning the right lesson. For them the proper course is to find a community that will be a willing receptacle.

Oceanic experts foresee that in the short term a primary use of the oceans will be for waste disposal. Seventy percent of the globe is water. More important, fish don’t vote.

Garbage Imperialism Must Stop: Let’s Force Cities to Keep Wastes in Their Own Backyards 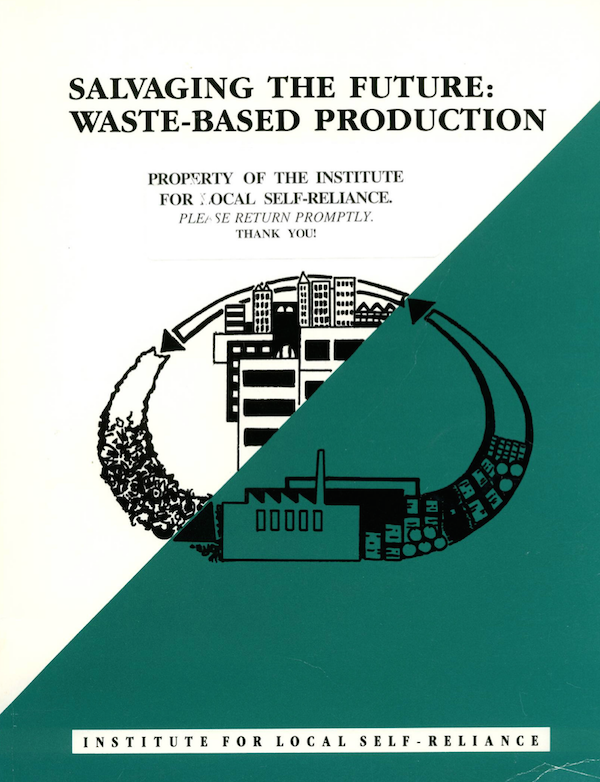