Retail workers in the U.S. are making $4.5 billion less each year due to Wal-Mart’s presence, according to a new study by the University of California’s Center for Labor Research and Education.

The study, ” A Downward Push: The Impact of Wal-Mart Stores on Retail Wages and Benefits,” begins by analyzing the effect of new Wal-Mart stores on local wage rates. It focuses on stores that opened between 1992 and 2000 and concludes, “Opening a single Wal-Mart store lowers the average retail wage in the surrounding county between 0.5 and 0.9 percent.”

Not only did Wal-Mart lower average wage rates, but “every new Wal-Mart in a county reduced the combined or aggregate earnings of retail workers by around 1.5 percent.” Because this number is higher than the reduction in average wages, it indicates that Wal-Mart not only lowered pay rates, but also reduced the total number of retail jobs. That finding is consistent with a major study published earlier this year that found that the opening of a Wal-Mart store causes a net loss of about 150 retail jobs.

Until now there have been few studies documenting Wal-Mart’s impact on wages. Those that have been done have examined only a small number of communities and have not been able to distinguish the effects of Wal-Mart’s arrival from the particular conditions that attracted the retailer to those locations in the first place.

The fact that Wal-Mart does not choose new store locations randomly poses a significant methodological challenge. Wal-Mart’s expansion strategy, for example, may be to build stores in communities that have strong economic prospects. These places are likely to see better-than-average wage growth. Unless a study accounts for this location selection bias when comparing wage growth in towns that gained Wal-Mart stores with those that did not, it might mistakenly conclude that Wal-Mart caused an increase in wages.

The new study resolves this problem by tracking Wal-Mart’s outward expansion from its corporate headquarters in Arkansas. “By following the ripple of store openings across the country and over time, we are able to test whether retail wages fell in its wake,” the authors explain.

The researchers go on to look at the cumulative impact of Wal-Mart store openings on retail earnings at the state level and nationwide. “At the national level, our study concludes that in 2000, total earnings of retail workers nationwide were reduced by $4.5 billion due to Wal-Mart’s presence,” they find.

Most of these losses were concentrated in metropolitan areas. Although Wal-Mart is often associated with rural areas, three-quarters of the stores it built in the 1990s were in metropolitan counties.

Another new study from the UC Center for Labor Research and Education indicates that Wal-Mart could substantially raise its workers’ earnings, particularly those living at or near poverty, with little impact on most shoppers. ” Living Wage Policies and Wal-Mart” analyzes the effects of instituting a $10 minimum wage at Wal-Mart. More than half of the retailer’s employees (56%) currently earn less than $10 an hour.

“We find that 46.3 percent of the pay increase would go to workers in families with total incomes below 200 percent of the federal poverty level,” the study finds. “These poor and low-income workers could expect to earn an additional $1,020 to $4,640 a year.”

This raise would increase Wal-Mart’s total payroll by 9.3 percent a year. In 2006, that would have worked out to an additional $2.38 billion spent on payroll. Wal-Mart had $11.2 billion in profits last year.

Although this raise could be absorbed through reduced profit margins and increased productivity derived from more satisfied workers, the study examines the impact of passing all of this increase on to shoppers.

The study concludes that a Big Box Living Wage Ordinance, like the one passed by the Chicago City Council but vetoed by the mayor last year, “would provide significant, concentrated benefits to workers, almost half of them in poor or near-poor families, while the costs would be dispersed in small amounts among many consumers across the income spectrum.” 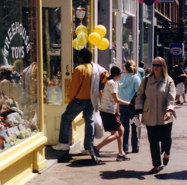 Retail Give a Gift To Our Economy: Shop Locally Owned Thi…
Sign Up for the Hometown Advantage Newsletter