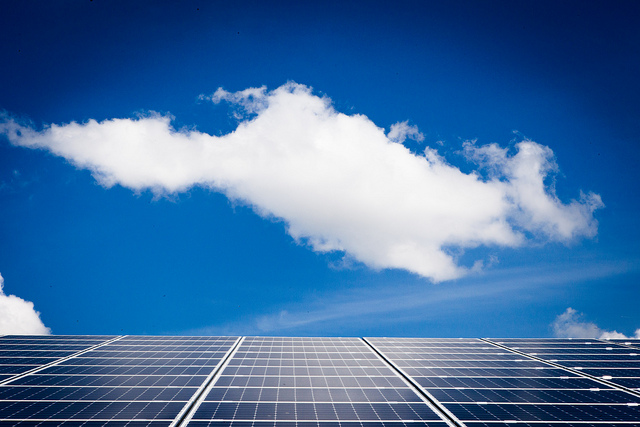 I’m visiting the wonderful folks from Sustainable Tucson in Arizona next week to talk about the opportunities that solar and clean energy offer their local economy. In preparation, I’m looking at their current monopoly electricity provider, Tucson Electric Power. Remarkably, the utility acquires just 4% of its electricity from renewable resources (and over 70% from coal), despite being at the heart of the best sunshine in the country. The red arrow shows Tucson on this map of the nation’s solar resource.

Despite a world-class resource, the city’s utility intends to avoid major solar investment by pretending it is too costly.

The utility’s 2014 resource plan suggests that it hasn’t grasped (or refuses to seize) the opportunity. Although they forecast growth in renewable energy by 600 megawatts (MW) in the next 15 years, it’s only half the capacity increase they intend for natural gas (1200 MW).

Why shortchange solar? It’s pretty easy when you dramatically exaggerate its cost.

But for a sunshine resource, TEP’s calculation is a bit shady.

For starters, it includes a component for “system integration and backup costs” for 5.2 cents per kWh. This means that TEP implies it must build or buy backup generation for any moment that the sun is not shining at maximum capacity.

Here are several reasons that this line item is total crap:

In other words, TEP has falsely inflated the cost of solar by 45% percent.

Cutting that single line out, we have a remarkably different picture. Now solar at 11.1¢ per kWh is competitive with the proposed natural gas plants at 8.8-11.9¢.  Keep in mind that almost all the solar costs are upfront and that fuel costs are a guaranteed zero, whereas any volatility in natural gas prices will be passed through to ratepayers. See below for a retrospective on natural gas price volatility (with Energy Information Administration price forecasts) and solar price volatility. The irony is that TEP is completely upfront about a forecast doubling of gas prices by the end of the 15-year planning horizon (p295), but since those costs pass through to ratepayers… 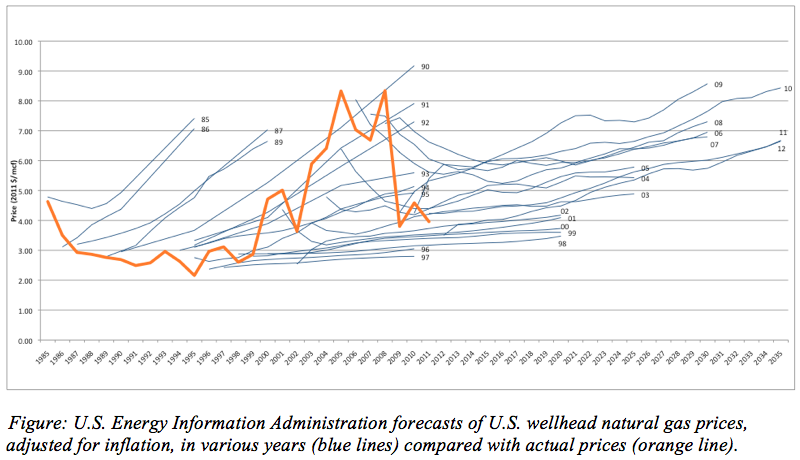 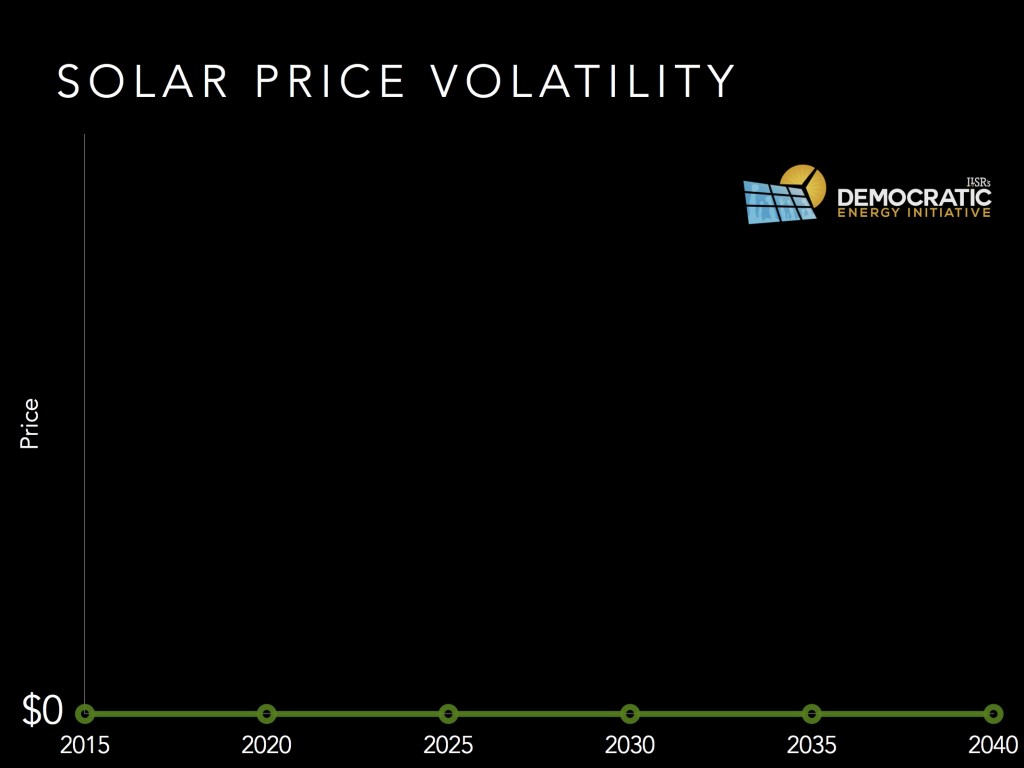 A price of 11.1¢ seems more reasonable, but compare it to the System Advisor Model from the National Renewable Energy Laboratory. This software package models the solar resource and cost for the entire country, and its default values incorporate years of data tracking on solar costs.  Not including any incentives, and with a capital cost that’s 15% higher (per Watt) than the $1.99 used by TEP, the model spits out a levelized cost for solar of 7¢ per kilowatt-hour. Throw in the federal 30% tax incentive and the model suggests that the breakeven price for a 1 megawatt solar array in Tucson is 4.5¢ per kilowatt-hour, 60% lower than TEP’s figure!

But don’t rely on cost modeling. Five years ago, Pima County signed a power purchase agreement for a solar array at the Roger Road Wastewater Reclamation Facility for just under 10¢ per kWh. It has another contract for the 5 MW Prairie Fire Solar Plant to buy electricity for 9.3¢ per kWh. In 2014, Chief Contracts & Procurement Manager Terry Finefrock says the county signed another purchase agreement for solar at Green Valley for 5.7¢ per kWh (which compares to the the 4.5¢ figure from the model above plus a small margin).  In other words, Tucson residents and businesses can already buy solar for one-third the cost the utility suggests in its official resource plan!

The following chart illustrates the remarkable gap between the utility’s solar cost estimate and the real world cost. (graphic updated to correct the name of the solar project supplying low-cost power.  It’s Green Valley, not PECOC). 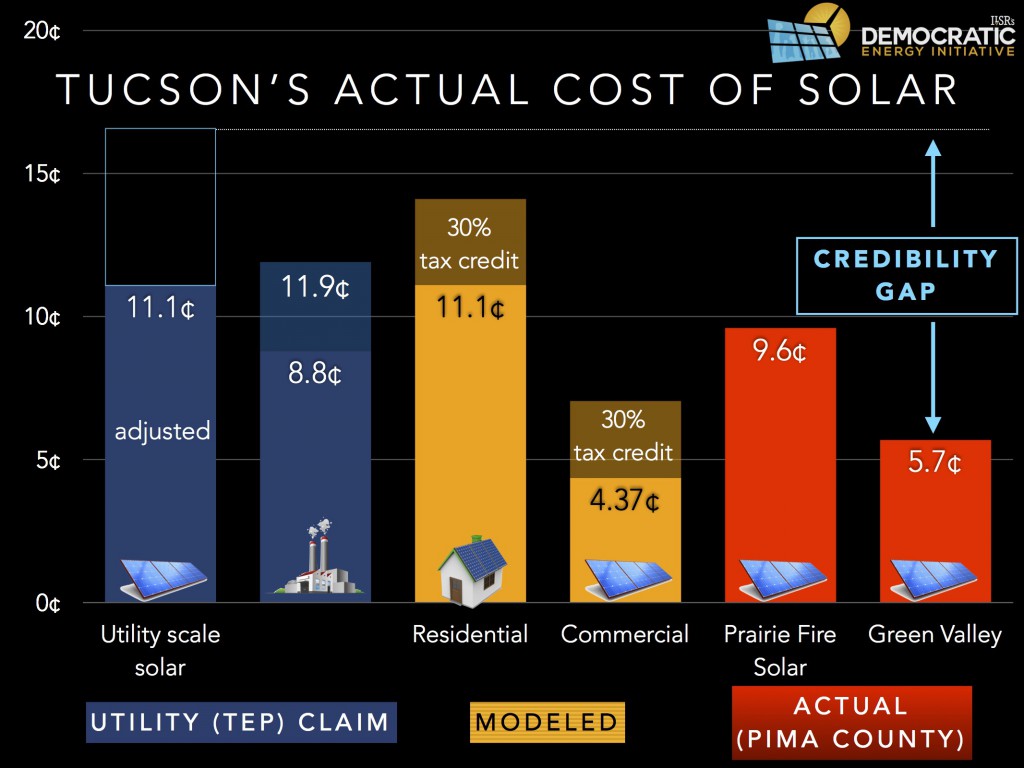 By now, it should be clear how utilities make solar look expensive. They obfuscate, they hid behind “grid stability” and “variability,” they exaggerate.

Like many incumbent monopolies, TEP sees its business model about to founder on the rocks of distributed power. Conservation and energy efficiency are reducing revenues. Distributed solar is giving customers unprecedented opportunity to diversify their energy supply, undercutting sales and demand for new power plants (the latter is the revenue and profit lifeline for shareholder-owned utilities). The impending fiscal crisis is the result of a utility regulatory system that pays TEP to play the wrong game. TEP can’t maintain profits for its shareholders if its customers can slip from the monopoly grasp.

But rather than explore business models compatible with low-cost solar, TEP implies that solar is too costly and doubles down on last century’s business model. Their resource plan will commit billions of dollars to new fossil fuel infrastructure that will take decades for Tucson customers to repay. It will require approximately 1.7 billion gallons of water per year for new natural gas power production. And finally, it will undermine the city’s hope to reach net zero greenhouse gas emissions by 2040 because the new power plants will be operated until 2070 or beyond.

There’s almost no place in America where solar is cheaper than in Tucson, but its electric utility seems poised to deliberately ignore the opportunity for clean, local, and cost-effective energy production. And we know why.

How and Why Utilities Make Solar Look Expensive 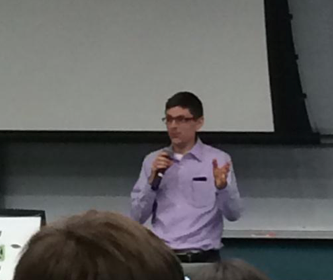 Energy Could Solar Shine in a Tucson City-Utility Partner… 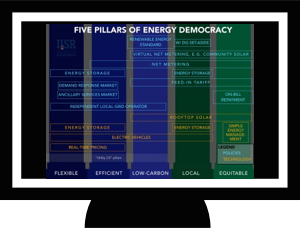