Four years have passed since ILSR’s initial report on utility-owned rooftop solar and this 2019 update shows small growth but some potentially large repercussions. This update rehashes the costs and benefits, updates the progress of the four initial programs, highlights a few new programs, and discusses the wider implications.

Still Worse for Customers Than Self-Ownership

In 2015, ILSR profiled four few large utilities that had proposed programs to own rooftop solar arrays, and in exchange customers sharing their rooftops would receive a credit or payment on their energy bill. While convenient for consumers due to the lack of an upfront cost, the deals disproportionately benefited the utilities. The following graphic, from ILSR’s 2015 post, illustrates the difference in value to the customer between the utility-owned rooftop solar programs provided by Arizona utilities and a customer owning their own rooftop solar array. 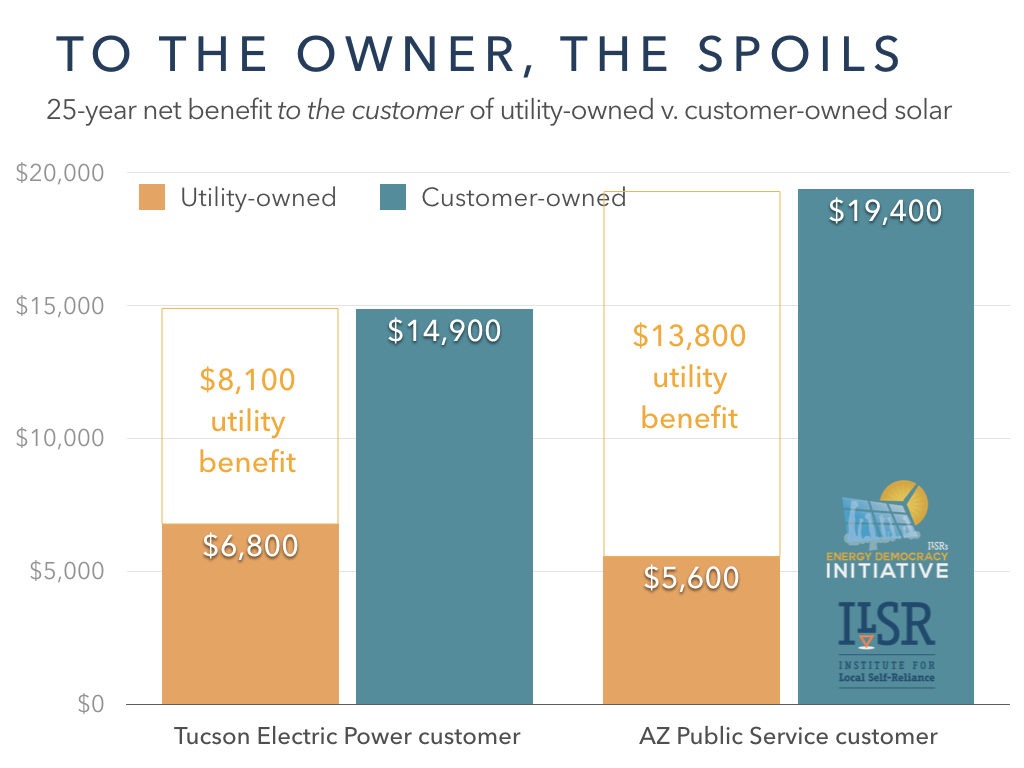 In 2015, ILSR showcased four utilities in the early stages of offering a utility-owned distributed generation program. This list provides a status update on the four originally profiled programs:

Other Utilities Testing the Waters

Several utilities have launched new pilots since our initial investigation (and ILSR uncovered one earlier program we missed).

The following map illustrates where utilities have operated or plan to operate rooftop solar programs. 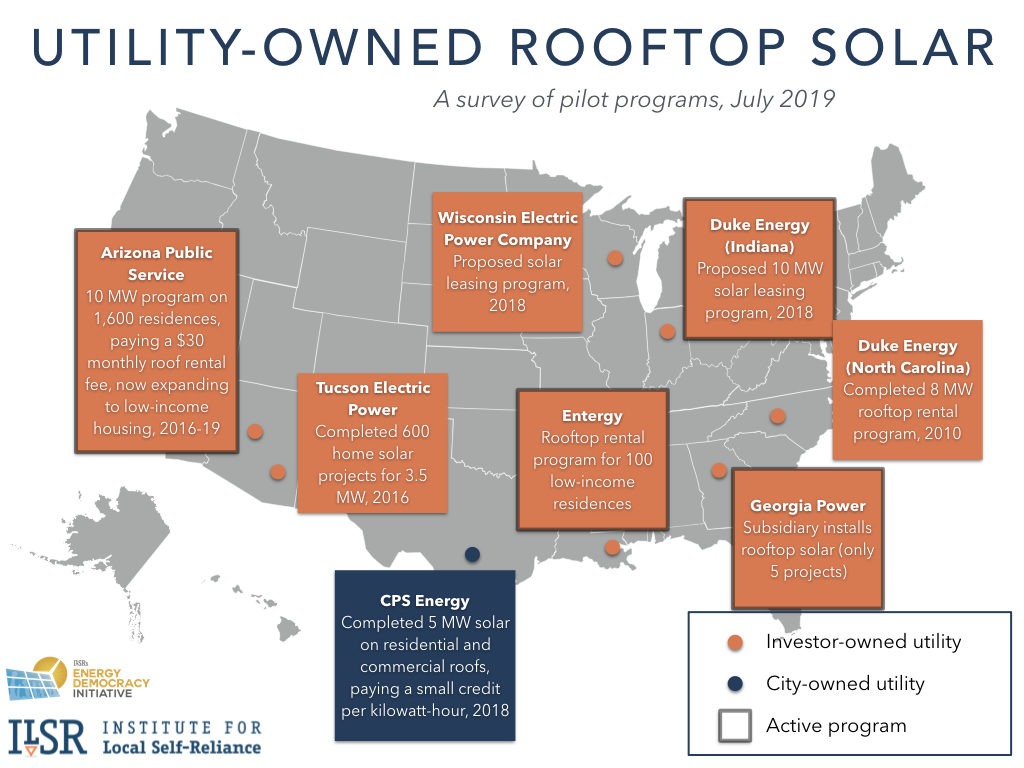 Despite a small surge several years ago, few utilities have shown much interest in owning rooftop solar. There are several potential explanations for the mild interest despite significant growth of rooftop solar:

Even Utilities That Promote Rooftop Solar Lobby Against It

Many utilities engage in active lobbying campaigns against rooftop solar, including every single one with a utility ownership program. In 2017, the New York Times highlighted the slowing growth of rooftop solar in a piece called “Rooftop Solar Dims Under Pressure From Utility Lobbyists.” Indiana provided a particularly effective case study:

“Indiana’s five investor-owned utilities are among the biggest contributors to Indiana’s elected officials, together giving at least $3 million to mostly Republican candidates over the past four election cycles, according to campaign finance filings. They are also known to play an outsize role in drafting energy-related bills.”

Duke Energy Indiana, now proposing a utility-owned rooftop solar program, was among the utilities lobbying to kneecap customer-owned solar. Its North Carolina subsidiary has similarly lobbied to slow a competitive solar market. We Energies, proposing a rooftop leasing program in Wisconsin, has been cited in Midwest Energy News as “[reluctant] to approve interconnection for third-party-owned installations” and “in the past has said customers with solar are not paying their fair share for grid upkeep and are unfairly passing costs on to others.” Both Arizona utilities with utility-owned programs have lobbied to reduce the financial viability of customer-owned solar. Entergy has lobbied against a key rooftop solar policy, net metering, in Arkansas, and was recently exposed for paying actors to mislead the New Orleans city council in a bid for a gas plant. Even city-owned CPS Energy used the announcement of its utility-owned solar to complain of the perceived costs of customer-owned solar.

A Clear Conflict of Interest 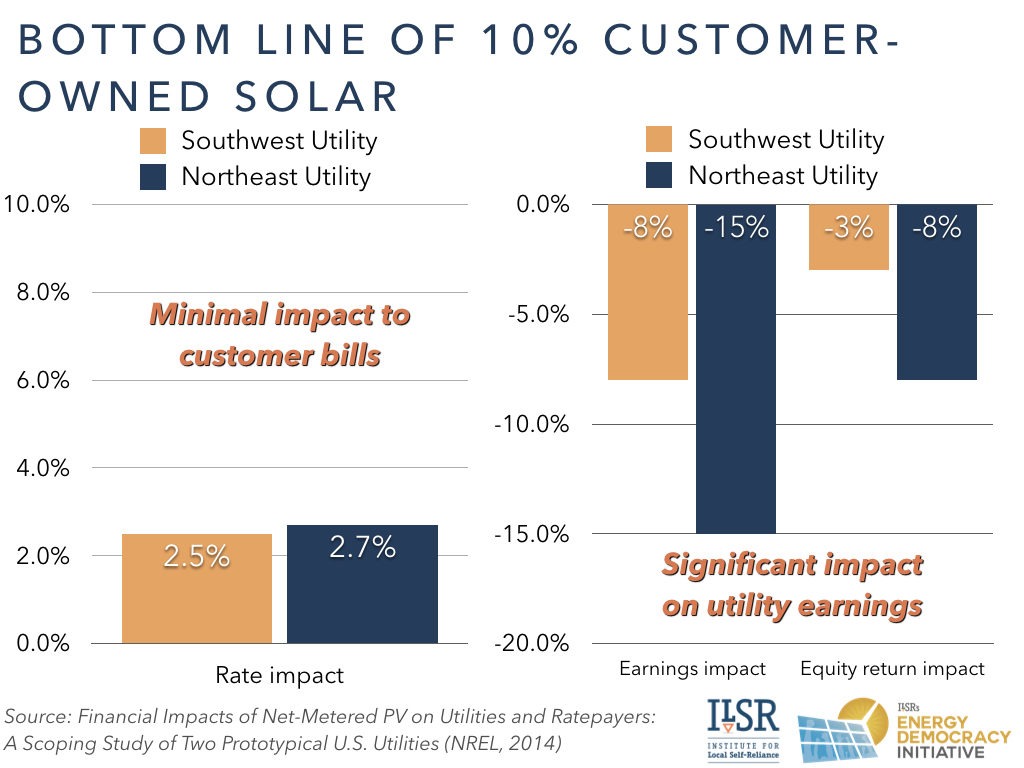 Other states, like Georgia, prohibit the regulated monopoly utility from owning distributed generation, requiring the utility to create an unregulated subsidiary that must compete with third party solar companies.

Utility-owned solar programs may not be crowding out the competition in the rooftop solar market, but they act as a powerful arm of the monopoly utility’s marketing department that requires regulators and legislators to pay careful attention.

Utilities Bid to Own Rooftop Solar Even As They Oppose It 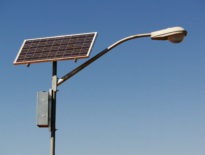 Energy Lights Out? Not for This Michigan City – Episode… 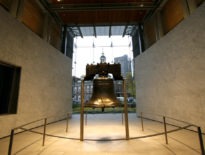 Energy Voices of 100%: Can Philadelphia and its Suburbs R…
Sign Up For Energy Democracy News