More than 300 locally owned businesses in Utah kicked off a Buy Local First campaign this week with nine days of special discounts and events.

“Everybody is doing discounts,” said Betsy Burton, owner of The King’s English bookstore and co-organizer of the campaign. “We’re offering 15 percent off at 15th and 15th, if you say, ‘I buy local first,'” she said, referring to the stores along the main intersection in her neighborhood.

Business owners hope the discounts will encourage people to give local stores and restaurants a try, rather than heading straight for the chains. The service is better, the group says, and the prices are generally more competitive than people think.

Plus, as the campaign’s brochure explains, local businesses are more committed to Utah, contribute to the state’s character and sense of place, and put more of their revenue back to work in the local economy.

Participating businesses are displaying Buy Local First Utah window decals and bumper stickers, distributing brochures, talking with their customers about the importance of locally owned businesses, holding contests and drawings, and directing people to the campaign’s web site, which has a searchable directory of local retailers.

At a press conference to launch the campaign, business owners were joined by top local and state officials. Salt Lake City Mayor Rocky Anderson, long an outspoken supporter of local ownership, signed a proclamation officially designating it “Buy Local First Week.” Martin Frey, director of the Governor’s Office of Economic Development, also spoke, noting, “You don’t find our culture in some of the national chains. When our local communities prosper, everyone in the state prospers.” 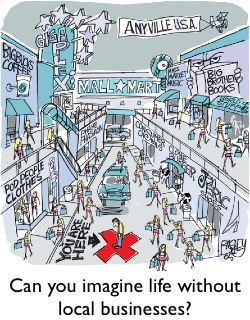 The campaign has been the subject of major stores in Salt Lake’s two daily newspapers and many local television and radio programs.

Between the media attention and the collective marketing efforts, Buy Local First Utah is helping to level the playing field for small businesses, which lack the advertising muscle of the chains, said Dean Pierose, owner of Cucina Deli.

Many local business owners see the value. “We’re getting four to five new businesses joining each day now,” said Burton. “We think we’re going to be at 500 [members] by the end of the year and we hope to hit 1,000 next year. This issue of community is so important suddenly.”

“People have seen the destruction wrought by chains, and they’re realizing that their communities are in danger,” said Burton, noting that the number of general independent bookstores in Salt Lake City has dropped from eleven to two. “You cast a vote every time you spend a dollar. And every vote you cast helps to shape your community.”

Buy Local First Utah is affiliated with the Business Alliance for Local Living Economies and the American Independent Business Alliance, both of which offer how-to kits and advice on starting buy-local campaigns.

Retail Is your community on Wal-Mart’s list?
Retail Arizona Lawmakers Pledge to Ban Big-Box Subsidies…
Sign Up for the Hometown Advantage Newsletter