I learned last week from Murray Fox that there is an effort to revive the National Recycling Coalition (NRC) by former NRC leaders. I wish them well, and would greatly appreciate an NRC that is not dominated by large corporations.

Gary Liss feels it is an “important time to carefully rethink how we want our national recycling organizations to function, and learn from mistakes of the past to better meet the huge challenges and opportunities we have today.”

I agree. But some common misunderstandings should be corrected as we explore future organizational models.

By the mid l980’s the NRC abdicated its role as the ‘voice of recycling’, although that was the intent of the 400 grass roots recyclers (non profits and for profits) when we organized in Fresno in l980. The NRC marginalized the grass roots agenda as the soda and beer corporations, the waste conglomerates, and their consultants, dominated the organization. As soon as important grass roots initiatives were put forward, their committees were disbanded, the issues permanently tabled. Critical issues such as container legislation, reuse and waste incineration were not allowed on the agenda of any NRC events. The NRC became a damper on the development of recycling.

The driving force of the US recycling movement was and remains at the local level — for and not for profit enterprises, environmental education and activist organizations, wilderness and hunting groups, civic and community development organizations, ad hoc citizen groups, small business associations, computer and zero waste clubs, independent haulers, elected officials and civil servants. Our national recycling organizations need to reflect this reality.

The fact that numerous multi-billion dollar corporations refuse to sustain the NRC shows the difference between their level of commitment to recycling as compared to the commitment of grass roots recyclers and our deep support networks.

The recycling movement will not miss a beat as the NRC, in its current form, closes shop.

The Grass Roots Recycling Network (GRRN) was formed in l995 exactly because the NRC was not acting as the voice of recycling that we wanted. For several years, the NRC allowed the GRRN to organize forums and conference sessions for stimulating conference content. In 2002, NRC stopped helping GRRN in that way and shortly afterwards closed down its Landfill Subcommittee that had actively engaged EPA to improve the regulations of landfills.

This year, once the NRC cancelled its annual meeting, GRRN stepped in immediately and organized a National Recycling and Zero Waste Conference in Devens, MA on October 18-21 to ensure that the needs for sharing information in the field are realized. GRRN will continue to provide Zero Waste conferences and other regional meetings through their COOL2012 Campaign to get organics out of landfills throughout the next year.

Another organizing effort is underway. Veteran recyclers, including Jerry Powell, Marjorie Griek and Jack Debell, are forming the Recycling Organization of North America (RONA). State recycling associations and professional organizations remain as active as ever. New working models for local, regional and national cooperation are in the offing.

The country’s green and climate consciousness plus the need for jobs and local economic growth, the expansion of our cities tax base and the need to cut costs, has positioned reuse, recycling and composting perfectly in the market place. Investment in the recycling industry is expanding. Resource recovery industrial parks are under construction. New rules on electronic and food scrap; yard and C and D debris are creating local and regional markets for over 65% of the municipal waste stream.

Financial incentives to businesses and households are driving materials to this expanding infrastructure. This will allow diversion from the waste stream, now at 32% nationally, to double within the next few years, providing economic and environmental benefits to the entire country, and the planet. Many cities and counties are already at the 65% diversion level and higher.

This will all happen without the NRC. The future of recycling in the US is LOCAL not in ASIA.

Yet another area of activity is growing rapidly at the state and local levels: Extended Producer Responsibility. St Luis Obispo County, CA has required the take back of hazardous materials by manufacturers. Other state rules attempt to keep valuable materials in the local economy. By insisting on PRODUCER responsibility over PRODUCT responsibility, the recycling movement is shifting the burdens of ‘unfunded mandates’ on manufacturers, just as minimum content legislation has done for the past two decades.

There is plenty still to accomplish. particularly at a time when our national leaders are proposing new rules that reinstate subsidies to incineration and landfill of discards, but none for recycling, composting and reuse. Let’s welcome the GRRN, RONA and a revitalized NRC to this next phase of our movement.

*Neil Seldman is co-founder of both the NRC and GRRN. He resigned his membership in the NRC circa l985. He resigned from the board of directors of GRRN in 2006 but remains a volunteer advisor to the board and an active participant in GRRN events throughout the US.

Thoughts on the National Recycling Coalition 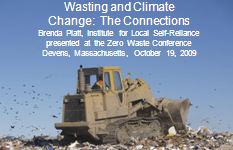