Energy production from renewable sources continues to expand in the U.S. at a rapid clip, thanks in no small part to the substantial growth of solar energy—and distributed solar in particular—in recent years. More states than ever are making solar a priority. But where have these gains been greatest, and what are the economic implications for residents from one state to the next?

States with policies supporting a larger proportion of distributed energy from small-scale, often locally owned solar, give their residents and businesses big energy savings and their local economies an economic boost, more so than when solar investments are left to incumbent, often investor-owned utilities.

An updated map of the size of each state’s solar market (in yellow, orange, and red) and pie charts showing the corresponding share of distributed solar (1 megawatt and smaller) illustrates how this state-by-state landscape has changed since our original analysis published in 2016. 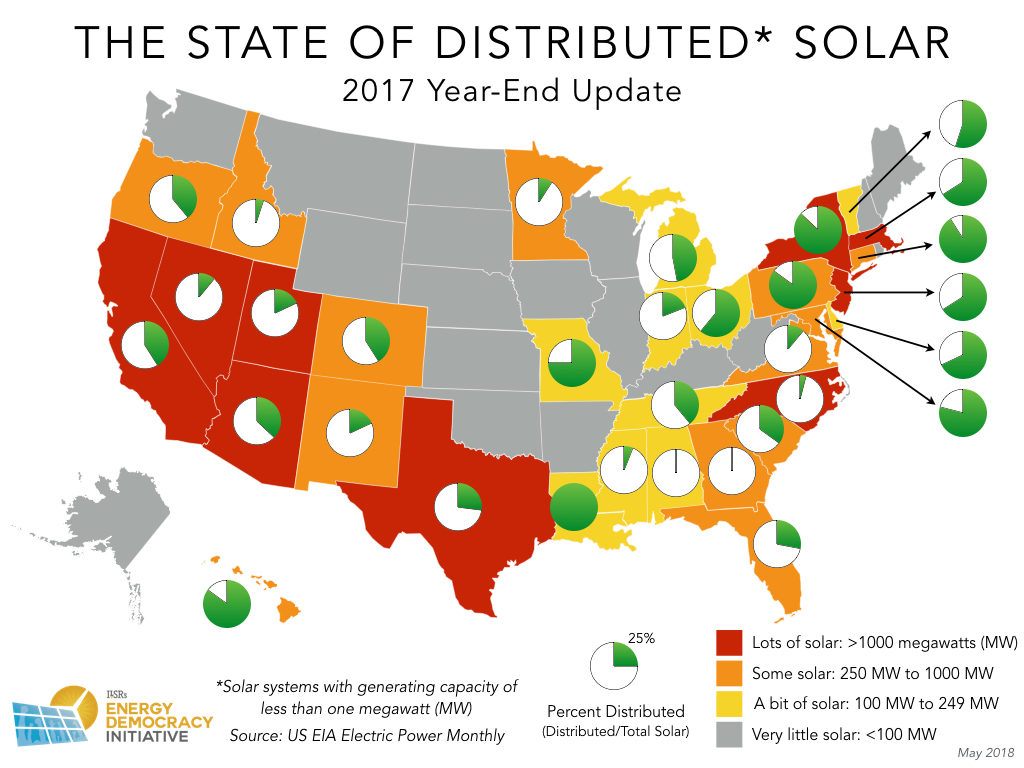 A majority of states—32 to be exact—now boast at least 100 megawatts of solar power in their energy mix, up from only 20 states two years ago. Even with this expansion, similar regional patterns in the state-by-state landscape remain: 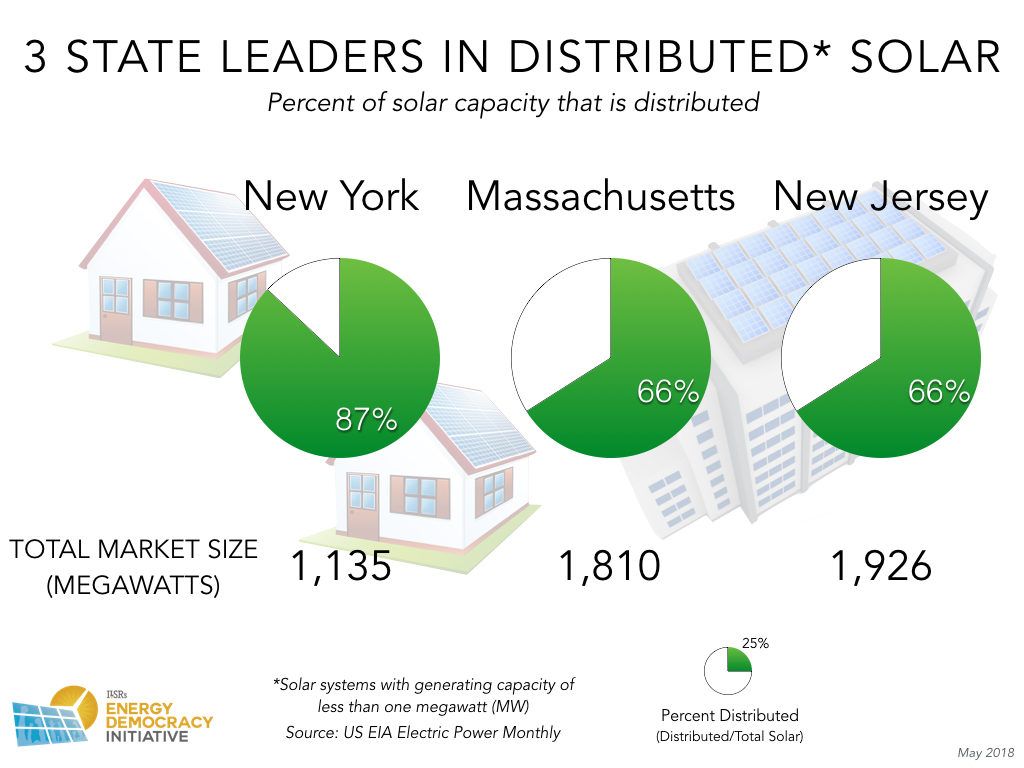 When one accounts for the mix of state-level policies that help or hinder distributed solar, factors underlying these statistics become even clearer. In recent years, New Jersey, Mass., and New York, the three leaders in distributed solar, have each expanded policies, such as net metering and power purchase agreements, that are favorable to distributed generation, while keeping attacks from their incumbent, monopoly utilities at bay.

Even in states that have not yet claimed a majority of solar power from distributed sources, there are still examples of important policy shifts that can increase the rate of growth in distributed generation moving forward. For example, in California, the nation’s leader in solar power capacity (with nearly 16,000 megawatts, 41 percent of which from small-scale sources), recently passed a landmark solar homes rule that will couple distributed solar with all new home construction, when it takes effect in early 2020. Meanwhile, Minnesota has pursued a different tactic to keeping generation local, broadening access to solar energy beyond those who own homes through the nation’s leading community solar program.

Over time, these and other state policy strategies that prioritize distributed generation in their solar and energy markets will work to the benefit of residents, particularly as small-scale solar pays off and brings more substantial local benefits than its utility-scale alternative.

With the solar energy tax credit’s future settled by Congress, solar energy has the green light to continue expanding across the U.S. But who benefits from solar depends heavily on state policy. Do states encourage distributed solar deployment and the democratization of energy or simply leave solar growth up to incumbent utilities?

The inset map illustrates the size of state’s solar market (in yellow, orange, and red) with a pie chart showing the percentage of distributed solar (1 megawatt and smaller) based on 2015 data.

The focus on the size of solar is important because solar is inherently the most distributed renewable energy resource. Sunshine falls everywhere, and solar can be economically harnessed at nearly any scale. Distributed solar has particular benefits to the electric grid that large-scale solar does not, from lower energy losses by avoiding long-distance power transmission to reducing variability of solar (passing clouds rarely cover entire states, for example). Many states are starting to examine the true value of distributed solar like Minnesota has done.

But beyond the economic benefits, solar also enables a transition from energy monopoly to energy democracy. When electric customers become producers, they also become decision makers in the grid system. As the grid transforms (as with New York’s Reforming the Energy Vision process), these customers will be able to transact with one another and the grid to make it more innovative and efficient). With the coming of economical distributed energy storage, customers may hold the keys to the future of the grid.

Customers may be able to hold the keys, but only if states require the incumbent monopoly to relinquish them. As we can see in the five states from the above map where installed capacity exceeds 1,000 megawatts, policy matters. In four of them (Arizona, California, Hawaii, and New Jersey), policies protecting local authority and encouraging individual ownership of PV arrays have created an environment amenable to greater distributed generation throughout the United States.

A record 7.3 gigawatts of new solar arrays were installed in 2015. Although the majority of new installed capacity came from utility-owned arrays, residential rooftop solar grew 66% last year (with per 2 gigawatts installed) and distributed commercial solar also continued to grow. But many utilities are frightened of a future with more customer choice and control and are fighting back. They’re rolling back net metering laws in Nevada and adding fees to reduce the financial benefit of solar in Arizona.

Is the future energy monopoly or energy democracy? The states may decide.

The State(s) of Distributed Solar — 2017 Update 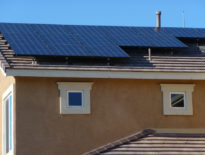