Local communities in the state of Mississippi have the legal authority to develop publicly owned Internet networks and offer broadband, or any other utility, to the general public. When it comes to bonding in order to financing deployment for broadband infrastructure, however, the law isn’t as cut and dry. In order to stay on the right side of the law, the community of Columbus, Mississippi, decided to obtain permission from the state legislature to issue bonds for a $2.75 million expansion of their existing fiber optic network. Things didn’t work out as well as they had hoped, thanks to powerful lobbying influence in Jackson.

Rep. Jeff Smith is Chair of the House Ways and Means Committee and introduced HB 1741, which would have granted permission for the city of Columbus to issue bonds to fund the infrastructure for better connectivity. Smith, who is also a board attorney for Columbus Light and Water (CLW), filed the bill because past opinions from state Attorneys General conflict on interpretation of the law. Bond attorneys told the utility board that the safest way forward would be to approach the Mississippi State Legislature for permission to bond. The bill was directed to the House Local and Private Committee, but never received a hearing before the committee deadline of March 28th. According to Smith, HB 1741 had necessary support in the House, but Senate leadership would not let the bill advance:

"We were told lobbyists from Comcast and the other big cable providers had sat down with (Lt. Governor Tate Reeves) and encouraged him to kill three similar bills," Smith said. "He's the president of the Senate so ... when we heard that we knew it wasn't going to make it."

When compared to the lobbying forces of Comcast, AT&T, and other national Internet access providers, CLW and the city of Columbus can expect to be outgunned at every turn. Large companies with millions to spend on experts well-versed at convincing state Senators not to take up bills such as HB 1741 have an unfair advantage. With the financing and manpower to spend many hours on one subject, convincing a powerful lawmaker who has limited access to information to maintain the current situation is not a difficult task. Monopoly ISPs have been cementing their positions from state capitals for years.

While Mississippi Senators won’t take up the subject of bonding for the community of Columbus to offer better connectivity, they’ve decided that cooperatives can provide Internet access. The General Assembly two bills this session that remove existing restrictions preventing electric cooperatives from offering Internet access. In early April, elected officials sent SB 2 to Governor Bryant, which will remove legal barriers and, although it has not been signed yet, is expected to take effect this summer. In January at a bill signing ceremony where he signed the Mississippi Broadband Enabling Act, Bryant declared:

"This is a success for the Mississippi Legislature, for all those involved…If anyone wants to know how this bill got passed so quickly talk to the rural electric associations, because we do, and we listen to them."

The changes that allow electric co-ops to offer Internet access in Mississippi is a step in the right direction. Nevertheless, the inconsistency hasn’t been lost on those that want to review Smith’s proposal for Columbus. "That doesn't make sense because we passed a bill to allow co-ops to do basically the same thing,” said Senator Chuck Younger. Smith said that next year, the plan will entail a bill aimed at allowing all local communities the right to bond for broadband infrastructure. Perhaps by then, lobbyists will have lost some of the influence they now wield in Mississippi. In a few other states, such as North Carolina and Arkansas, state lawmakers have moved to relax some of the restrictions that have prevented local communities from investing in local networks and expanding broadband access to people and businesses.

Thinking Ahead in Columbus

Like other municipal electric utilities, CLW already has some fiber infrastructure in place for internal communications. CLW began considering offering Internet access and voice service first to local businesses and possibly later to residences. Last fall, CLW surveyed approximately 2,500 local businesses; most of those that returned the survey responded that they would be interested in connectivity from CLW.

“We found then that there was definitely interest," [CLW General Manager Todd] Gale said. "There were a lot of people saying they'd switch. And even now, I have people on the street asking when we're going to start selling that service."

"In order to keep our rates down, we have to stay competitive," Gale said. "There has already been interest and we already have the fiber for it. It makes sense to take an asset we've already paid for and make good use of it."

The city has already conducted a feasibility study and determined that they’d need at least 600 subscribers to break even, with 200 needed in the first year. They may not have permission to bond from the General Assembly, but Columbus is floating the idea of finding other ways to finance the project. CLW are considering interdepartmental loans and an incremental approach. The board has not made final decisions, but if CLW can develop a workable plan, they may start construction before the end of the year. Columbus also hasn’t given up on bonding in the future to expedite deployment. While they may once again face the power of the big corporate lobby at the General Assembly, they’ll have at least a year to build alliances, better educate lawmakers, and rally constituents. Smith is open about his intentions for next year’s session:

This article was originally published on ILSR’s MuniNetworks.org. Read the original here.  Photo of Columbus via visitcolumbusms.org 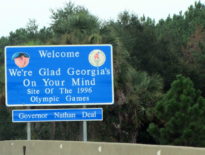 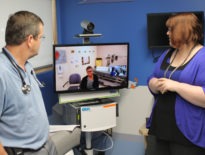 MuniNetworks More Than Sending X-rays: What Telemedicine Can Do…
Sign Up For Community Broadband News