With the now-expected passage of the financial reform bill, giant banks see a golden opportunity to finally put the financial crisis, along with their culpability for wrecking our economy, in the rearview mirror.

“We are very pleased to have this certainty and closure,” declared Steve Bartlett when the House-Senate conference committee had finished negotiating. Bartlett is the president of the Financial Services Roundtable, a powerful big bank lobbying group that would like nothing more than to make this legislation the one and only policy response to the banking system’s catastrophic failure.

It’s up to all of us to make sure that it is not.

The economic crisis is not over, and the rot and malfunctioning at the heart of our banking system remains. Indeed, since the collapse, giant banks have only grown bigger and more powerful, and less responsive to the needs of the real economy. While the financial reform bill includes several worthwhile measures, it will not set the industry right or entail a fundamental alteration of its scale and structure.

It leaves us at best only modestly less vulnerable to another meltdown. And it fails utterly to confront a deeper problem: even in the best of times, our banking system does not serve us very well. The two main reasons to have banks, after all, are to facilitate the growth of businesses and help families build assets and financial security. Yet, its hard to find more than a trace of these core functions on the balance sheets of the giant banks that now dominate the industry.

Instead, much of what big banks have been up to over the last two decades has involved devising ways to extract ever more wealth from households and the real economy. They’ve saddled their own customers with high fees and dangerous products, swindled borrowers and investors, orchestrated corporate mergers that harmed employees and even shareholders, and cut off the flow of credit to small businesses while channeling ever more investment capital into derivatives and other complex gambling schemes.

In short, big banks have not been facilitating the real economy so much as consuming it.

What would a banking system truly aligned with the interests of households and businesses look like? For one, it would be composed primarily of small, locally owned banks and credit unions. Unlike big banks, local financial institutions devote nearly all of their resources to core banking activities, namely taking deposits and making loans. Their fortunes are thus inextricably linked to the well-being of their depositors and borrowers. They prosper only when their communities do.

It wasn’t that long ago that most Americans banked at local institutions. As recently as the 1980s, they held a majority of our deposits. But big banks and their allies in Congress have spent 25 years rewriting the nation’s laws to their own benefit. By 1995, the share of U.S. deposits held by small banks and credit unions had dropped to 34 percent and a brand-new class of supersized banks had emerged. Today, these giant banks — there are 19 of them, each with more than $100 billion in assets — have taken over nearly half of U.S. deposits, while the share held by small banks and credit unions has fallen to 21 percent.

This transformation succeeded because so many in Congress, undoubtedly predisposed by campaign cash from Wall Street, bought into the bigger-is-better dogma pedaled by Alan Greenspan, Robert Rubin, and the like.

But it turns out that small is in fact superior by nearly every measure.

Take, for example, small business lending, the lack of which is now impeding economic recovery. Although the crisis made it worse, the availability of credit for small businesses has been shrinking for some time. That’s because big banks do relatively little small business lending (see this graph). One reason is that they are not all that good at it: the computer models these vast corporations must rely on to evaluate loan applications are not very adept at gauging the nuances of risk associated with a particular local enterprise in a particular local market.

Local banks generally excel at this. Their lending decisions are made by people who are intimately familiar with local market conditions and who spend time getting to know the borrower and his or her enterprise. This enables them to better assess risk and to successfully extend credit to a broader range of small businesses. Indeed, research has found that, all else being equal, regions with more small banks are home to more small firms.

Or consider the idea, often touted in 1994 and 1999 as Congress dismantled long-standing rules restricting the growth of banks, that bigger banks would lower costs for consumers. In fact, interest rates are generally better at small banks and credit unions, studies have found, and fees are an astonishing 20-30 percent lower on average than at big banks. And most offer the same array of sophisticated services, from online banking to credit cards, that big banks do.

How can it be that small banks are such a better deal? Bigger is suppose to deliver economies of scale, after all. But economists have found that, in fact, banks peak in efficiency when they reach the size of roughly $5 billion in assets. Beyond that they become weighted down by bureaucracy and actually operate less efficiently.

Today’s giant banks are orders of magnitude larger than what economies of scale alone would dictate. Bank of America is 468 times that optimal size — which suggests that it is not market forces that have spawned these behemoths. Rather, their dominance owes more to their political power and the many subsidies that flow to those deemed too-big-to-fail.

So how do we change course and revive a banking system that is more local and responsive to the needs of communities? Ultimately, Congress must deliver another round of reform that tackles the problem of bigness head-on. That may seem a tall order given the current political dynamics, but it’s worth remembering that the stronger aspects of the reform bill actually gained support as the process wore on. That’s highly unusual and may bode well for future rounds. It’s also worth noting that it took Franklin Roosevelt years to enact his full suite of banking reforms.

The best way to spur Congress to act, however, isn’t to wait around for it to do so. We can and should take financial reform into our own hands.

That means moving our money — and not just our savings, but our borrowing too. Tens of thousands of people have already broken up with big banks and moved to locally owned institutions. Although the cascade has not yet been large enough to make a sizable dent in the finances of big banks, it has already been a boon to many small banks and credit unions, which are seeing a surge in deposits and lending.

Second, we must rally our state governments. Despite intense lobbying by big banks, the financial reform bill preserved a fair degree of state regulatory authority over banks. States should hold banks to a higher standard. Good policy models can be found in Vermont and, believe it or not, Texas, which have long prohibited many of the mortgage shenanigans that precipitated the crisis. Both states have suffered fewer foreclosures as a result and now have unemployment rates well below the national average.

Another smart move some states are beginning to consider is establishing a publicly owned “bankers’ bank” modeled on the Bank of North Dakota. By serving as a secondary market for loans, BND has helped North Dakota’s community banks thrive. The state has more local banks per capita than any other. And while that’s not the only reason North Dakota escaped the Great Recession, it hasn’t hurt.

As much as Citigroup, Goldman, and Chase may wish it to be, the overhaul of our banking system is not over. Round two begins now: in our wallets, our communities, and our state governments.

Taking Financial Reform into Our Own Hands 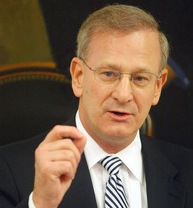